What is the meaning of a police car with no department or logo in the USA?

While traveling in the Southwest, I saw on two different occasions police cars that were painted all black, with no writing or logos on them. One was an older style of a police car, the other was a muscle car that looked brand new. They had all of the features of a police car, such as the lights near the windshield, bars for crashing at the front, antennae, but no markings anywhere, just black paint. The drivers also looked like the police.

Do these kinds of cars perform a special role? They seem useless as undercover vehicles.

Since they aren't marked, do I need to still follow their instructions, such as pulling over?

These are called unmarked cars - sort of a compromise between a marked car and a fully undercover vehicle. The idea is that they're somewhat less easy to spot than a marked car, yet still have all the same equipment when it's needed.

They are very common, though the laws around their use may be evolving.

Yes, by law you do need to follow their instructions. If you are uncertain whether it's a genuine police car or an impostor, you can call 911 to verify.

I’m surprised nobody has mentioned what I believe to be the more common answer:

Once a police department is finished with a car that has become too old, the department often removes its markings and auctions it off.

If you don’t see any government markings anywhere (such as the license plate), I’d guess it’s no longer a police car (based on my experience in the southwestern USA), and the chances of the driver instructing you to do anything (i.e. impersonating a police officer) are very low.

But if someone in such a car did announce that they were a police officer, and they did not have an official uniform on with a badge, I'd call 911 and report them (since officers in an unmarked police car must be in full uniform, at least in certain states—I recommend researching the particular state you're in). 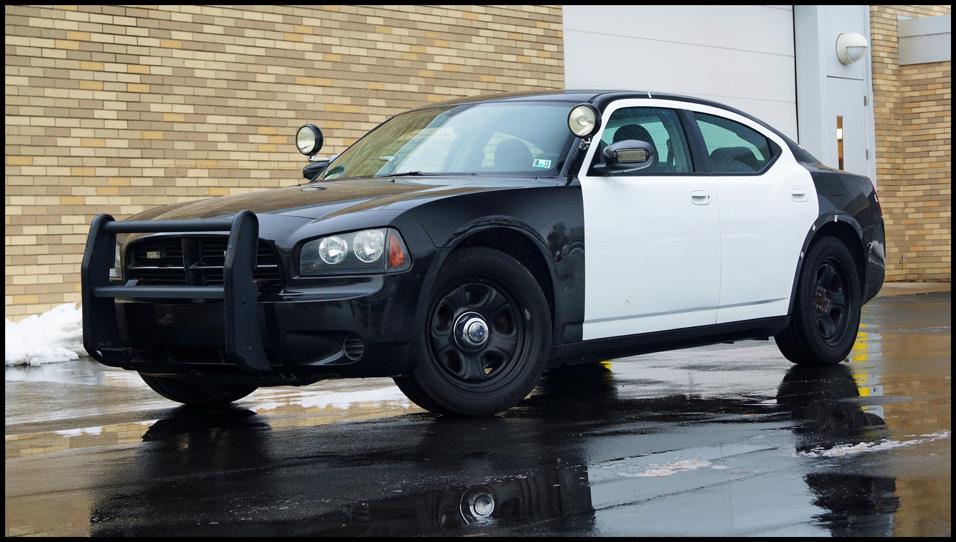 GovDeals and Public Surplus are the kings of online auctions and regularly liquidate cop cars for local municipalities. There are thousands of cars to choose from, ranging from mint-condition cherry rides that have barely been put through their paces, to those unfortunate many that have been smashed to hell and have potentially fatal amounts of bodily fluids staining the seats.

Currently, in the United States and Canada, the paint scheme for each fleet is determined either by the individual agency or by uniform state legislation as in Minnesota. Usually, state laws exist that establish standards for police vehicle markings, and proscribe civilian vehicles from using certain markings or paint schemes as is the case in California.

Today, most fleet markings on patrol vehicles are created from reflective vinyl with an adhesive backing that is applied in a peel-and-stick manner. Colors chosen to represent the departments identity are typically chosen by the individual department, although, as noted above, some states have specific guidelines for color schemes and markings.

Police cars are frequently not painted with traditional police markings. They are typically used to blend into traffic or other roadside cars. That way, people who are speeding may be caught unaware as they speed past them. Cautious drivers may even slow down when seeing any car parked alongside the road. On some roads that are notorious for speeders, police departments may even park empty marked police cars to deter people from speeding. In any case, if you receive orders or directions from a uniformed police officer, or a police officer not in uniform who displays his badge or ID, you must obey them. Their mode of transportation is irrelevant.

There is another case that may occur and that is UTC (Uniform Traffic control). Sometimes it is needed for a police officer to be part of a traffic plan in a private run project (even if publicly funded such as repaving or traffic light replacement). The cases I have been involved with the general contractor will hire a traffic control contractor who will hire traffic control supervisors, flaggers (I did this summers in college) and UTCs. The UTCs are off duty police officers wearing full uniform (including badge and gun) but without access to the department's car, so the traffic control contractor owns (or leases) mostly equipped police cars (they don't have prisoner retention facilities or departmental radios) that are provided to the UTCs. Depending on local rules some UTCs may not issue tickets (jurisdictional issues), but they can call for backup and they can arrest you. You should follow their instructions (as well as flaggers and traffic control supervisors) as failure to do so is a ticketable offence (failure to obey a traffic control officer, similar to failure to obey a stop sign).

Publicly run projects use on duty police for their UTCs with departmental cars.

Another situation not yet mentioned would be cars used in motion picture and television production. I saw one on the road which I would guess was returning after a shoot, and had all of its insignia roughly scratched off and also had some moderately-small signs in the window saying "MOVIE PROP CAR". The signs were large enough to be read, but small enough not to obstruct the driver's vision. If a car is driving to a film or television shoot, I would expect that the crew might hold off on applying the insignia until they reach the location of the shoot, but if features like lights would need to stay on the car during stunt maneuvers, they would be securely attached at the shop before the shoot.

Not the answer you're looking for? Browse other questions tagged usa officials or ask your own question.

14
Are foreigners allowed to take a police ride-along in the US?
34
How to deal with the fake police scam in Spain?
1
Why is I-20 issued by the Department of Justice, not the Department of Homeland Security or the Department of Education?
10
What happens if police stops me when driving a rental car and I'm not the authorized driver (US-FL)?
8
Do the Macedonian police issue visitors a registration card?
29
Can I call 112 to check a police officer's identity in the Czech Republic?
3
When does a foreigner's police escort from the elite Special Police Unit (SPU) have to escort the foreigner in Somaliland?