Ask Question
Asked 9 years, 5 months ago
Active 6 years, 4 months ago
Viewed 518 times
10
Closed. This question needs to be more focused. It is not currently accepting answers.

I'm thinking about visiting Spain sometime in September or October.

I'm interested in hiking, nature and historic architecture and am constantly looking for great photo opportunities.

Which parts of the country would be most suitable for me in terms of weather and sights?

The Pilar Festival is held every year around the second week of October in Zaragoza. The festival features a huge flower offering on October 12th in which thousands of flowers are piled into a gigantic pyramid in the center square next to a huge basilica. It's a great photo op.; here's a (not so good) picture I took of the flower pyramid from last year's festival: 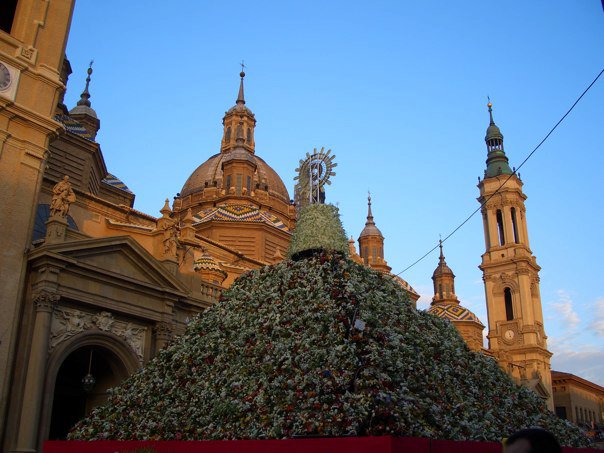 The festival is also accompanied by a number of cultural performances, parades, concerts, bull fights, &c.

Edit: In terms of weather, it depends what you're looking for. I've been all around Spain in different seasons, but when I was there last fall we primarily toured in the North (Madrid → Zaragoza → Atxondo → San Sebastian/Bilbao → Elciego/Rioja → Segovia → Madrid). About 10% of the days there was rain, and it would sometimes drop down to the mid-teens (Celsius) at night, but it was generally quite pleasant weather. I wore a light jacket most of the time. The South would have been noticeably warmer.

You are looking to walk the Camino de Santiago. It joins hiking, nature, historic architecture, photo opportunities and is very cheap (eat about 6-8 € per meal and sleep 4-8 €). Additionally, you'll know the real Spain, meet interesting people (mainly Spanish, but you can find people from around the world and you will complete one of the mythical mid age routes.

Fall is a great moment to go. Spring is better, but winter and summer are worst because the extreme temperatures.

One thought if you can do end of August - La Tomatina in Bunol near Valencia is quite the fantastic photo opportunity, as is the wine and water festival in La Requena nearby the night before ;)

Spain has a wealth of hiking areas, Asturias, Cantabria, Galicia and the Basque Country offer amazing landscapes. Some people call them the Switzerland by the Sea. Sites worth visiting for hinking, landscaping and taking photographs: - Cordillera Cantábrica 1. Lagos de Covadonga (Asturias) 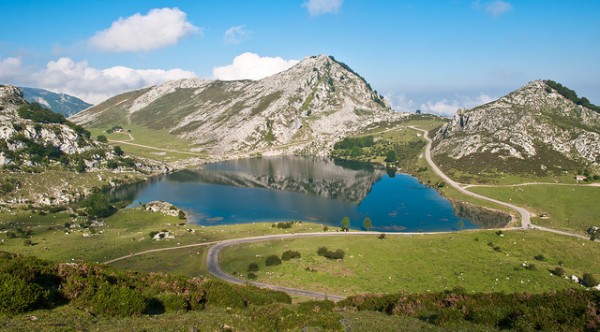 The Pyrenees and the Ebro region are Spain’s most popular and accessible hiking regions, assisted by the abundance of winter sports resorts and ski-lifts that whisk you to the mountain tops.

Cabo de Gata in Almeria is a good place to get in touch with nature. You have a lot of natural sights, you can do scuba diving, hiking and so on. Besides the weather in September and October usually is quite good.

The Pyrenees mountains are a great choice for hiking and nature sightseeing. In particular, the catalan side north of Barcelona, where the mountain meets the sea is worth a trip and thousands of photos.

Not the answer you're looking for? Browse other questions tagged planning sightseeing nature-and-wildlife spain hiking or ask your own question.

13
What are must-visit destinations for the first time trip to Argentina?
12
Long walking trails in Europe with accommodation enroute

18
What is a good hydration system for hiking Kilimanjaro?
7
Must see places while going through Germany (middle section)
11
“Circular” hiking trails in Iceland?
6
What is a good Lake District base for hiking?