Are there alternatives for booking flights unavailable directly via the airline (but available from an Online Travel Agent?)

This year I had something happen to me twice, which I never witnessed before nor I thought possible: An airline has flights for the legs that I'd like to fly on, but if I try to book the whole trip, it only proposes me a more complex trip with an extra leg. In the meanwhile, the desired booking is possible on an OTA website.

I presume that this might be because OTAs have access to more inventory, but this seems weird. The two examples were:

London to Yekaterinburg: I flew with British Airways + S7. They are partner airlines and S7 can sell me the London-Moscow leg of the trip, but S7 was only offering me a more complex trip (something like: London - Berlin - Moscow - Yekaterinburg)

London to Longyearbyen: I booked a SAS trip with Layover in Oslo (cancelled due to Covid19), but the SAS website was only offering me trips like: London - Copenhagen - Oslo - Longyearbyen or London - Stockholm - Oslo -Longyearbyen

In the above cases, I booked from an OTA, but I'd really prefer to avoid in the future (in one direction, my luggage couldn't be checked-in all the way through even if that went smoothly on the way back. I got multiple check-in codes for the same booking, and making changes is just overall much more painful if a travel agent is involved).

I just managed to find another example (again, for Longyearbyen: just an example, since I'm not currently planning of flying there in September): 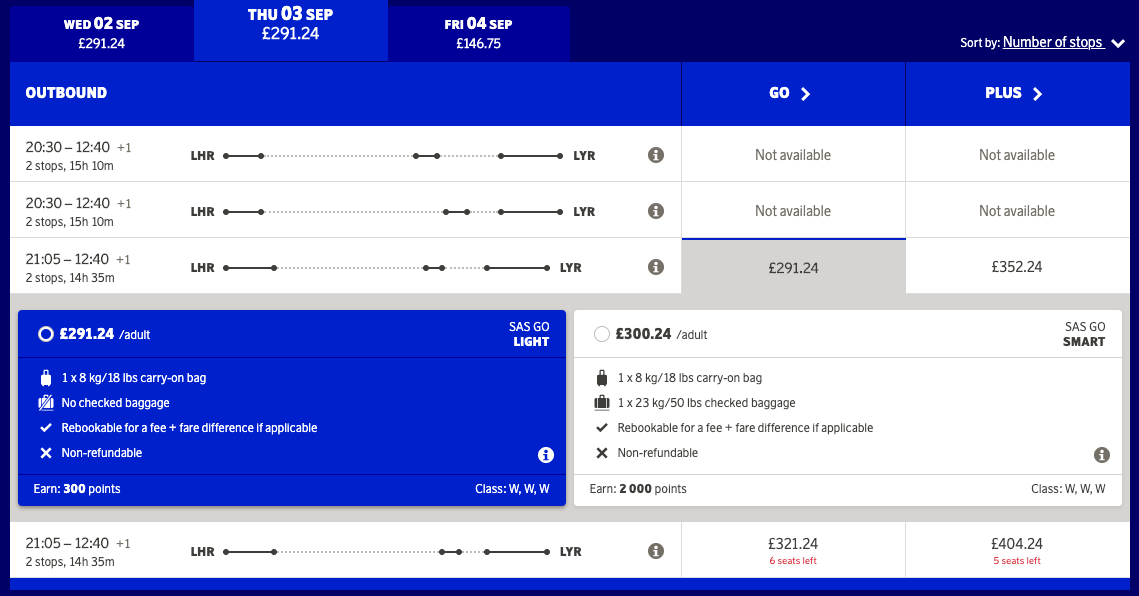 As you can see, for the day only trips with 2 layover are offered.

But I checked on 4 different OTAs, and all of them are offering a booking with a single layover: 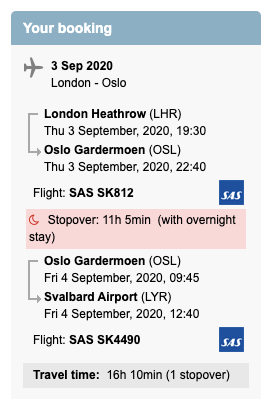 This seems even weirder, when you consider that the single legs are actually available for purchase on SAS itself: 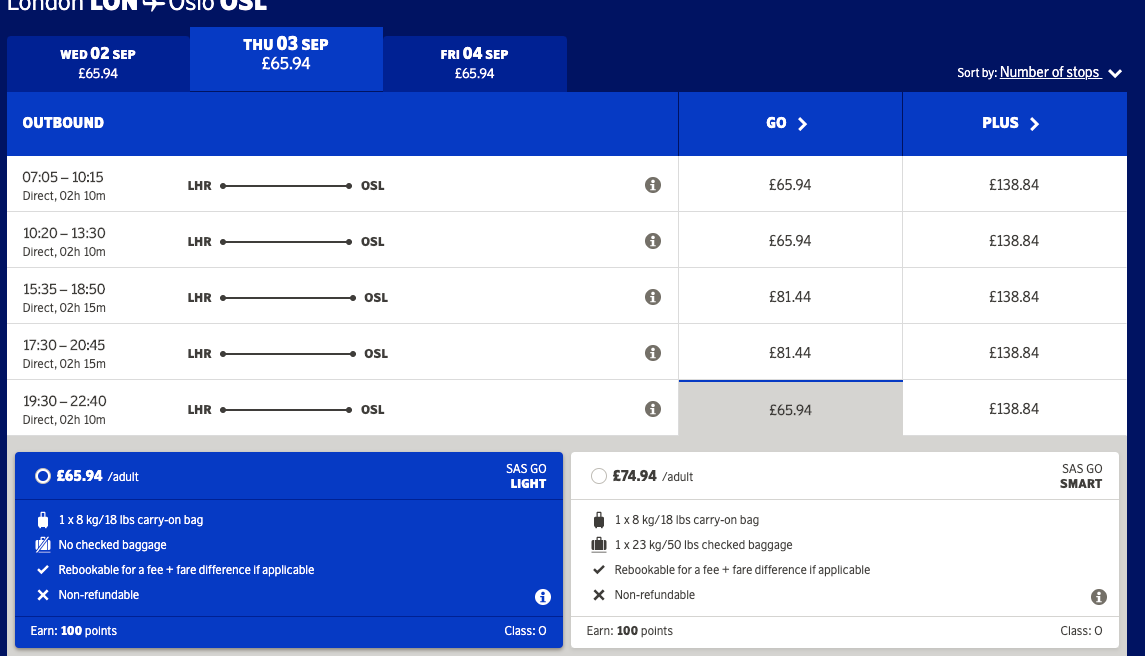 But somehow, SAS doesn't allow me to purchase this trip directly with them.

How common is this? Are there other solutions besides booking via an OTA? Would I be able to maybe get the booking done by directly calling the airline? (and if so, would this be standard practice, or should I expect it to be hit and miss depending on the airline?)

If the search tool is an in-house product, it may be inferior in an absolute sense compared to something like ITA's QPX search, which many OTAs now use. Writing a search algorithm for airline flights is a terrifically hard problem (formally it is classed as "undecidable"), and airlines don't hire the kind of computer scientists who can solve it efficiently. Specialists like ITA have hundreds of computer scientists.

Alternatively, an airline's search may be tuned with different preferences to an OTA. A lot of airlines try to avoid overnight stops, even if that would be preferable to three flights at a higher price. I would guess that's the cause of your SAS problem here.

(and if so, would this be standard practice, or should I expect it to be hit and miss depending on the airline?)

Sometimes, additional inventory is available in the city where the travel agent is based, compared to where the airline is calculating the price. To understand why that can be the case, you should know that "how many seats left for sale on a plane" is a function of the sales city as well as other factors. Airline websites, in my experience, usually price from the city of origin, whereas agents usually price from a fixed point. One way to see this is from the payment currency, which will invariably be the currency of the sales city. For instance expedia.fr prices out of Paris, regardless of whether the itinerary passes through that city.

This only seems to matter when the flight is filling up.

Ticket issuance restrictions in the fare

Sometimes, the airline really cannot sell you the trip. This may be because the trip comprises multiple fares and one of the fares has a restriction that it must be issued "on the stock" of a ticket airline. Stock here refers to the old fashioned 4-part carbon paper tickets, but the concept is directly implemented in electronic ticketing. For instance, looking at a cheap S7 fare from London to Yekaterinburg:

Even though a BA plane will fly you the first leg from London to Moscow, BA could not sell you a journey involving this particular fare. Airlines always sell tickets on their own "paper", not as agents for another airline; in this case, BA sells tickets on BA plate (ticket number starting "125-") and S7 sells tickets on S7 plate (ticket number starting "421-"). But a travel agent could pick any validating carrier with whom it has a ticketing agreement, subject to the fare rules and the agreement. So the travel agent has some additional flexibility.

This really only matters when you have a particularly complicated trip with multiple airlines who don't partner together very closely.

Not the answer you're looking for? Browse other questions tagged air-travel layovers travel-agents or ask your own question.

6
How do I find out whether I am allowed to / have to disembark from a flight that transits at an intermediary airport?
30
Airline and Travel Agent disagree on baggage allowance, who do I need to resolve it with?
4
Can you get a refund of "additional charges" in addition to taxes?
1
Extending a layover to the next day
0
Round trip or two one-ways better if outbound might be cancelled?
4
Getting refunded for a flight which I'll be prevented from boarding
2
Why booking services never consider MIA for transfers?
3
Boarding passes when going through long layovers / stopovers?