My father's US visa will end this month. What can we do, if the virus is not better? He will have to fly from Phoenix to Stuttgart, Germany! He is healthy, following all the rules, right now, he is 94 years old!

Is he likely to get a visa extension? Can he fly back to Germany safely?

In the US, an expired visa does not mean expired legal status.

You can check HERE when his status expires - if he actually holds a visa, it may be a lot later.

If his status is indeed about to expire, he needs to consult a qualified physician. They, if need be, can issue a certificate, with which you can visit a CBP Deferred Inspections office in order to be given a "Satisfactory departure" extension of 30 days, but I'm unsure about anything beyond that.

Your father is in a vulnerable segment regarding COVID-19. On the current progression, the situation in the US is not likely to be stable by the end of April 2020.

If he can get an extension, it would be the best. If you can afford that, it's best to apply for that.

If you choose to return to Germany, it is best to do it now, rather than later. Flights are running even though with a very limited amount. The situation is still evolving. We cannot eliminate the possibility of a situation like in India, with full lock down, including flights and all public transport. Take the necessary precautions and get out when you can.

Consult a doctor over the phone and validate whatever your plan is and do that.

I think the question is which option is safer. Sure, being on a plane in close proximity of others is problematic, but it's important to consider the comparative level of safety in the US and Germany.

For example, in the US, at least 3,921 people have died (around 12 per million), whereas in Germany it's 732 (around 9 per million). However, these numbers change daily and are not the best indicator of where we're headed. In the same sources, however, you'll find these graphics: 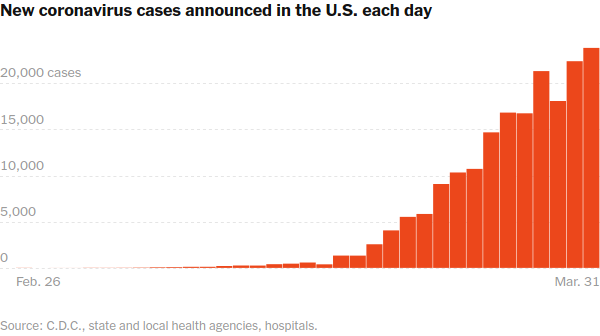 This implies that the turning point between exponential growth and saturation is already in the past in Germany (however, it may return to exponential growth, if for example people resume their pre-corona habits), but not in the US.

An often used metric is also the hospital beds per capita. Wikipedia lists a higher number for Germany, however, ICU beds are fewer per capita in Germany than in the US. Also, I couldn't find reliable data on ventilators, which may be another important metric.

Not the answer you're looking for? Browse other questions tagged visas usa overstaying event-based-effects covid-19 or ask your own question.

39
What to do when visa admission expires during lockdown?
1
Safest Way to Fly from France to Kansas

5
How should I apply for a Schengen visa from the UK?
13
Expired visa, can I still fly inside the US without risk?
1
My old passport expired and was unused. As an Indian citizen, would I need it while applying for a visa to Japan in Taiwan?
6
How do you know if you have a 10-year ban for overstaying in the USA?
1
I am travelling with a renewed passport and my US visa is in my old passport which I forgot in the US. What are my options?
0
How to extend a visa in Shenzhen (or elsewhere)
4
Hubby lost his (UK) passport in Germany yesterday and we are due to fly to the USA on Tuesday. Can he get a visa to go with his ETD?
2
Overstay in Serbia
2
Travel to USA again - COVID-19 delays