Direct flights between cities with the same name

One can fly from London (YXU) to London (LHR) (via Toronto), from Glasgow (GGW) to Glasgow (GLA) (multiple stops), or from Moscow (PUW) to Moscow (SVO) (via Seattle). There are others (Sydney, Manchester, Portland, ...; I'm not aiming for a complete list here). For trains, once a week, there is a direct train which stops first at Frankfurt (am Main) and then at Frankfurt (an der Oder).

But are there, or have there ever been, any direct scheduled flights between two cities of the same name?

To get from Alexandria AEX (LA, USA) to Alexandria HBE (Egypt) it takes 3 to 4 stops, so sadly that's out. Most ancient Alexandrias lack airports.

Glasgow GLA (Scotland) to Glasgow GCW (MT) has 3 stops. As is Trinidad (TTD) to Trinidad-Tobago, a country, using Port of Spain POS as a mark. Or Armenia AXM in Colombia to Yereven EVN in Armenia.

Kingston KIN (Jamaica) to Kingston YGK (ON, Canada) is 1 or 2 stops, we get better! Same for London LON (England) to London YXU (ON), 1 stop and occasional 2 stops, as is San Jose SJC (CA) to San Jose SJO (Costa Rica), as is from San Jose SJO to San Jose SJD (Mexico), or Santiago SCL (Chile) to Santiago STI (Dominican Republic), or Manchester NHT (NH) to Manchester MAN (England) or Rochester ROC (NY) to Rochester RST (MN). Or Manhattan MHK (KS) to Manhattan, New York NYC (NY), landing in EWR or JFK.

But to get from San Jose SJC (CA) to San Jose SJD (Mexico) or Columbus CMH to Columbus CSG (GA), it's always 1 stop, Again, a little better on the track. Same for Washington (DC) WAS to Washington (State) using SEA. Or Saint John YSJ (Canada) to St.John's YYT (Canada). And another case of former-Alexandrias: Kandahar KDH to Herat HEA (both Afganistan) via Kabul.

Kaliningrad (since 1996: Korolyov) to Kaliningrad KGD (formerly: Königsberg) in Kaliningrad Oblast would have been a nonstop flight... from Moscow SVO.

Pfäffikon SZ and Pfäffikon ZH are two suburbs of Zürich, about 10km from each other. SZ (Schwyz) and ZH (Zürich) refer the the cantons these villages are in. Both are on the Zürich suburban train network, and you can travel between them every half hour. At one time there were even direct trains...

Since your rules do not mention that flights have to be regular nor commercial, some "test flights" may satisfy yor criteria.

The ticket below was for a direct flight from Toulouse (TLS) to the very same Toulouse (TLS) airport, approx. 10 hours long just to reach the place you were departing from. 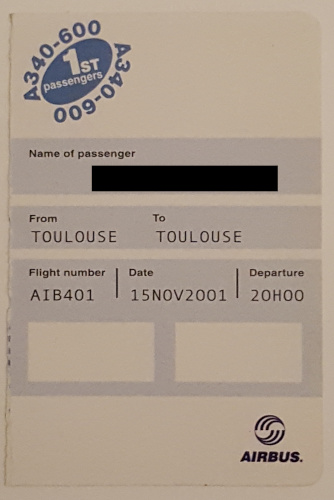 This was the first Airbus A340 flight with passengers, aimed at testing the cabin and its related facilities (intense use of toilets, heating and serving hundreds of meals, etc.). Except that you could not buy the ticket from an airline, it was just like a normal, fully booked, evening flight. You would pop up at the airport 1-2 hrs before, go through security, wait in the terminal and board the plane from a gate. During the flight, the plane just circled above the Pyrénées mountains to make time pass and burn its fuel. It then returned to its original airport in the morning (no jetlag!).

First I'll propose one historic but concrete example there used to be a helicopter shuttle between London (LHR) and London (LGW) (same city, different airports). I'm sure there were similar services in other countries.

Now for my attempts to find something current. I don't believe there is anything, but can't claim to have conclusive proof.

From Wikipedia's list of international airports I extracted all the airport names (pasted into a text editor, tidied up, piped through sort. Of course at this point I may already be omitting some domestic airports like Portland(PWM)-Portland(PDX) as mentioned in the comments. The full list is too long to include here but is on Dropbox.

Then I used a Python script to pare this down to duplicate city names, generate URLs for Google flights, and load those URLS (rate-limited) in the default browser:

None of these pairs show anything on FlightRadar24's search of direct flights, but that only searches current flights. Google similarly doesn't find anything direct. The best is Panama City (Panama, PTY) to Panama City (Florida, ECP) with a change in Houston. Google should hopefully find everything direct, but it certainly misses some indirect routes: flightconnections.com finds Valencia (Spain, VLC) to Valencia (Venezuela, VLN) with 2 changes (several routes) but Google doesn't.

I won't claim this is conclusive for a couple of reasons:

There is now a direct train 041/042 from [Veliky] Novgorod to [Nizhny] Novgorod and back.

And nobody is very happy about it since it messed up former city residents' arrival time to Moscow.

Not the answer you're looking for? Browse other questions tagged air-travel where-on-earth factoids or ask your own question.