Easiest way to travel regularly from Essex to Cornwall

I'm looking for the quickest/cheapest way to travel from Braintree, Essex to Mullion, Cornwall every 3 weeks or so.

My girlfriend has a new job and will be staying down there so I will be visiting her roughly every 3 weeks.

I have a car and can drive so that is a possibility but it is 350 miles each way by car and the fuel cost is quite a bit. The journey would also take over 6 hours each way.

I did look at flights also but the nearest airport seems to be Newquay and the only flight i could take seem to come from Heathrow Airport but none via Stansted Airport which is my closest. If i flew i would most likely hire a car at the other end for the duration of the trip.

Is there an easier way to make the journey regularly via public transport ?

Well first of its worth mentioning there is unlikely to be any way to do this fast, it's 350 miles which is a long way. Full timetables for all routes are at: https://www.firstgroup.com/cornwall/plan-journey/timetables/?operator=6&page=1&redirect=no

Also remember that on the trains you can get some work done, watch a film, sleep ect. Whereas while your driving your time is more likely to be wasted. There's also the associated carbon emissions with driving you'd hopefully like to consider.

Mullion is going to be the restriction so let's look there first. There seem to be 3 main routes - the L1 which runs most hours throughout the day and provides a link to Redruth railway station. The last bus is 1920 weekdays, 1700 Saturdays and 1630 Sundays. GWR run an hourly train directly to Redruth from Paddington which wouldn't require any changes. So you'd need to get from Braintree to Paddington, most likely by the Greater Anglia service from Braintree station to Liverpool Street and then the tube. You'd be looking at around 8 hours total travel.

A related option which would be great if you want to go after work would be to get the Night Rivera sleeper service, also operates by GWR: https://www.gwr.com/plan-journey/journey-information/on-board/night-riviera-sleeper This also runs direct from Paddington to Redruth but runs overnight, leaving Paddington at 2345 (although you can board from 2230), arriving into Redruth at 0717 on weekdays and 0815 on Monday (leaving Sunday night). There is no service over Saturday night. It gives you plenty of time to arrive and eat Breakfast in Redruth and getting the L1 bus at 0800 or 0900. The train is like a hotel in wheels, with proper lie flat beds and a lounge carriage. While this is a great option heading outwards it isn't as good coming back - you'd have around 4 hours in Redruth between the last L1 arriving and it departing. You also have to get up earlier, it arrives into Paddington at 0507, although you can stay on the train till 0645. Although it might be worthwhile if you can head straight to work.

The final to bus routes into Mullion are the 251 and 230. These are once a day peak time only buses running to Penzance and Thuro respectively. The only run on college days only and I'd guess mostly carry college students, which you may not like, although are open to the public. They also don't stop quite at the stations, the 251 would require around a 0.5 mile walk from the nearest stop to the railway station. The 230 is worse, it's actually optimistic to say it goes to Thurso considering how far the college is, the nearest station the route passes is at Perranwell. But your left with around a mile to walk. This is only a branch line station so you'd need to get the train to Thurso. Or changes buses, either at the same point or at the college.

Really the 230 and 251 don't create any new opportunities and are likely less easy. Although they do provide useful additional options, leaving about an hour before the first L1.

If your also one for trivia, keep going south on the L1 and you'll reach Great Britain's most southerly bus stop! https://busandtrainuser.com/2019/08/08/britains-most-southerly-bus-stop/ The blog also makes a good point that through tickets valid on the train and bus can be purchased by getting a train ticket to Helston bus. They seem to be available to me! 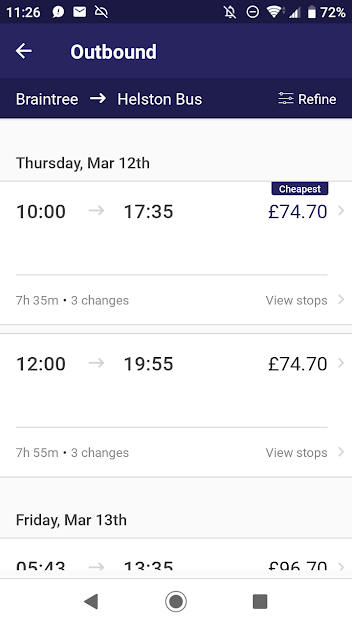 Although weather they are valid along the whole route or only as far as Helston I have no idea.

Have you considered the sleeper trains?

From Braintree you can catch a train (hourly outside of peak hours) straight to London Liverpool Street. The 21:00 is the official connecting service. A trip on the Circle or Hammersmith & City Line later brings you to Paddington. From Paddington every night except Saturday night runs the Night Riviera sleeper train to Cornwall. It leaves at 23:45 and arrives into Redruth at 07:17. You can book a seat (for no extra cost compared to a normal train) or a berth (bed) in a private compartment for an extra fee. The train arrives at Redruth at 07:17. There's a 07:55 L1 bus to Mullion arriving 09:03-09:15 (depending precisely where in Mullion you want), or you can get a taxi which would presumably be faster.

In the opposite direction a taxi would probably be preferable unless you fancy waiting around Redruth. The last bus leaves about 17:50-18:00 and arrives at 19:11. The sleeper train departs Redruth at 22:16 and arrives into Paddington at 05:04, though you can usually stay on the train for longer. If you decide to get off the train immediately, the official connection is onto the 06:12 from Liverpool Street which arrives into Braintree at 07:19. Probably early enough to start work!

As for general sleeper tips. There's a lounge car where you can have food and drink, but the last time I travelled on this sleeper (admittedly a long time ago, when it was still branded First Great Western!) the selection in the lounge car was abysmal, so I'd probably only rely on it for a late-night drink/snack rather than as a dinner replacement (however there should be enough time to grab some food at Paddington). If your sleep is easily disturbed I would highly recommend aiming for a berth in the middle of a coach, as this will be further away from the wheels which make noise every time you go over points. As a person who doesn't sleep well myself, I have no trouble sleeping on the sleeper train if I aim for the centre.

From 29 March 2020 FlyBe has direct flights from Southend to Newquay on Thursday, Friday, Sunday and Monday.

You have several options for this journey. I can't say which is best for your specific case. I'm working on the assumption that you're leaving after work on a Friday and you need to be back for work on Monday morning.

It's a long drive, which means it will take most of a day, especially once you include breaks. If you're going down for a weekend, then you'll spend most of the Saturday travelling down and most of the Sunday travelling back, or possibly you can drive down on the Friday night and at least get all of Saturday together, though you'll arrive very late on Friday night (ie into Saturday morning). Also, you're likely to have to deal with very bad traffic getting around London (presumably on the M25), so your arrival time will be both unpredictable and liable to be delayed enough that you get too tired to complete the drive and need to stop off on the way (which means an expensive last-minute hotel/motel booking). Alternatively, you could have accommodation pre-booked (which should be cheaper) at a suitable spot to break the journey so you can arrive in Mullion earlier on the Saturday.

The only airport even faintly nearby is Newquay. Direct flights are only from Heathrow, which is not especially easy to get to from Braintree (you either have to drive all the way around London, or else take two trains and a tube). If you had more time, you might be able to use connecting flights and leave from Southend or Stratford (e.g. via Dublin), but that's not realistic for a weekend trip.

There is no reasonable way of getting from Newquay to Mullion other than by car - either hiring one, getting a taxi, or arranging for someone to give you a lift.

The closest station to Mullion is Redruth - and there's a bus (L1) from there to Mullion. But the bus doesn't run late at night, so you'd need to arrange transport from Redruth (book a taxi, perhaps). If you can catch the 5pm train from Braintree, then you can make the 19:04 from Paddington to Plymouth, and a change in Plymouth will get to you Redruth for 00:05 (five past midnight). If you can make it to Braintree station for 5pm, that seems like the only realistic way to get to Mullion the same night. Coming back, the last daytime train on a Sunday with connections to get you to Braintree would be the 16:44 from Redruth, and there's a bus leaving at 1453 from Mullion that will get you to Redruth for 1611, a reasonable connection.

There is a sleeper train between Paddington and Cornwall, which leaves Paddington at 2345 on Friday evening and arrives Redruth 0717. The first bus on a Saturday is at 0900 (arriving Mullion at 1013). Returning on the Sunday, the sleeper leaves Redruth at 2146 and reaches Paddington at 0504 on Monday morning, which should leave enough time to cross London and get to Braintree in time for work. The problem is that the last bus from Mullion to Redruth is the 1653, which would leave you waiting at Redruth station for nearly four hours (1806-2146), so you'd probably want to arrange alternative transport in the evening so you can spend more of Sunday with your girlfriend.

All of these options are likely to be expensive - the daytime train is £130.60 (super off-peak return, which should cover any weekend train - you can get advance fares, but that ties you to a specific train); the sleeper is £55 extra each way if you want a bed (you can sleep in a seat if you want, but I wouldn't recommend that). Flights are about £135 return.

Not the answer you're looking for? Browse other questions tagged uk air-travel public-transport or ask your own question.

16
What is the cheapest way to cross the English Channel from France to the UK on foot, single ticket?
4
Is a Budapest "transfer ticket" valid for Bus then Metro then Tram?
2
Deported form US twice, visiting England
3
Airline (Air Caraibes) refuses to compensate for baggage delay - what are my options?
3
Connecting flight got cancelled after first leg of journey. Am I entitled to a full refund?