I began to draft an answer to this Travel:SE question about the OP's need for a transit visa. The facts weren't complicated: Uzbeki national, going to school in China, with a transit in Seoul (ICN) on the way home. This looked like an easy referral to Timatic.

This data returned this Timatic report. Because my question here is an interpretation issue, I think it shouldn't be indexed for the underlying site; here's a screenshot: 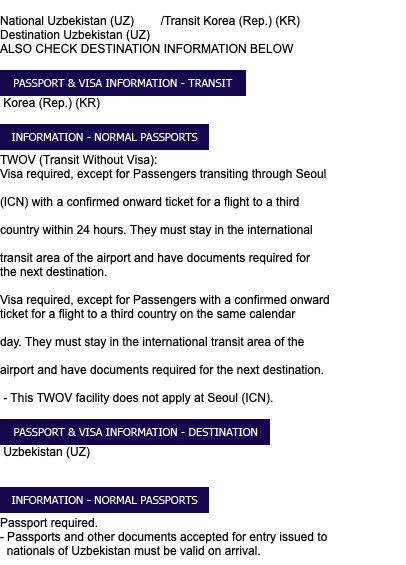 The info at the top under "Normal Passports" says TWOV is OK for this passport holder transiting through ICN with a confirmed ticket for a flight leaving for a third country within 24 hours. We've all seen these sorts of conditions before.

Later down the page, however, it says "This TWOV facility does not apply at Seoul (ICN)."

I've not seen the exception-at-the-bottom conflict with the (satisfied) conditions at the top under TWOV.

How should this be interpreted?

EDIT: The same issue arises when querying Timatic about this itinerary: Philipines citizen traveling Manila > ICN > Brazil. This suggests the issue may be localized to Timatic's memorized response when ICN is presented as a Transit point.

At Seoul (ICN) you can transit for up to 24 hours, because the transit area remains open overnight. Other airports close their transit areas at night, so you can only transit within the same day there.

Not the answer you're looking for? Browse other questions tagged timatic or ask your own question.

27
Ordinary Traveller: How to use Timatic?
8
Does Timatic information grant you the right to get on a flight?
14
Is Timatic always up to date?
11
How is Timatic pronounced?
11
What does Timatic mean by saying: Only one transit stop-over in Saudi Arabia is permitted
11
How to submit a correction to Timatic?
4
Can Timatic data on some sources be outdated or incorrect?