Is it necessary to pay extra for navigation when renting a car in the US?

This is a relatively straightforward question. I'm scheduled to visit the US in a couple of weeks. It's been around 15 years since I've been there, and I don't remember much as my parents had taken care of most of the work back then.

I want to rent a car in Las Vegas so that I can drive to the Grand Canyon and back. I noticed that they have an option to pay extra to add a GPS system. Is this necessary? I suppose the reason I'm asking is because (at least in my home country of Korea) everyone uses their phones and navigation apps (e.g. Google Maps, Kakao Maps, T-Map, etc.)

Are there any details that I'm unaware of that may cause adding on the navigation to be more beneficial? Thanks in advance.

If you have a modern phone, you don't need to rent the GPS with the car. Just install a navigation app that supports offline maps (this includes Google Maps these days but there are others), and download the proper maps in advance. I usually have a second app as backup.

The only minor inconvenience is that you need a mount (I use a cheap generic one bought at a dollar store) and have the charger cable in the car to keep the phone connected. Any car you rent (with possibly the exception of a very cheap compact) will have a usb port to plug it in.

As mentioned in the comments, it is important to have offline maps anyway, since it is unlikely to have cell coverage in the area of the Grand Canyon. As an example, here is the coverage by AT&T (blue is LTE, green is other AT&T, yellow is roaming): 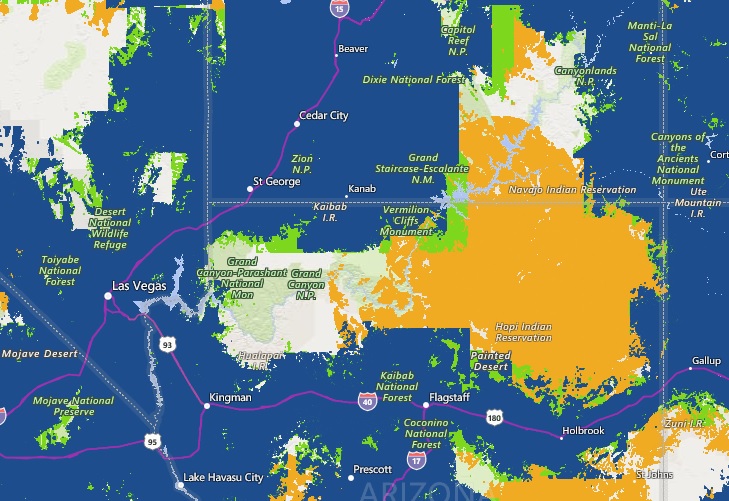 I'm going to add a 3rd option. Buy your own stand-alone GPS unit from a big box store in the US. Depending on how long your trip is, what data plan you have for your phone, or how much the GPS rental is from the car company this may be a cheaper option.

Additional benefits of this option is that the device will come with mounting hardware, and that when your trip is over you can sell the device and re-coup some/most of your costs.

The downside to this is that the maps in the device may not be the most up to date and that you'd be looking many gigabytes of downloads for the latest maps. But in general for a trip around Nevada to tourist destinations you will most likely not need the very latest maps.

If you don't have mobile internet access while in the US you have to resort to offline maps or to the car GPS, because you can't download maps on your phone as you navigate.

I've rented a car in the US a couple of times and I always added a GPS, because the roaming costs for mobile internet connection are very high, and I didn't want to buy a US SIM card for a short trip. At home, and in the EU where there are no roaming costs, I use Google maps to navigate.

Because Korea is extremely dense and that makes it easy to essentially 100% cover with cell phone service. The Grand Canyon has a vast wilderness, almost comparable to Siberia.

Whether a car sat-nav makes sense depends on the unit

A traditional Sat-Nav device (you mis-call them "GPS") has a huge amount of memory to store pre-programmed maps of your region. It also has a GPS receiver so it knows its coordinates.

However, obviously, the trend is to go to "cellular data connected" types, because they have the latest maps, do smarter routings based on collected data, and are able to adapt to live and past-pattern traffic conditions. These will be useless in many parts of the Canyon.

Increasingly, the car rental agencies are likely to hand you a loose "device" that is basically an Android tablet, and rent that to you for some outlandish price. Don't count on it being mounted, integrated, or audible in driving conditions.

It also depends on the language.

Because the rental-car company supplied unit will be English language, almost certainly. If only the driver speaks English well, this is a bad division of labor. The rental company's choice of device will be unfamiliar and awkward. To be clear, the person driving is not the person who should be dealing with the nav. Messing with any smart device while driving is always dangerous; but an unfamiliar or balky one is much more dangerous because of how the brain responds to unexpected behavior. Brains do not multi-task; they rapidly task-switch (badly). Unexpected behavior from a balky device makes the brain not switch back at the expected time, extending the head-down time and making you crash.

If there are 2 adults in the car, the driver should not be navigating or interacting with electronic equipment. The other person should. Which means the nav aids need to be in that person's language.

Which brings us to the ideal division of labor on a long road trip.

The best division of labor on a road trip is 2 people: One person to drive and the other to navigate. The driver treats the navigator's word as absolutely correct. If the driver strongly feels otherwise, the driver pulls over safely to the side of the road and they look at the maps together and resolve it. *The driver does not badger or argue with the navigator, or make the navigator afraid to speak freely. The navigator does not give too-late or shaky/uncertain instructions; better to give a wrong instruction firmly, then at an appropriate time, a second instruction to correct the course**. Once you get the rhythm of it, it works very well.

Obviously, that creates a language dependency.

A sat-nav attempts to automate the navigator's job. A human navigator is worlds better. The human might use the sat-nav as a tool, but would be better off using tools the navigator is already familiar with. I certainly would be reluctant to reserve in advance a Sat-nav the navigator has not had time to play with to see if it's a good fit.

If you are the English speaking driver, I'd rather you converse with the navigator in Korean and have the navigator use a familiar tool in Korean. Google Maps is available on iOS and Android obviously, and allows pre-loading of offline maps. It keeps them in memory only for 30 days or so, so don't load them too soon or it'll delete them.

Paper maps are your friend

Really. There is no substitute for paper maps. They are large, and present both the entire "big picture" and also the finer details.

However again, they need to be in the navigator's language. Sourcing Korean language maps of the US Grand Canyon ... in the US ... may be a challenge; get them at home.

The "Rescue Me" button

I mention this because this happens at least a couple times a year, usually in the winter. People make wrong turns (often due to sat-nav telling them to), the car has a problem, and they die out there. Every case could have been trivially solved with one piece of tech: The 406 MHz ELT. This uses the military-grade, built-for-purpose distress signal system also used by jetliners and cruise ships. Due to the high cost of the infrastructure (many satellites), there is one world system with all the major powers onboard. A handheld beacon costs about $400 (once, no annual fee) and they can also be rented. It has exactly one job. Break seal, push button, forget it, focus on survival, and 2-12 hours later, help appears. It doesn't do anything else. It works anywhere but the steepest canyons (and obviously not caves), but this time of year you should be staying out of slot canyons anyway. If you have a mind to do anything slightly adventurous, or just if you're bad at navigation, think about getting one of these.

"Continue straight here. Do not get on the freeway."

"At the next opportunity, do a U-turn. We do need the freeway, after all. I wasn't sure, and I called straight because it would be easier to recover."

"Get on the freeway northbound. This ramp here, follow the brown truck".

It mostly depends on what you would otherwise use for navigation. Also, consider that you are planning to travel to an area with a low population density (high risk of getting lost, as well as patchy cell coverage, see Death by GPS).

Regarding your “usual” navigation options, consider:

If you intend to rely on your cell, be sure to carry a car charger and cable for it. Not all rental cars may have a USB port, but a 12V plug is pretty much standard.

If all you’re doing is going to the Grand Canyon and if you are comfortable getting out of the city without a GPS then the drive is very straightforward. There will be phone coverage within Las Vegas itself.

Worth noting cellphones in the US are very expensive compared to other countries.

We paid extra in the US recently and they gave us an android device that took us around in circles trying to get out of Los Vegas. Ended up using Google maps and forgot about the supplied one.

Won't be bothering with paying extra for GPS next time.

Note: we had T mobile SIM cards for mobile data and I'd also setup offline maps.

Amazingly, though even cheap cars in the UK come with built-in satnav, I've never had a rental car in North America -- even upmarket models -- come with a built-in satnav. And although I use a Samsung Galaxy phone and find its navigation useful when on foot in strange countries, even that size of screen isn't great while you're driving. When I travel to North America I take a stand-alone satnav (with built-in American mapping) with me -- that way I get a good satnav for less than the cost of renting one for a couple of weeks -- and I have it when I need it most, driving away from the car-hire office!

Buy a $5 map at a gas station. You will easily be able to navigate yourself to and from the Grand Canyon.

Not the answer you're looking for? Browse other questions tagged usa car-rentals gps-navigation or ask your own question.