How to visit Jewel in Changi on layover without paying extra?

If I have a 5+hour layover at Changi Airport, what is the procedure to visit Jewel and the rain vortex without having to pay departure tax?

Both incoming and outgoing flights are with Singapore Airlines.

If that's not possible, what's the most I can see of it e.g. from a train?

Whether you pay the departure tax does not depend on whether you leave the airport. This official document defines:

Transfer passengers: Passengers who, as evidenced by a single passenger ticket, is scheduled to depart from Singapore within 24 hours of his scheduled time of arrival, and on an aircraft with a different flight number, for a destination in another country other than the country from which he embarked on the aircraft by which he arrived in Singapore.

There are programs to give shopping credits within the airport (not at Jewel) to transiting passengers. If your layover is more than 5.5 hours, and happens to line up with specific tour times, you can have a free tour of Jewel - the kiosks are before immigration. You can pre-arrange through Singapore Air or take your chances on the day. Times don't line up? Maybe a bus to the Merlion would work for you, details on the same page.

If their tour doesn't work for you, you can just walk over to it and walk around then walk back again. That's what I did when leaving recently: my hosts took me to the airport, I checked in and dropped off my luggage, then we went over to Jewel for an hour or so. While I was there, I saw a tram going right past the rain vortex repeatedly. The maps aren't super clear, but it appears to be the T3 to T2 shuttle. I don't know if you can get on that without clearing immigration. 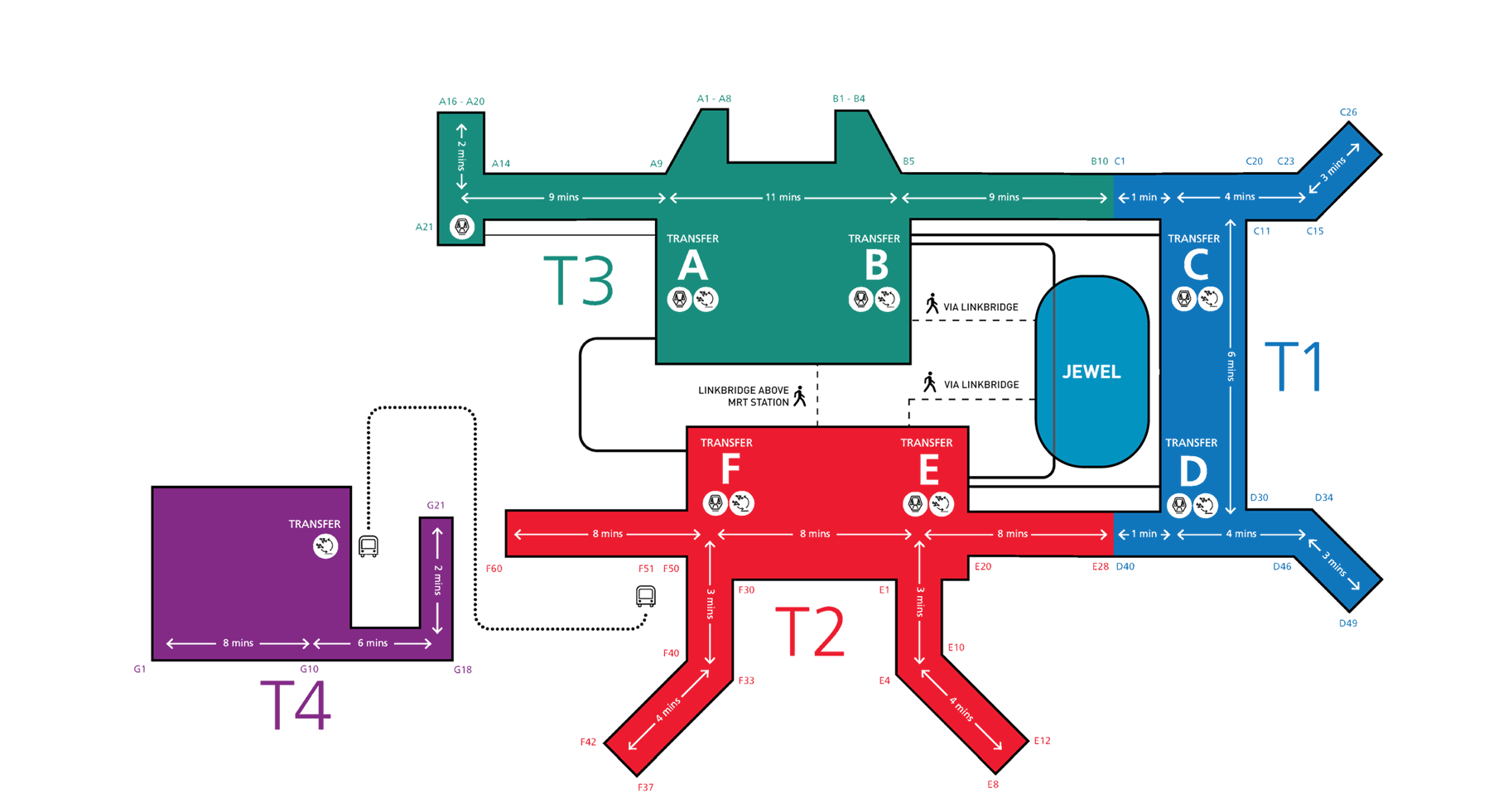 share|improve this answer
answered Jan 12 at 15:53

If just seeing the artificial waterfall is what you’re after, you can do that at no extra cost from inside the transit area without ever entering Singapore. The transit shuttle from B to E (see Kate’s map) passes through the Jewel at a nice height to see the waterfall and the surrounding open space; see these pictures I took from inside that transit shuttle in April 2019: 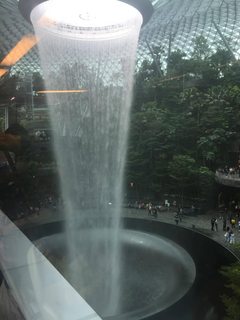 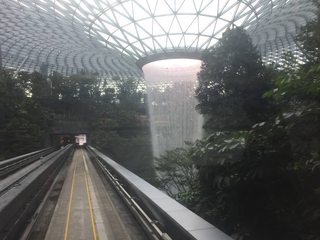 Left: View of the waterfall and interior of Jewel. Right: the tracks of the automated people mover passing through Jewel. Click on the pictures for high resolution.

My memory is not entirely fresh, it could have been that the shuttles briefly waited in front of the waterfall to provide best views but even if they didn’t they don’t travel that quickly.

Note that while there is only one arrival platform in each of the terminal wings, the bit through Jewel serves as a passing area to double the capacity of the shuttles so if you’re in the unlucky direction there’ll be another path of the shuttle between you and the water. Fret not, the shuttle is free and goes back and forth all day so just board again.

Also note that if my memory serves me correctly Kate’s map is not accurate; you want to be on the inner circle to get a view of the waterfall (i.e. the shuttle passes through the part of Jewel closer to terminal 1).

I will also point out although it is at best tangential to the other points in this answer that on the other leg of my flight with Singapore Airlines that April (Asia–SIN–Europe return) I had an 18-hour layover, entered Singapore visa-free and went sightseeing in the city without having to pay any additional fee to get back airside. At no point in that transit did I pass any booth that had anything about a departure tax mentioned so reading about it here is the first time I saw it.

share|improve this answer
answered Jan 14 at 10:11

You don't have to pay anything extra. If you are eligible for visa on arrival, or VFTF, then you can clear immigration and visit. It is right next to Terminal 1. Even if you have around 2 hour layover, you can comfortably visit.

There is an official tour also which can be availed free of charge. It will take longer and your layover needs to be co-inside with the tour timings. It also includes free admissions to otherwise chargeable areas.

share|improve this answer
answered Jan 13 at 5:49

Not the answer you're looking for? Browse other questions tagged singapore or ask your own question.

9
How often can you visit on a multiple-entry pass to Singapore?
3
How much time to give myself to change airlines on Changi Airport with and without baggage?
14
Is it feasible to visit Malaysia on an 18 hour overnight layover in Singapore?
4
Long overlay in Singapore (Changi Airport)- How to get a visa to travel outside?
7
How to use buggy service in Changi airport (Singapore)?
3
Connection in Singapore between Jetstar Asia and Finnair. Can I remain in the international transit area?
4
How to get medical insurance for a Singapore layover?
4
Can I visit the Jewel mall after checking in my luggage at Changi?