What's the longest distance that can be traveled by only using free transportation?

As an example, public transportation within the Melbourne city center is free, so one could take a free tram between Spring St and Docklands Dr: 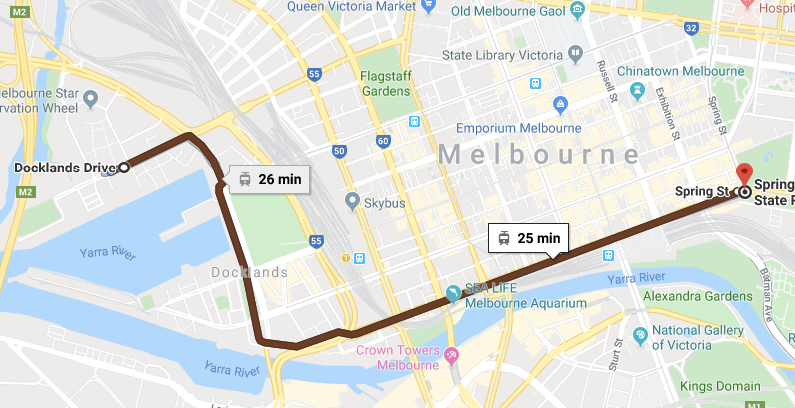 The total distance (as the crow flies) between these two stops is 3.19 kilometers. Are there locations around the world where one could get farther by only utilizing free transportation?

The exact limitations are:

Free every weekend, no restrictions on residency, age etc.

If you really want, you could put together a much longer, convoluted trip visiting all four corners of Wales. Beautiful hills and mountains all the way.

People are apparently permitted to hop a free ride in an ore hopper on the iron-ore train between Noadhibou and Zouerate, Mauritania. Those able to pay $4 (at least in 2007) can upgrade to a seat in an actual passenger cabin.

GScott also mentioned this route in an answer to a prior question on where train "surfing" is legal.

From March 2020 all public transit in Luxembourg will be free. Luxembourg is about 60km long and well served with rail lines and bus routes, so presumably the longest trip will be about 60km.

87 km (54 miles) from Trondheim, Norway to border shopping across the Swedish border in Storlien

The route of 108 km along the road is the longest I found searching for gratisbuss (free bus) in Swedish. It is a service offered free of charge, sponsored by the supermarket Coop Extra Storlien just across the Swedish border. It is offered two times every day, and is run by the Norwegian bus company Thorleifs bussreiser who market it as a "Free shopping trip to Sweden": Gratis handletur til Sverige. In connection to Coop Extra there is also a Systembolaget, the Swedish state owned liquor store.

Border shopping is common in Scandinavia where national regulations and currency differences make it beneficial to cross the border for cheaper shopping. Typically food and especially alcohol gets cheaper every border crossing going from Norway -> Sweden -> Denmark -> Germany.

At the time of writing, all busses from Intercity Transit, the transit authority for the Olympia, Washington area are free. The longest route I can find is from Israel at Littlerock Rd to Tacoma Dome Station with bus routes 12 and 612. This is a total distance of 47.59 kilometres or 29.57 miles.

Unfortunately, further connections to Seattle and SeaTac airport are not free, so this appears to be the longest route in this area.

The Staten Island Ferry in New York City is famous for being the only NYC service which is cheaper than it was in the 19th century (or at least they told me so), since it's free as of 1997. It covers a distance of 5.2 miles.

Many US National Parks have established free shuttle services to alleviate automobile congestion. Most such systems are disqualified by the "access point must be free of charge" clause in the question; but there are a couple of systems I could find that have free shuttles running outside of their respective parks.

Island Transit in Washington state, USA does not charge fares. This route from the March's Point Park and Ride to the Clinton Ferry Terminal covers about 54 miles by road, somewhat less as the crow flies because Whidbey Island is rather windy.

170 km free trips from St. Petersburg to Finland (and back)

As advertised on classifieds service and elsewhere.

Those trips are genuinely free and available regularly for anyone who has finnish visa.

The rationale is that they are going to (ab)use your free per-person customs limit. I.e. import some goods free of customs charge. But it's legal and free for you as a traveller.

I posted the answer below before I saw the condition: It must be available free of charge to any person regardless of citizenship, residency, age, occupation, gender or any other characteristic. Sorry. I still like the idea though. :)

874 miles in the UK, from Land's End (south-west corner of England) to John o'Groats (northern tip of Scotland) ... but only if you're over 60

This is the furthest that can be travelled in mainland Britain, and therefore is famous for long-distance challenges. The Wikipedia page for the journey includes reference to the journey time by public transport, although the page assumes that the train can be taken for part of the journey. Bus services run to both Land's End and John o'Groats though, and there are no "islands" of bus services in the UK which do not interconnect to other bus services, so it certainly is possible to travel that distance solely by bus.

That matters, because people over 60 in the UK can travel for free on buses. In England and Wales there is the Older person's bus pass. Scotland has its own equivalent scheme. The traveller would need both of these passes to carry out their journey, but both passes are free.

956 miles in the UK, from Land's End (south-west corner of England) to Lerwick (Shetland Isles) ... but only if you're over 60 AND you live in Shetland, Orkney or the Western Isles of Scotland

The free travel scheme for Scotland has a further provision. Quoting from the website:

The furthest ferry journey available here is to Lerwick in Shetland. Shetland does not have a bus service on the island, so your public transport adventure ends here.

https://en.wikipedia.org/wiki/Kootenay_Lake_Ferry (9 km, claims to be "longest free scenic ferry in the world"):

The Kootenay Lake Ferry is a ferry across the Kootenay Lake in British Columbia, Canada. It operates between Balfour, on the west side of the lake, and Kootenay Bay, on the east side. It is the longest free scenic ferry in the world.

Also https://en.wikipedia.org/wiki/Free_public_transport has some relevant pointers.

Another cool one, as it crosses an international border:

Since September 1st 2018 all buses in Dunkirk, France, run by DK'bus are free. This includes line 20, which has a terminus at Gare d'Adinkerque in Belgium (aka. De Panne Station).

The longest journey I could find on this network is 46.665km long, from "Gare d'Adinkerque" to "Grand Fort-Philippe Flaque aux Espagnols". It takes just over 2 hours, and has 2 transfers.

On one end, at Adinkerque, the network connects with the (non-free) Belgian Coast Tram, which at 67km in length, is considered the longest tram line in the world. The bus stop is located at the De Panne Railway Station which has regular trains.

On the other end, at Grand Fort-Philippe, the network is close to Calais, whose buses also became free on the 21st of December 2019. Unfortunately the two networks don't seem to be connected, so it is not possible to go from Dunkirk to Calais for free using public transport.

Not exactly public transportation, but if you do a free Viking Line membership then you can take a free ferry from Kapellskär (north of Stockholm) to Mariehamn, Åland Islands (Finland) and back, a distance of around 80km each direction.

Seems like it now costs 20 SEK (2 Euro), so not free anymore

During the Tobin Bridge/Chelsea Curves Rehabilitation Project, which will last until late 2020, all inbound buses on the Silver Line 3 (SL3) are free. The Silver Line bus lets off in South Station, which has free transfers to the Red Line of the subway. The most distant stop on the subway is Braintree, resulting in 13.16 miles of travel as the crow flies.

I can't believe this hasn't been mentioned yet, but I've traveled across Europe completely free by hitchhiking. Seems to meet all the limitations of the question. In my experience, if you stick to the main routes and you acquaint yourself with the hitchhiking customs of the country you're in (see hitchwiki.org) this can be quite reliable.

Many gambling casinos offer free shuttle buses from nearby cities.

I'm not going to try to search for the longest such trip, but I know that at one time, the trip from Philadelphia, PA to Atlantic City, NJ was either free or "effectively free" (fare was offset by casino credits). That's a trip of about 60 miles (100 km).

Hm .. Halle (Germany, Saxony-Anhalt) comes to my mind - you can start in the north - e.g. Line 3 ffom Trotha, travel right through Halle's city center - end end up in Bad Duerrenberg 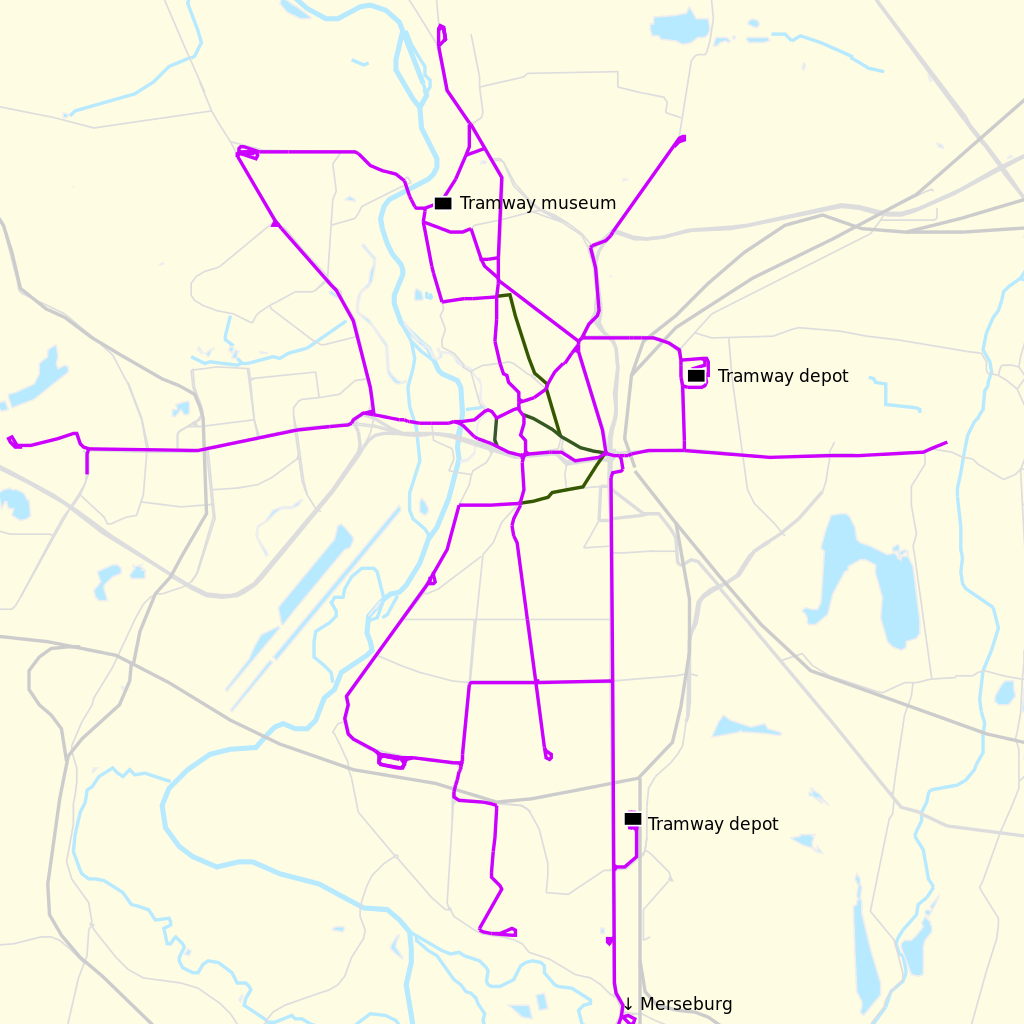 You just have to switch in Halle's center to Line 5.

The whole length is about 50km - I'm not certain about actual distance as the crow flies .. But the head mayor of Halle has announced to make public transit cost free - only when actually checking it is not free yet .. and I cant find any hint about when they will enable cost free

The most magical, and genuinely free, option would be the 5.7 miles from the gates of Magic Kingdom to Disney's All-Star Movies Resort.

This seems to be the most free option since it's not publicly funded or subsidized.*

*RCID is 'publicly' funded exclusively by the Walt Disney Company.

Since you include 'Hacks', would rafting the length of a river be considered for this? Rivers run regularly, across large distances, and many world wide do not have restrictions on if you can be on them. I do not know the longest which is unregulated however.

I tried to have a more creative answer on this one.

on planet (spaceship) earth, a free ride is available across the solar system/galaxy/universe, distance traveled depends on when you board (are born) and when you get off (when you die).

Summit County, CO has a nice, free bus system (https://summitcountyco.gov/586/Transit-Summit-Stage) that runs between the towns and various ski resorts in the area. With just a quick check, I think Arapahoe Basin to Copper Mountain is the longest distance at just under 29km as the crow flies.

These two Melbourne suburbs have a "As the Cocky Flies" distance of 86.8km between them (Cocky Flies, Geoscience Australia tool)

The exact conditions are described in the Victorian Fares and Ticketing Manual (warning - heavy reading), but are also summarised in the Early Bird train travel section of Metropolitan Fares. My summary follows:

All buses in Park city Utah are free. One route goes as far as Kimball Junction and it's roughly 8 miles away.

As a NSW Pensioner I get two free trips on trainlink NSW. So I can take a train and bus from the Queensland Border to the Victorian Border for free. To be truthful I think this is the situation in all Australian states, a person can travel from state border to border. So for a Western Australian they can go from the bottom of WA to the Top of WA which would possibly make it Australia’s longest FREE Journey.

According to former physicist David Sims:

I think this meets all your criteria except for boarding and exiting, but you might be able to hack those depending on your spiritual beliefs.

French Railways company idTGV used to have a scheme allowing you to travel for free if in exchange you run some entertainment aboard the train during 2/3 of the time. Around 80% of users offered music, but other options included magic tricks or osteopathy. The scheme was called "voyageur acteur".

Not the answer you're looking for? Browse other questions tagged budget where-on-earth or ask your own question.

23
Are there any trains where roof riding is legally possible?