What is the location of this 19th century photo of the Andes?

The CNN article "The stories behind 10 of the world's earliest known photographs" includes one entitled, "The Andes, likely Peru or Bolivia (1849)".

It does not specifically identify the location of the photo, and provides only this information other than its title:

"...this image of the Andean Mountains has been attributed to the American photographer Robert H. Vance.

The images were made using the first ever commercial photographic process, known as daguerreotype, in which mercury vapor was applied to a sheet of light-sensitive, silver-plated copper to leave a sharp impression of the scene or subject. ... It's one of the first known pictures of South America."

However the visible landscape has several seemingly distinctive features. In the upper right quadrant is a mountain which appears to have two distinct peaks. And in the foreground seems to be some buildings, stone walls, or ruins. Possibly remnants could still exist today.

Is there any way to identify the location from where the photo was taken and what the distant mountains are? 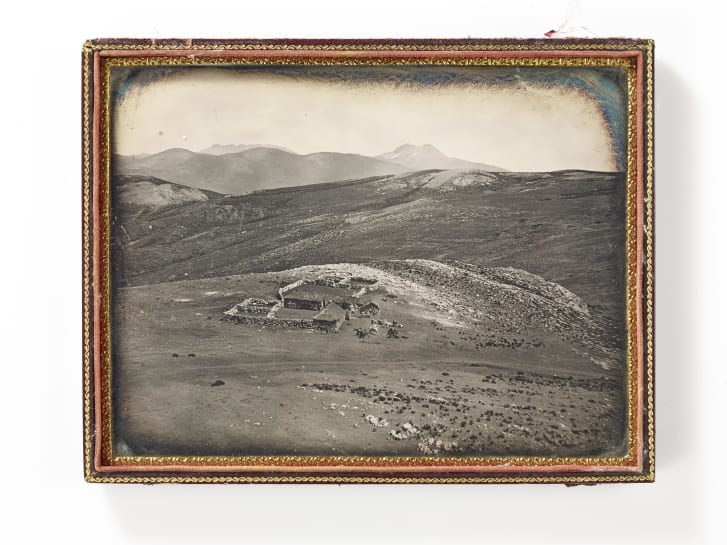 Probably not near those two cities. This is a highland grazing area, I am thinking nearer to the Altiplano. I am hoping someone would recognize the shape of that mountain, which looks a bit like Illimani near La Paz, Bolivia.

Illimani is generally if not always snow capped, plus it has three peaks. In fact the apparent absence of snow on the peaks in Vance's dag is a clue. I'm thinking up into the altiplano from the western coast of SoAm, perhaps somewhere from southern Peru down south into what is now Chile or Bolivia. In the late 1840s, when Vance was in SoAm, the borders were not so clearly defined. Some sources say Vance worked in Peru. If he operated studios in Valparaiso and Santiago, up into the Andes from Santiago would be a place to consider. Proximity bias, yes, but what the heck, it's a start. I've traveled quite bit in the region, and lived two years on the Peruvian altiplano in the 1960s, so I can say the dag's landscape rings a bell, just not a specific, clanging bell. More research required.

From this source, we see:

So the mountains are the Andes Mountains. Don't know how helpful this is for the location of the image, though. You see for yourself!

This indicates he opened galleries in Santiago and Valparaiso, Chile. Perhaps this photograph was taken "near" one of those cities?

Not the answer you're looking for? Browse other questions tagged identify-this peru south-america bolivia or ask your own question.