ICE from Frankfurt to Limburg

I need to reach Limburg a.d. Lahn, Limburg Bf, so when I search for trains online on DBahn, it shows many Limburg options: 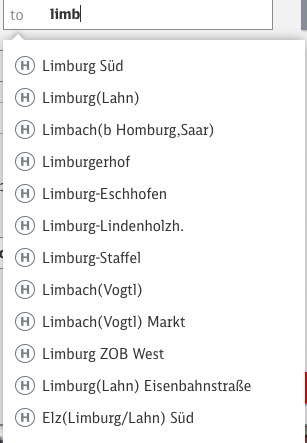 I don't find many ICE trains to reach Limburg Lahn, hence is it okay to take any train that goes to any of the Limburg stations, or are they in different directions?

In general, if a German city name has some qualifier like a river or geographic descriptor (e.g. Limburg a. d. Lahn, Kempten i. Allgäu or Weilheim i. Oberbayern), DB will name the station using the qualifier in brackets (so the above become Limburg(Lahn), Kempten(Allgäu) and Weilheim(Oberbay) – long qualifiers like the last may be shortened). Therefore, when looking for a train to Limburg a. d. Lahn, one would search for a trip to Limburg(Lahn) in DB’s list.

In case that is not enough to tell stations apart or in case the town name includes or used to include bei (near), this is explicitly given as a b within the brackets as for Limbach(b Homburg,Saar) in that drop-down list.

If, however, a city name with a qualifier has multiple stations associated with it, they may or may not all carry the qualifier. So Limburg Süd happens to be in the same Limburg as Limburg(Lahn) but the stations in Kempten are called Kempten(Allgäu)Hbf and Kempten(Allgäu)Ost.

After having a list of stations, DB often includes a list of bus stops (and tram stops or underground stations where applicable). They might not sell you a ticket all the way to whatever small bus stop there is but if they have timetable data (many buses in the countryside are still DB-operated but even within cities they have a surprisingly good access) they can give you a connection. I’m not sure whether Limbach(Vogtland) Markt is already a bus stop but I’m willing to bet Limburg ZOB West is. (ZOB is an abbreviation for zentraler Omnibusbahnhof or central bus station – train stations are practically never named that; if anything, a ZOB was built close to an existing train station.)

If you are looking for the city centre candidate, the top station on the list is usually the one you want but in Limburg’s case you’re looking to go to the central station which is Limburg(Lahn), not Limburg Süd.

In Limburg the ICE doesn't stop at the Limburg (Lahn) (the main station in the city's center). Instead, the ICE only stops at Limburg Süd.

Not the answer you're looking for? Browse other questions tagged germany frankfurt deutsche-bahn or ask your own question.

20
Identification on German trains
15
How can I tell a Deutsche Bahn train has a supplementary charge?
12
Do I need to have a paper copy on an online ticket between Amsterdam and Hanover?
5
Do I need to validate train tickets that were purchased online?
16
How do DB seat numbers work?
6
How to change a Deutsche Bahn flex ticket with mandatory reservation
4
Travelling to Paris by train during a strike in December 2019
5
Does the DB corona-flexibility rule apply to Dutch domestic connections on international journeys?