Traveling to Japan from Southeast Asia in a week, should I be worried about the political situation between Japan and North Korea? [closed]

With the situation heating up and North Korea threatening missile tests over Japan, I am extremely worried about several things:

Are these worries legitimate or am I just overthinking? Help!

Yes, you're overthinking. The name of the game in North Korea is brinksmanship: they push the envelope to extract concessions, but are not stupid enough to commit an actual act of war, like shooting down a passenger airplane.

Also, North Korea does not test anti-aircraft missiles, but ballistic missiles aimed at specific targets on the ground. These fly high and far (>1000 km altitude is not uncommon), way beyond the cruising altitude of passenger airplanes (10 km).

Finally, not only do Japanese aircraft do not enter North Korean airspace, but routes to SE Asia don't fly near the country. Here's Tokyo to Bangkok (map courtesy gcmap.com), which doesn't even cross South Korea (the peninsula at the top right). 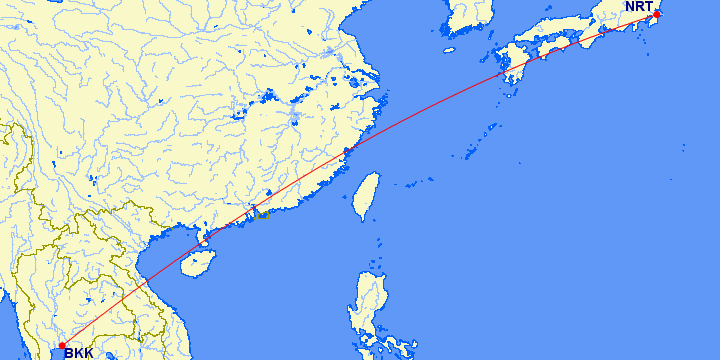 Not the answer you're looking for? Browse other questions tagged japan safety or ask your own question.

17
Travelling between Japan and South Korea
9
Do any of the ferries between Korea and Japan charge per car and not per person in a car?
15
Are there any tours into North Korea that depart from Japan or South Korea?
7
Can I travel on JR Beetle to South Korea and stay for a week, on a 3 month Japan visit
0
Beijing to Boston, layover in Japan. Arrive in Haneda and leave from Narita. How about my check-in luggage?
3
Traveling to the Bahamas now worried about robbery sexual assault
4
When taking the ferry from Shimonoseki, Japan to Busan, Korea, how much will I need in cash-only fees?