Taking a non-foldable bike from Paddington station in London, UK

While MJeffryes has provided a good map to help in the general case, I'd like to answer your specific case.

There isn't really a good route entirely by rail or tube. However, I can spot a few decent-looking routes if you're willing to go for a longish walk or a short-to-medium cycle (I'm not a cyclist myself so don't know precisely how cycle times correlate with walking times!), and even a somewhat fiddly one involving a short walk/cycle!

All of these options can be paid for in their entirety with Oyster or contactless payment cards, or by use of a paper London Travelcard.

From the Hammersmith & City Line platforms at Paddington, catch an Eastbound train (Circle or H&C) to Farringdon. At Farringdon, change to the Northbound Thameslink platform; there are lifts to help you do this if need be. Note you could also change at King's Cross St Pancras but this station is much harder to negotiate than Farringdon so going one stop further will probably actually save you time.

From Farringdon catch a northbound stopping Thameslink train. Have a look at the station list, and ensure Mill Hill Broadway is in it (the train will likely have a final destination of Luton or St Albans). There seems to be a train which stops there about every 5-15 minutes (at uneven intervals) off-peak. Non-folding cycles are allowed on Thameslink trains subject to their policy — in short, no bikes on trains towards London timed to stop at Central London stations 07:00-10:00, or on trains away from London timed to stop at Central London stations 16:00-19:00 (since this isn't defined, I would personally assume Central London extends as far north as St Pancras International and no further; and as far south as London Bridge but no further, but that's just me).

Alight at Mill Hill Broadway. From there, cycle to Woodside Park; it's probably about 5-6km. This mostly follows the route of London Cycle Network Route 89 which can be seen on OpenStreetMap — though bear in mind that this will likely be quite a low quality cycle route, in that it will likely just be bicycles painted on quieter roads across London and not a dedicated segregated route or even lane in most places.

Another option from Mill Hill Broadway is to cycle to Mill Hill East (including the option of cycling along part of the trackbed where the line used to continue further beyond Mill Hill East, which has now been converted into a cycle path), then catch the Northern Line train to Finchley Central, then another Northern Line train to Woodside Park. There's only one platform at Mill Hill East so that's quite straightforward, then changing at Finchley Central you should be able to just cross the platform island you arrive on to get to the next northbound train (no need to cross the line). This is obviously much more fiddly as it involves not one but two Northern Line trains, but it does involve a shorter and likely more pleasant cycle. The additional trains will cost an extra £1.50 on Oyster or contactless.

This is probably the middle route in terms of fiddliness compared with distance. Follow the Mill Hill Broadway instructions to get to Farringdon. From there, catch a Northbound Thameslink train that calls at Finsbury Park; the destination will likely be Cambridge or Peterborough. These run about every 15 minutes off-peak. You have the alternative option here of going to King's Cross St. Pancras as then you have more trains to choose from (some trains for Finsbury Park also run from King's Cross mainline station which don't pass through Farringdon), but again this is going to be much more fiddly so you'll probably have a smoother journey going the extra stop to Farringdon.

At Finsbury Park, alight the train, and board a Great Northern train which stops at New Southgate. These also run approximately every 15 minutes, and likely have a destination of Welwyn Garden City; do check that the train you're getting on stops at New Southgate! If you're curious, these trains have come from Moorgate, but you're not allowed to take cycles on trains between Moorgate and Drayton Green (one stop south of Finsbury Park) because this part of the line is basically an overgrown deep-level tube line! The Great Northern cycle policy for your purposes also restricts bicycles on trains arriving London 07:00-09:30, and leaving London 16:00-19:00.

From New Southgate you can cycle, again largely on Route 89, directly to Woodside Park. The distance is about 3.5km.

The third option which stands out to me on reading a map is to go to New Barnet. This involves the shortest walk/cycle of the three, but is also the most fiddly. Follow the instructions above to get to Finsbury Park and on a train towards Welwyn, but alight a couple of stops later at New Barnet rather than New Southgate.

From New Barnet is quite a short walk or cycle to High Barnet on the Northern Line. The distance is about 2km and largely follows London Cycle Network Route 88.

From High Barnet, which is a northern terminus of the Northern Line, take the first train advertised to depart (there should be signs telling you which one this is). Alight at Woodside Park, and you're there!

Non-folding bikes are only allowed on some parts of the tube. Tfl provides this map of the tube network, showing where bikes are allowed, subject to the hours you mentioned. 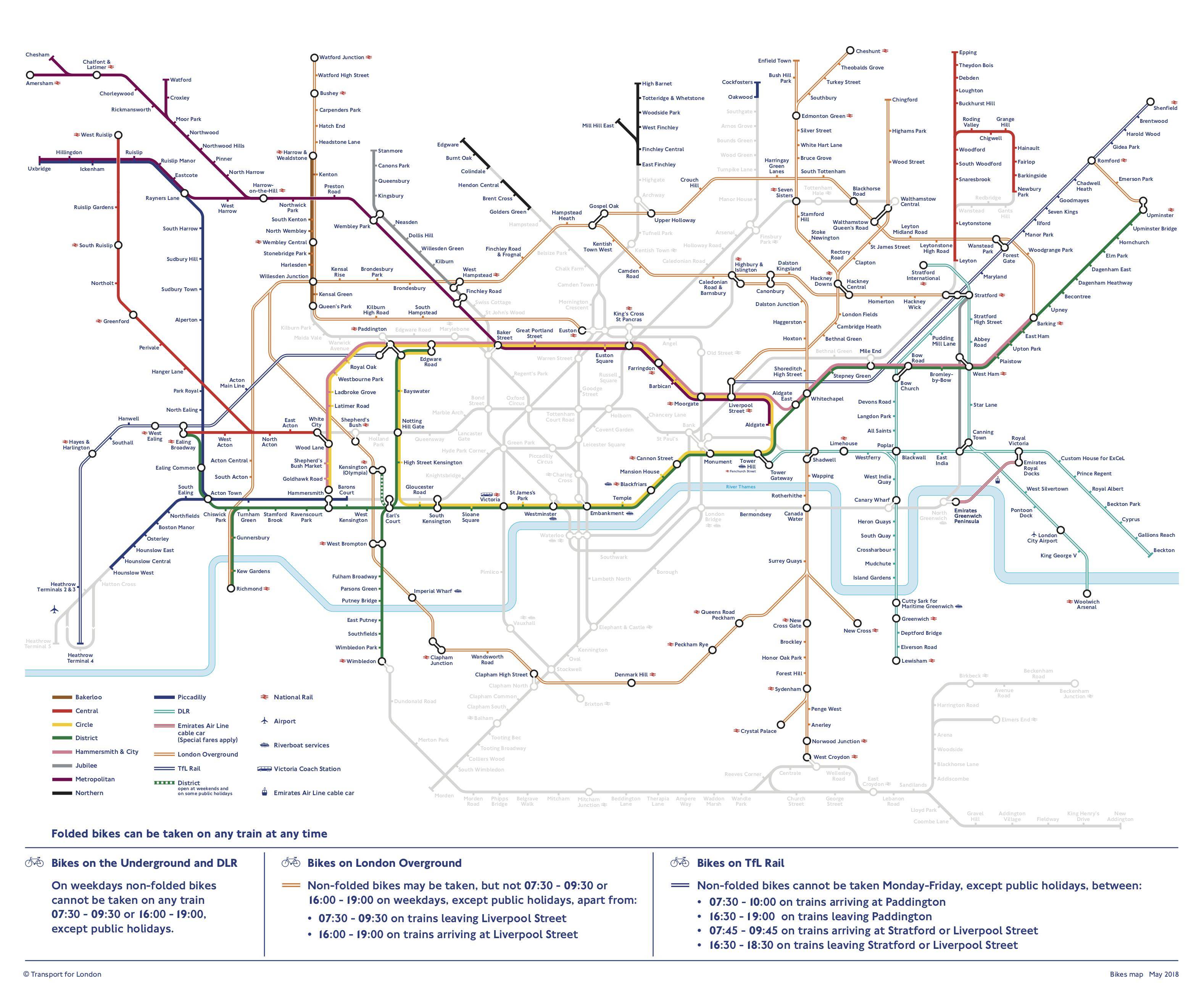 Bikes are allowed outside peak hours anywhere on sub-surface lines (The Circle, Hammersmith & City, Metropolitan and District lines). All the remaining, deep level lines have some restrictions on where bike can be taken. There is no route to Woodside on the tube from Paddington with a bike, since the High Barnett branch of the Northern Line doesn't allow bikes south of East Finchley, at any time. This is because many deep level platforms are only usually accessible by escalators, which bikes aren't allowed on.

Bikes are allowed on the Overground, and on National Rail services (subject to the rules of the various train operating companies). Unfortunately, Woodside Park is not very near to any other stations.

I would suggest that you could take a taxi. If you phone a taxi company and tell them you want to bring a bike, they should be able to send a van-style taxi which it will fit it.

I'm not sure why you don't want to ride it all, so this explores your options in case you do choose to ride. You can use the same tools to check out routes if you want to ride part of the way.

Cyclestreets is a good route-planning tool for unfamiliar bits of the UK. They offer a range of route: fast, balanced, or quiet. There's no such thing as a quiet route in London, but the quietest route they offer for this journey looks OK to me (9miles/15km/just over an hour via Hampstead Heath). Strava's route planner, with popularity mode turned on (i.e. going where people ride in practice) goes a little further east, up Kentish Town Road, which I'd ride but I can see why some wouldn't.

In cities I rate Cyclestreets slightly higher than Strava, as the latter's popularity option captures a lot of commutes, which are likely to be routes chosen to be quick for locals rather than pleasant for those unfamiliar with the area. Strava (for which you might need to register, but it's free) has the advantage that you can tweak the route to go round hills. Google's bike routing has its place, but this isn't it. In this case it uses a lot of main roads that it calls cycle friendly but that don't look very friendly to me.

Not the answer you're looking for? Browse other questions tagged public-transport london bicycles tfl or ask your own question.

8
Quickest way from London Paddington station to London City Airport?
18
What's the quickest way from London Kings Cross to Euston, by foot or tube?
1
Getting from Oxford to Saunderton (near High Wycombe), by public transport, before 9am?
14
Can I get from Gatwick airport to London by Oyster card?
19
Is there a map that shows the walking time between London Tube stations?
23
Paddington to Euston with kids: minimum walking by tube or by taxi?
3
London Family Travel Card Train Ticket
11
Travelling partially on oyster card, partially on a train ticket for the same journey to save money?
6
Compensation for Delayed Train Due to London Underground Issue