Why do airline tickets have titles in addition to names?

Every time you book a ticket, the airline website asks you for your title. As an example, here are the options provided on Lufthansa's website: 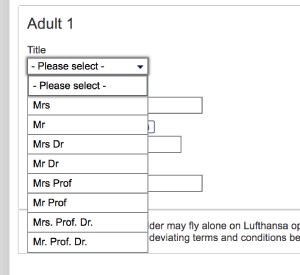 But why do airlines ask for the title in addition to the name? It's not like anyone ever asks you to prove that you're a doctor or a professor. So why not drop the Title field and just ask for the name and gender?

(inspired by this somewhat related question)

Airlines communicate with their passengers. Sometimes, in letters (emails these days) and sometimes verbally. In the past (and much of the software that runs airlines is old, or copied from older versions) proper address included a title. You could no more start an email "Dear Kate Gregory" than you could start it "Hey Kate" (as Netflix does when emailing me.) I know for a fact that airlines I use address me formally in emails, and if I happen to speak to a human, they also do. Like while boarding, "have a nice flight Ms Gregory" as they give me the boarding pass back after scanning.

The fact that many passengers don't want to be called Mr Whoever or Miss Whatsit doesn't cause the disappearance of those who do want to be addressed that way. The software exists, and sort of handles titles -- though clearly you can see design decisions from people who never imagined names ending in mr or dr, so the motivation to change it is very small.

In Germany, Doctor becomes legally an addendum of the name. Kind of medieval and never updated. The title is written in official identity documents, etc. This does not apply to Professor, but if you make a special case for Doctors, why not go the whole nine yards?

If you think Lufthansa is bad (they only use two titles plus address—or three titles if you include Mr/Mrs as a title), then wait till you see British Airway’s list:

On the other hand, Finnair does precisely what you suggest: 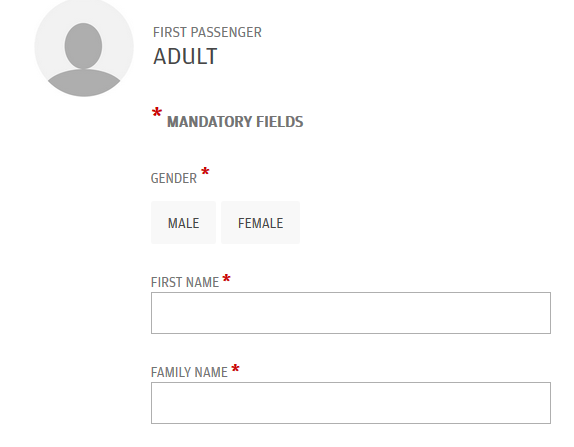 Given this glaring difference between three European airlines (and flag carriers) that should otherwise be very similar, I strongly suspect the underlying reason is one of culture, heritage and history.

In Germany, the title Dr. has a special legal status, can be added to your ID documents, your credit card and you can insist on being called Dr. Meyer. Prof. does not have this special legal status but still carries a general prestige with it; interviewees, for example on television, will often be titled Prof. in the name badge things that pop up at the bottom of the screen if appropriate (exceptions exist).

In the UK, aside from the old distinction Mrs/Miss still being kept (as well as the more neutral Ms being available) and the you’re-not-quite-a-Mr-yet,-boy title master, a lot of those titles that can be selected relate to the old aristocracy or still existing royal institutions (The Rt Hon). While indeed most of the time most of those titles would not be used, proper politeness in formal situations requires being aware of them.

In Finland, society is perceived as much more egalitarian. Thus, all those distinctions are irrelevant and it boils down to Mr/Mrs (although the selection fields are male/female).

To further elaborate, allow me to present the booking form of Deutsche Bahn, the German railway company where online tickets are tied to a specific person whose name must be entered. I couldn’t expand both menus simultaneously, the left one simply contains the options Herr and Frau or Mr and Mrs. In a sense, it is identical to Lufthansa’s except it separates the gender and title into 2 × 4 fields rather than one list of 8. (I didn’t think of using the English booking system, sorry.) 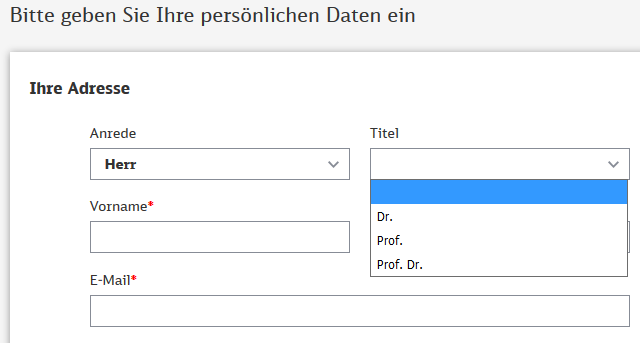 When travelling with business/first class with e.g. British Airways you may be greeted with your title. I for one have been greeted with "Lord" when flying with Club World.

First of all, not all airlines do this. I know plenty of forms that only offer mr/mrs or male/female options - but always at least that.

Some offer additional options for that field. If they do, it presumably for a simple reason: They know that at least some of their passengers like to be addressed in that way.

In many cultures and/or demographics addressing people with their title is considered important and people will take offense if it’s not done. And those who do not care can simply select mr or mrs - the inconvenience to them is minimal.

How to address your customers is not a question of right or wrong, but of knowing who they are. Instagram will never address users as “dear mrs user”, but if your bank starts important letters with “hey Kate” that would be just as wrong.

Title is a part of name

The reason for this is that traditionally (at least in some societies) the honorific title is an unalienable part of the full name when adressing someone. It's impolite to omit the title, and it's extremely impolite to use the wrong title - so if you want to address someone in a polite formal manner, you need to know their full name including the title.

You can't simply assume a title based on gender. Calling Sir John Doe as Mr John Doe is totally wrong; if your relationship allows that, then you might call them informally as John or Johnny or whatever, but if you address them using a title, then it must be Sir and not Mr, and of course for women there's the marital status implied by the title with you can't know without asking. The other option is to simply avoid using titles at all - but that means using language that's informal and (at least traditionally, at least in some cultures) considered not polite enough for companies addressing their customers with proper respect.

Not the answer you're looking for? Browse other questions tagged air-travel tickets or ask your own question.

274
My name causes an issue with any booking! (names end with MR and MRS)

8
Picking up Italian Trenord tickets booked online when departing from small train stations
19
Are flexible airline tickets ever worth it?
8
Are all airline tickets e-tickets?
37
What happens to plane tickets in case of airline bankruptcy?
69
Why do airlines offer more varieties of special-request meals than they actually provide?
7
Can I buy a complicated flight ticket online?
4
Round-trip vs. two one-way tickets—airline liabilities/obligations?
3
Airline ticket; missing one of two first names