Austria (Villach to Klagenfurt ) to Bled (Slovenia) without tollway

In December I'm planning to go to Bled as I'm passing through Villach by car with my girlfriend. I'm really not motivated to pay for the Slovenian motorways for a daily trip only and the public transport from anywhere in Austria to Bled is just a mess.

Does anyone of you have experience on that rather short route? Most of the websites on the issue are heavily outdated and Slovenia keeps upgrading streets and single roundabouts every once in a while.

So far my plan is to go via the Wurzenpass and following the Route 201 to Bled. (As Google Maps suggests) As I failed heavily getting there a few years ago via Loiblpass this time I want to be prepared better.

Is the suggested route toll-free? Are there better ways than the curvy Wurzenpass (in December)? And do you generally have suggestions or Alternatives?

Your best bet is still using the so-called "old-road" via Ljubelj pass. This is the route, as-per Google Maps (note that there's a "Avoid Tolls" option when plotting a route):

The road is wide and well maintained, however it DOES have parts which snake quite a bit because you need to climb over a mountain and drop back down again (after all, you explicitly want to avoid the Karavanke tunnel). There could also be a fair bit of traffic since a lot of locals commute using that route to avoid paying tolls and tunnel fee as well. The route is pretty well marked with road signs as well (you need to follow Loibl/Ljubelj/Tržič markings).

Since you're planning to drive in december, do double check if you have proper winter equipment - the road can be slippery and in cases of severe snow they WILL close it down and you'll be forced to use the highway. That will also be marked pretty early on the route so you won't need to do a big detour if that's the case.

As for other alternatives: since you need to pass a mountain, there's really no good other routes - it's either the highway or the pass.

In these cases I mostly trust the ÖAMTC internally they use publicly available software. Their "Routenplaner" gives a similar image like Google Maps, so I assume it's correct. I'll give it a try and hope I won't have to pay any toll.

Edit: Did it this way. Works!

You can go via Wurzenpass to Jesenice if you are in Villach already. The road via Trzic is a little weird, but no tollway included! 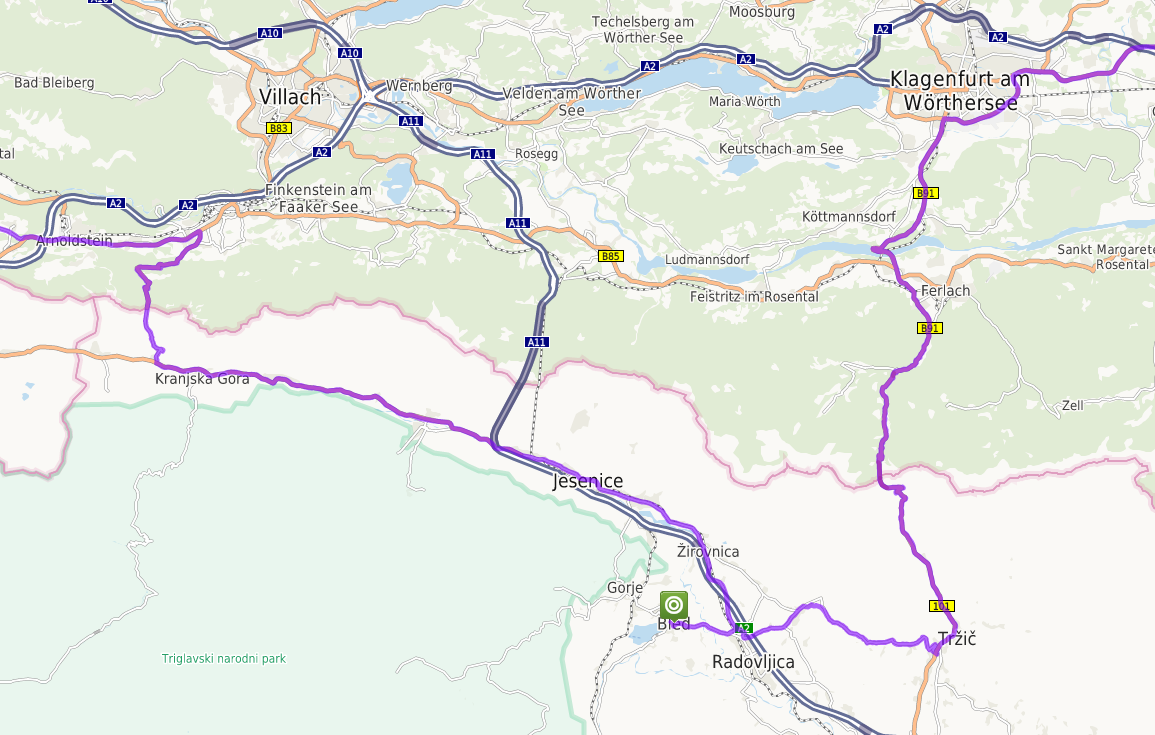 What I have found by putting that route into Apple Maps, is that the route from Klagenfurt to Bled which is toll-free is via the A2 as follows: 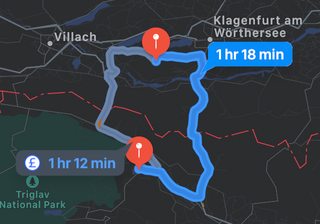 Not the answer you're looking for? Browse other questions tagged routes austria slovenia vignettes or ask your own question.

16
How to get to Ljubljana (Slovenia) from Trieste (Italy) by Train?
5
Is there any simple public transport route from Ljubljana Airport to Lake Bohinj?
1
Croatia to Ljubljana (Slovenia) for U.S. citizens ok?
0
Slovenia to Croatia with single-entry Schengen visa
9
How widely Master/Visa credit/debit cards are accepted in Slovenia (Julian Alps)?
7
Usually snow in northern Slovenia in mid-March?
3
Traveling from Portoroz, Slovenia to Ljubljana airport on Sunday morning
3
Schengen visa denied by Slovenia despite being the main destination
5
Obtaining travel vaccinations without insurance in Austria