Are there manual immigration checks for non EU citizens in airports when travelling inside the EU?

Are there passport checks at EU airports for non-EU travelers who travel between two EU countries?

Now I know that EU citizens are not subject to any passport or ID check whatsoever, just automated kiosks gates, but what about these intra-EU flights when it comes to, let's say, an American or Canadian citizen or an African citizen? Are they subject to be checked by immigration or not in case of an intra-EU flight?

I thought that there were lanes for EU citizens and non-EU ones, but are there lanes of intra-EU travelers as well, no matter what passport is hold by them?

EU citizens are subject to reduced checks, but they are nonetheless checked. Automated kiosks perform those checks in some places, but by no means in all.

Conversely, when traveling from one Schengen country to another, there are no systematic checks. There may be spot checks, but nobody gets an entry or exit stamp, and it's entirely normal to fly from one Schengen airport to another without seeing any government officers of any sort.

A system as you seem to imagine it could not exist, wherein some travelers must have their passports checked and others do not. In such a system, how would it be possible to prevent travelers who should be checked from going through with the travelers who aren't checked?

At passport control, there are separate lanes for people holding EU, EEA, or Swiss passports. The kiosks will normally be there, if there are kiosks, in addition to some desks for people who cannot use the kiosks for some reason. The other lanes are marked "All passports"; anyone can use them.

You edited your question to ask

are there lanes of intra-EU travelers as well, no matter what passport is hold by them?

No: for intra-Schengen travelers, passport control is avoided by having those flights use the part of the airport that isn't isolated by passport control points. Since they're not passing through a control point, there's no need for a special lane. (For travel between the Schengen area and non-Schengen EU countries, everyone goes to normal passport control according to the passport they're using, because the travel is not within a unified immigration-control area.)

There is nothing special about borders inside the European Union. There are border checks between EU countries for everyone, except for those EU countries that have decided to form a group of countries without border checks. Where there are border checks, these checks apply to everyone (how would they know who to check if the checks only applied to non-EU citizens?). EU citizens have an automatic right to enter another EU country, but they need to show proof that they are an EU citizen. On the other hand, there are no customs checks inside the European Union: you don't need to pay tax on imports from another EU country.

For example, the United Kingdom is (currently) in the EU, but it is not and has never been in the Schengen Area. When traveling between the UK and France, everyone needs to show a passport, identity card or similar document. Conversely, Norway is not in the EU but is in Schengen, so there are no border checks between Norway and Sweden. Switzerland is in the Schengen Area but not in the EU and not in a customs union with the EU, so at Swiss borders, there isn't systematically an immigration check, but there are frequent customs checks.

There may or may not be special lanes and special automated gates for people holding certain kinds of identification papers. That's just a detail of how the border check is organized.

You have to state more clearly what you mean.

The EU is not identical to the Schengen Area. Here's a map showing the difference: 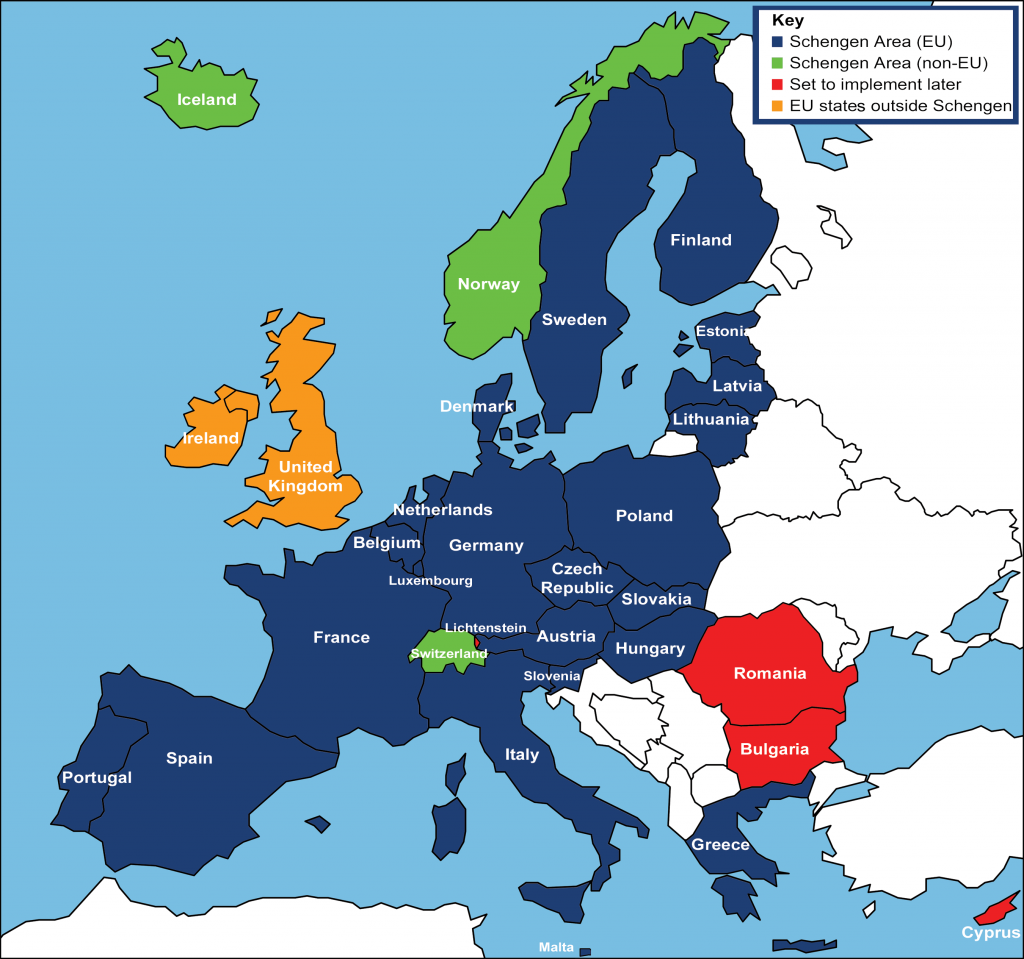 Now within the Schengen Area, there are no regular border controls, neither for EU citizens nor for others. You anyway wouldn't be able to differentiate between those two classes without some kind of check, right?

That does not mean that spot checks never happen, and the Schengen rules occasionally get suspended for certain borders, e.g. during the 2015 refugee crisis. However, after having travelled to almost every country in the Schengen Area, I can say from personal experience that neither me (EU citizen) nor my wife (not a EU citizen) have had border controls anywhere and the only difference between us is when entering the Schengen Area.

Airlines occasionally ask for your passport in addition to your boarding pass. That isn't a border control, just the airline checking its passengers.

Everyone is supposed to be (occasionally screw-ups happen) checked when entering or leaving the Schengen area. For EU/EEA/Swiss citizens these checks are sometimes be automated via e-Passport gates, but for non-EU citizens, they are always manual. In most Schengen countries, you must be 18 or over to use the automated gates, but in the UK you must be 13 or over.

Special rules apply to travel between the UK and Republic of Ireland (ROI) (so long as you are a citizen of one or the other). This is called the Common Travel Area. The border is completely open and you can travel across it freely. Passports are not needed for air/sea travel: any form of ID is valid, however, some travel companies or airports may choose to only accept passports as ID. It is always advisable to travel with your passport if you need to prove you are a citizen of the UK or ROI.

The remaining countries have conventional entry and exit checks for those going to and coming from the country.

Immigration checks can be made between Schengen Countries, but as a general rule they are not.

Authorized authorities may make Passport or ID checks within each country when they deem it necessary in accordance with their laws.

European citizens are required to prove their citizenship in such cases.

Inside-Schengen travel is being modeled after the practice in the United States.

Stay out of that area. The way you get in that area is by booking a discount Schengen-Schengen flight via an outside-Schengen transfer point like Heathrow. Consider the fate of this poor person. They didn't know they had headed into an international terminal, couldn't distinguish gun-check security from immigration, and didn't realize the stock of passport-stamping supplies on the person's desk means their passport would be stamped, and that was death to a single-entry visa.

So book all-transfers-inside-Schengen travel only. Learn the diference between "gun-check" security, and immigration exit controls. The gun-check guy will ask for boarding pass and (any acceptable) ID, but he will be right in front of the body scanners, and Everyone will go through this, even pilots.

If there are EU/non-EU lanes, You Are In The Wrong Place. Get Out. Tell them "Whoa, yeah, this is a domestic trip to [Schengen city], I'm in the wrong terminal!"

Of course, while there are no systematic checks, there are always random spot-checks; and pulling the "Whoa" trick in front of an IO is a good way to get a spot-check.

Not the answer you're looking for? Browse other questions tagged air-travel customs-and-immigration europe or ask your own question.

25
My passport was stamped with an exit stamp while transiting to another Schengen country via Turkey. Was this a mistake?

19
Why are passports checked at the check-in counter, Immigration and even at the gate?
30
Why does Ryanair check non-EU passengers' visas on intra-Schengen and domestic flights?
3
Can American/Canadian NEXUS card holders use APC kiosks at immigration at US airports?
6
How does US preclearance work in Dublin?
3
Status of APC (automated passport control) kiosks in US airports?
4
What fraction of those using Express Lanes at UK immigration have to see an officer?
9
Do exit immigration officers care if you’re heading to a country you are obviously not allowed to visit?
40
If a US citizen shows up at the US border with no US passport, are immigration officials obligated to help them prove their identity?