Do I have to expect snow at 3900 meters above sea level during summer?

I'm planning to climb a high mountain during end of May, beginning of June, in the Yosemite National Park. The mountain is around 3900 meters above sea level. In Switzerland, I would expect that there will be snow on the top, except maybe during July and August.

But what about the region around Yosemite National Park? Do I have to expect snow there? Is there any report that I could check to see if there is still snow?

At about mid summer in 2003 - the hottest summer ever recorded until then - we saw substantial quantities of snow on north facing slopes in Yosemite at around 3200 metres altitude. This was at the location shown by the + in the middle of this map looking South East across Ellery Lake.

As that was substantially lower than your 3900 metres, on a probably hotter year and close to midsummer, you'd be wise to allow for snow as a distinct possibility, but not a certainty.

In late June 2003, the then hottest year on record, we travelled by car from Mono Lake into Yosemite. The road rises to around 9600 feet at the highest point at Ellery lake, and the road then remains at about that level for some miles.

There was no snow immediately near the the road anywhere but when we got to Ellery Lake there were substantial amounts of snow on the slopes on the far side of the lake. These are more shadowed north side slopes rising to about 11,000 feet.

Your 3,900 metre road is at 12,800 feet (!) which is well above the level we saw snow at. Further into the park from Ellery lake the top map says "Closed winter" but the altitude is about the same as at Ellery Lake.

Location map here - viewpoint and direction of view about right. Snow may hav ebeen somewhat higher up slope than shown. Photos available. 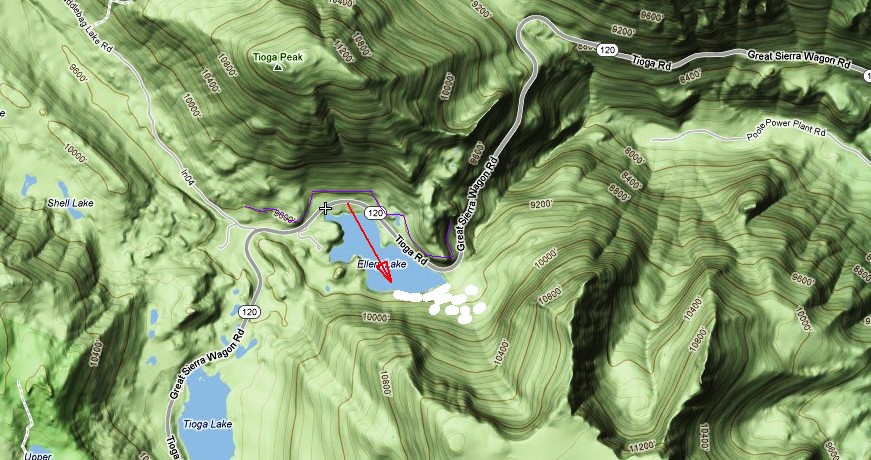 I would definitely come prepared for snow at that elevation in late May.

As a possibly useful guide, you could look at the historical closing dates for Tioga Road. Tioga Road, the only east-west thoroughfare through the park, is closed by snow during the winter, and typically does not reopen until May or June. (Note that the reopening date is not the day when all the snow had melted; it's the day they were finally able to finish plowing it.) The high point of Tioga Road is Tioga Pass at 3031 meters, and you will be 900 meters higher than this.

This is also important if you were planning to travel on Tioga Road to get to your trailhead; it won't necessarily be open in time for your trip.

The exact answer will vary from year to year depending on the weather, both in terms of the volume of snowfall and how warm the weather is.

For the most part, the majority of snow in and around the Yosemite valley will have melted by the time you're talking about. The National Parks Yosemite website specifically states that :

The more moderate elevations, around 7,000 feet, typically melt by mid-May while the higher elevations, 10,000 feet and up, usually aren't accessible until mid-June or later.

The best source of information about conditions is normally the NPS website linked above - and you can even check the conditions yourself for many of the locations on their Webcam page.

Not the answer you're looking for? Browse other questions tagged usa weather-and-climate snow yosemite or ask your own question.

9
How to prepare for a trip to the Half-Dome in Yosemite National Park?
8
Are hotels in California fully booked during summer or is it easy to get a hotel room?
6
I am planning on a sight seeing trip in China during this summer, How can I keep my passport, wallet, and phone safe without overheating?
3
How should I prepare for potential flooding in Utah and Arizona?
3
Are Turkey Black Sea beaches suitable for bathing in summer?
12
Avoiding crowded times in southern Utah national parks and monuments
4
What to expect about the mobile phone usage during a flight to China and based on the CAAC regulations
5
Snow on the Yukon roads in summer