Is it impolite to ask for halal food when traveling to and in Thailand?

I have recently planned a week-long vacation for Thailand where I wish to visit multiple cities and sites Thailand has to offer.

I am repeatedly told that being a Muslim I will have to face difficulties regarding food & drinks as non halal food is quite common there and I, being a Muslim, refrain from those things.

I will hopefully work my way around restaurants and cafes. but my question is, If i repeatedly ask them if the hotel/cafe serves non-alcoholic and/or non halal products i.e. pork or any other meat not considered halal for us.

Similarly, On International/Domestic flights to such destinations, Is it considered to rude to ask for Halal products only?

Thailand actually has a significant Muslim minority (around 5% of the population), so the idea of halal food -- locally known as ahaan Muslim (อาหารมุสลิม), literally "Muslim food" -- is well understood, and you will not be considered rude for asking. Thailand's Muslims are heavily concentrated in the South near the Malaysian border, but Bangkok also has a significant community.

That said, no, the average Thai restaurant is not going to be strictly halal, and the Thais do love their pork, so you definitely need to check what you're eating. As elsewhere in SE Asia, halal restaurants tend to say on their signage, with green banners, crescent moon and star logos and the word "halal" in Arabic. This may prove a useful starting point: https://www.halaltrip.com/other/blog/a-muslim-traveler-s-street-food-guide-to-bangkok/

Domestic flights in Thailand are quite short (Bangkok to anywhere in the country is well under two hours), so food is typically not served. You can definitely preorder halal meals on longer, international flights, you can't count on them being available otherwise.

I have a very simple rule:

If you have to ask, it is not halal. If it was halal you would clearly know it by virtue of signage in any non Muslim country.

Halal food in non Muslim countries is a minority speciality and there’s no point in someone serving halal food without promoting it clearly, in such places.

So if you haven’t seen the sign on or in a shop, don’t even bother asking. Assume it is not halal. This works for me almost everywhere.

Since your question was primarily about Thailand, look for this sign on any food outlet you're interested in. If you don't see that or a similar looking sign, move on. It may not be impolite to still ask, but it doesn't serve your purpose and it wastes your and theirs time. 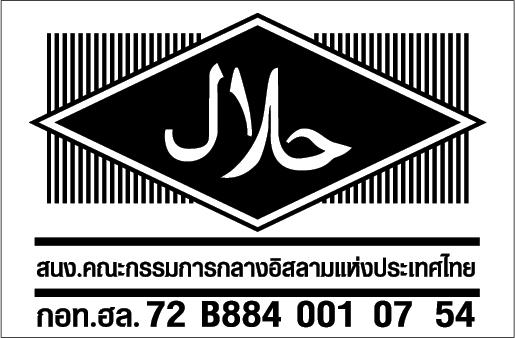 All of the commentators saying It is OK to just ask and accept the word that most of our products are halal unfortunately do not comprehend the concept of halal as a practicing Muslim would take it.

Even vegetables, cooked in pork fat, or with one millimeter of alcohol can be deemed Not Halal.

Even Fish or Chips, fried in the same oil that Pork was fried in, is considered Not Halal by most schools of Islam.

If you really are serious about it, look for the government sanctioned sign!

For long distance flights, ordering a special diet meal is a well established procedure. When you have bought your flight tickets, just contact the airline customer service and ask for a halal meal (usually needs to be done at least a few days before the flight). There is nothing impolite about this.

If you forgot to pre-order your special meal, or you for some reason needed to change your flight plans last minute, you can explain this to the flight attendant and they will usually do what they can to accommodate you. As long as you are humble about it, this will not be seen as impolite.

For short distance flights, they normally just serve lighter snacks, and it is not possible to make a special order. You can always ask the flight attendant about the snacks served and if you are not confident that they are halal you can politely decline. There is nothing impolite about this.

It's definitely not impolite to ask. In some countries (but not in Thailand I believe) it is considered impolite to say "no" so some people would think it is polite to lie and answer "yes" rather than "I don't know" or "no, it isn't halal", so you'd need to be careful.

But in many countries, including Thailand, sellers know that they have more potential customers if they sell halal food, so you will have places selling food marked as "halal".

I have been told that if you are told that food is halal, when it's not obvious whether it is or not (like you can't really see whether a steak is halal or not), and you are lied to, then you are fine from a religious point of view. The same person (who is not a very strict muslim but knows the rules) told me that he can taste the difference between meet that was slaughtered in a halal way or not. But that is obviously entirely up to you.

And obviously you may have problems. The restaurant owner and the chef might not know if their beef is halal and tell you - the rules about being lied to don't mean you can eat beef if it is not known to be halal, only if the chef lied to you and claimed it was halal. If you like fish, you should be fine.

Not the answer you're looking for? Browse other questions tagged food-and-drink thailand islam dietary-restrictions or ask your own question.

11
Where to buy Thai Bahts when traveling from New Zealand to Thailand?
8
How difficult is it to eat and drink during ramadan in Thailand and Malaysia?
18
How to ask drivers not to take me to the bus station when hitchhiking in Thailand?
5
How to get a tourist visa for Thailand when already traveling?
106
Is it rude to ask if the food contains pork or alcohol?
8
Tipping for meals in Thailand
1
Thailand Visa On Arrival for Indians when not traveling directly from India
2
Traveling to Thailand, immigration and customs check 3 times?