How long to get a new passport in the US?

If I am in the US, am US citizen with a US passport, and my passport was lost, how long would it take to get a new one, if I can spend a lot of money? I see services online such as "rushmypassport", but I don't know if these are legitimate or if they just speed up the delivery process, once the passport has been made by the government. To clarify, I'm wondering how long the whole process will take.

The State Department has a helpful page on How to Apply for a Passport.

In 2009, I renewed my passport by mail, using the normal service. It took two weeks, so it doesn't seem worthwhile to pay for the faster service unless you really can't afford to receive the passport late. That is, if the service is still so prompt.

I wanted to test this when I renewed earlier this year. Passport application volumes have risen considerably since the advent of the Western Hemisphere Travel Initiative, with 14 million issued in 2009 and 21 million issued in 2018. I had seen a few other mentions online of people receiving their passports within two weeks, but they were all a few years old.

Unfortunately, I neglected to send the application off soon enough, and found myself with a trip coming up in late July with an expired passport and only three weeks before departure. I was also reluctant to use the mail-in expedited service because I have had a good deal of trouble receiving packages -- I live in an apartment building with no doorman, so non-post-office deliveries can be tricky, and my post office has lost a couple of my packages and sometimes claims that I've been notified of a package delivery attempt when I have not been.

So I decided to make an appointment at the passport office in New York, which is about 20 minutes from my office by subway. The only appointment available was on Friday, a week before my flight.

After waiting in line with my completed application and the supporting materials (including my old passport) for maybe 45 minutes or an hour, I gave them to the worker behind the window, who said they would call me if there were any problems, but she didn't anticipate that there would be, and that the passport would be ready for me to pick up on Tuesday when the office opened. When I went to pick up the passport, the packet had a handwritten note on it indicating that it had actually been scheduled for delivery on Monday afternoon.

In your case, the process might take a bit longer since you do not have your old passport to submit, and therefore must apply with DS-11 instead of DS-82. I doubt that would add more than a couple of days, if even that much: the times published by the passport office do not depend on which form an applicant is using.

In short: if you don't need your passport urgently, and don't mind waiting a couple of weeks, just mail in the application (and please post an answer reporting how long it took).

If you want more certainty that you'll have it within three weeks, use the mail-in expedited service.

If you have travel plans within two weeks (or plans for which you need a visa within four weeks), and you can get to a passport office relatively easily, the in-person service is probably the way to go. For me, at least, the peace of mind of not having to worry about it getting lost in the mail was well worth the two trips to the office.

You have two options that can speed up your passport:

An expedited processing option - This process can speed up the processing time from 4 to 6 weeks to 2 to 3 weeks. This will be an extra fee of $60. 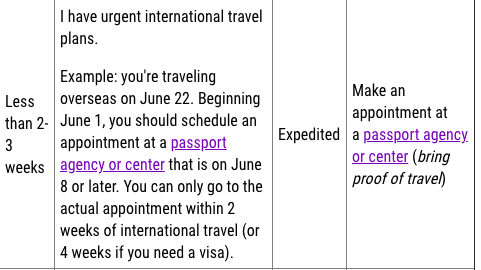 An expedited service - From a Google Search, some view services like Rushmypassport as not useful (some haven't had their passport returned for example), and no different to using the expedited service, whilst others recommend the service and say that it was useful.

Other express options can be viewed here.

3
Can you get a new US passport without reporting it to the police first?

8
How can I get a US passport photo mailed to me based on an existing digital picture?
8
As someone with dual nationality, can I exit my home country (New Zealand) on the passport of another country?
6
Change Passport Information about Citizenship and Issuing Country
0
Is it possible to plea for a speed up during a transit visa application?
3
How can I get my US passport from abroad?
6
Best strategy to get a cheap long-term mobile SIM card for the US?
1
Urgently request passport back from US embassy without visa. Processing time?
6
Lost/Stolen Passport but travel is before the 1 week fast-track service UK
11
Can I apply for a passport in the country I'm in so I can travel to my home country?