How to go from Madrid Airport to Gran Via?

I've seen several options using bus and subway in Google Maps, but I am looking for both the fastest and the cheapest way. I am also looking for a way to do that with the least number of line or interface changes.

The fastest way to get into town quickly (barring a taxi, which is expensive and whose speed depends on traffic conditions) is the commuter trains, Cercanías (journey planner, network map). These trains are also cheaper than the Metro when you're going from or to the airport (€1,75 for a 3-zone Cercanías ticket, vs €5 for a Metro ticket from the airport to the city).

The downside of Cercanías is that they stop at fewer places. Line C-1, which starts at the airport, stops at Recoletos, which is about 700m from the eastern end of Gran Via. You can change at Nuevos Ministerios for line 3 or 4 and get off at Sol, the next stop: that's about 300 to 500m from anywhere on Gran Via. You can go from the ticket machines at the airport to street level on Puerta del Sol in 30min, not counting the time to wait for the train at the airport; the train only runs every 30min.

If you want to go to a precise Metro station, change for the Metro in the city. You'll need a separate Metro ticket: €2, or possibly down to €1.50 if your Metro trip is no more than 9 stations long. If you're going to take the Metro a lot, get a 10-trip ticket for €12. You can change at Chamartín and take line 1 to Gran Via, or change at Nuevos Ministerios and either take line 6 and change at Cuatro Caminos for line 1 to Gran Via, or take line 10 then change again at Tribunal for line 1, or simply get off at Tribunal and walk a bit.

You can also take the Metro (journey planner, network map) all the way from the airport: take line 8, change at Nuevos Ministerios for line 10 (see above) or change at Colombia for line 9 then at Núñez de Balboa for line 5 to Gran Via. The trip takes a little over an hour, so although the metros are more frequent, this doesn't compensate for their being slower than Cercanías.

Without doubt, the best option is the subway. You have to jump into the Metro line number 8 (the only one at Barajas Airport), then change to line 4 (Argüelles) and wait more than one hour until you arrive to Alonso Martinez stop. Then change to line 5 (Aluche) and only two stops later you are in Gran Via stop. The ticket is between 4'50 and 5 euros (depends on the final station). 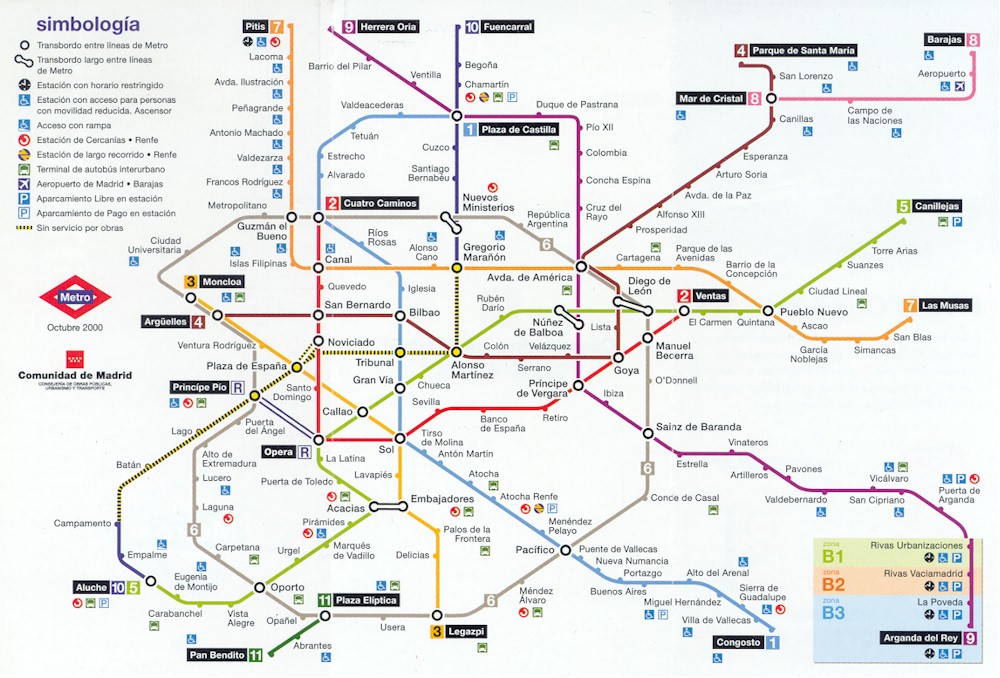 Anyway, think that Gran Via is a big street and maybe you are more interested in other nearby stop.

Not the answer you're looking for? Browse other questions tagged airport-transfer spain madrid mad or ask your own question.

2
What is the cheapest public transportation from the Madrid airport to downtown?