Differences between the Routes of the Camino de Santiago

I will be a first time "pilgrim" in July of the Camino de Santiago (Way of St James) and am deciding on the various routes. Can someone explain what differences are encountered on the routes - how strenuous, distances between places, popularity, for example?

I've been researching routes for my trip to the Camino in June/July. It appears that the most popular routes are the Northern way and the French way. Here are the differences between the two.

I still think this is an amazing trail if you want to meet some very interesting people and have a truly life-changing experience (that is if you can deal with some issues i mentioned above). However, I'd probably never walk the French way again just because it's slowly turning into a dump.

From meeting others who have completed it I keep hearing that the Northern way is becoming more popular, but still doesn't get nearly the same number of pilgrims as the French way. There doesn't seem to be many Albergues, still. And some folks find themselves frantically running to the next stop to secure a spot for stay. So definitely pack a tent here! This route would be my next Camino adventure for sure.

So to sum this up, if you want a truly spiritual, authentic Camino experience which includes meeting a ton of people and hearing their stories - take the French route. If you like challenge, don't mind solitude and want gorgeous scenery - take the Northern route.

Update: From Sergei's answer the french way is the red one and the nothern way is the blue one.

Here is an overview of the routes closer to Santiago. The red route "Camino Francés" is "The Way", the well known one. Very busy at the end. It starts in St. Jean Pied de Port, France.

The other routes are not as popular therefore the infrastructure isn't as good as on the Camino Francés. 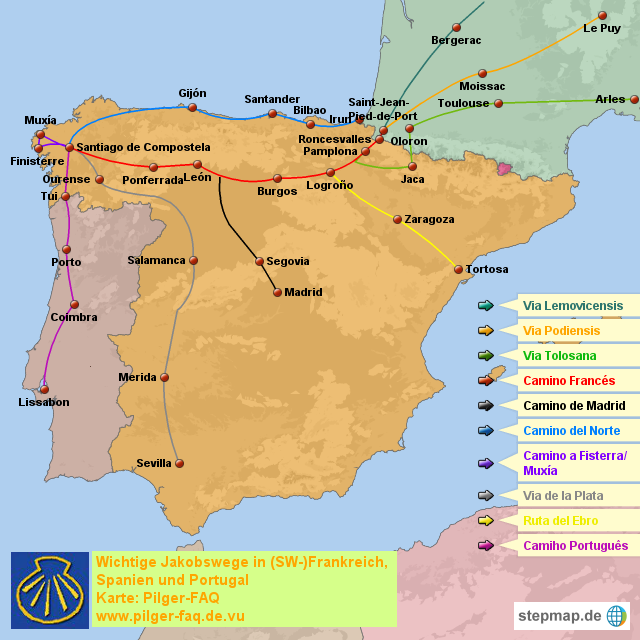 Thanks to Hermann from www.pilger-faq.de.vu

Not the answer you're looking for? Browse other questions tagged spain routes hiking pilgrimages or ask your own question.

18
Are there any websites or resources for planning bicycle routes across western Europe?

5
Travelling to the Sacred Well in Walsingham Norfolk (Sacred Spring in England)
13
Recreating Hemingway's Trip to Pamplona (Part 1)
5
Is the St-Jacques de Compostelle pilgrimage realistic for a non-experienced hiker?
13
Booking Kilimanjaro Trek in advance?
7
What St-Jacques de Compostelle routes offers the most sightseeing while remaining well supported?
2
How to manage route if we need to visit Yogyakarta and Komodo Islands from Bali and then return to Bali?
6
What are the differences between Barcelona Pass vs Barcelona Card vs Barcelona City Pass?
2
Week to spend in Istanbul/Turkey alone at short notice - walking options?
0
Traveling the Camino Trail during Covid
0
Choosing between 2 google map routes