How to avoid "overtourism" in Japan?

Recently there are many news stories about "overtourism" in Japan:

Whilst Japan’s promotion as a tourist destination is incredibly important, JNTO is aware of cases of ‘overtourism’ in which local residents of some tourist hotspots have been affected by a surge in the number of visitors from overseas.

Question: As a tourist in Japan, how can I avoid these places?

For instance, I heard from friends living in Matsue and Aizuwakamatsu that both of these small cities are desperately trying to attract foreign tourists, and are suffering from being out of the beaten path. So I went there and had a great time. I also noticed the absence of foreign tourists, indeed if these friends had not told me, I would have not known about these places.

Is there perhaps a kind of website or map or app where I can check whether a given place currently welcomes tourists or not? Ideally based on the local population's sentiment about the topic.

Some statistics on how many tourists each prefecture receives can be found here.

Last year, the top ten prefectures for overnight stays by foreigners were:

The ten least popular prefectures were:

Basically if you want to avoid the crowds then Tohoku and Shikoku are your best bets.

I visited Japan last year after four years away and was really shocked by the sheer amount of visible foreigners in Tokyo these days. Tokyo has always been full of English-speakers but the change in 4 years is amazing.

I went up to Fukushima and Yamagata though and the only visible foreigners I saw were one elderly British couple. The stats confirm it isn't massively popular with other Asians either.

Map showing hotel rooms occupancy rate in 2018, the deep blue prefectures have less than 55% occupancy, which probably means that you can go there without worrying too much about contributing to overtourism: 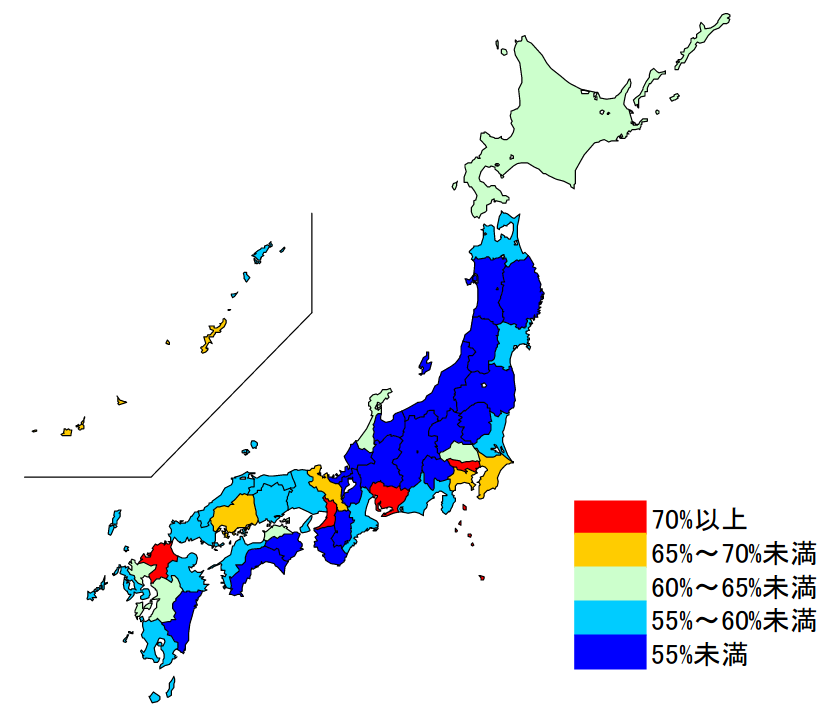 Not the answer you're looking for? Browse other questions tagged japan sightseeing local-knowledge or ask your own question.

5
How to avoid the the multitudes during Obon week in Japan?
8
Best time to see cherry blossoms in Japan?
11
How to find public trashcans in Japan?
46
Taming the nightmare of public toilets in the UK
14
Are Ginkgo trees in Japan rare and if so, where can I find them?
5
Transportation in Miyazaki Japan
4
How/Where do I make local friends in a short-term (1 month) stay in Japan?
10
Japan - Any places similar to Midnight Diner?
8
Concerning Covid-19 quarantine on return to Japan as a non-citizen resident