Can't stopover at Sapporo when going from Asahikawa to Chitose airport?

Yesterday I travelled from Asahikawa to Chitose airport (in Hokkaido, Japan), as on this Hyperdia screenshot (except I planned to take a later Airport service after having lunch in Sapporo). 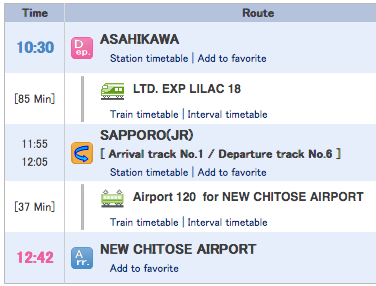 Now since the trip is over 100 kilometers (184 to be precise), my ticket said it was valid for two days, and I believe it allowed stopovers. However, when I tried to exit the ticket gates at Sapporo station, my ticket was rejected and I was told that if I wanted to exit, I had to pay an additional 420 yen. What gives?

The Hyperdia screenshot gives a hint: the curled arrow indicates backtracking, and that makes this trip a bit special. Here's a (simplified) diagram of the relevant train lines:

Now, as I explained in the linked question, it is not possible to travel on a single base fare ticket if the route involves backtracking, so your ticket was actually for Asahikawa-Shiroishi-Chitose, not for Asahikawa-Sapporo-Chitose, and you were supposed to transfer at Shiroishi, not at Sapporo.

Why, then, did the JR employee give you such a ticket when you asked for the itinerary showed on your Hyperdia screenshot? This is because your limited express train did not stop at Shiroishi (you can see this with Hyperdia's "Train timetable" link), and so it was not possible for you to transfer at Shiroishi.

In such cases, as an exception you are allowed to proceed all the way to Sapporo, even though it is outside the route covered by your ticket. However, the purpose of this exception is only to allow you to make your connection at Sapporo; in all other respects you must behave as if you were transferring at Shiroishi. This is why additional payment is required if you want to stopover at Sapporo: it's as if you were making a stopover at Shiroishi and then purchased separate tickets to go to Sapporo (210 yen each way).*

There are 47 such areas nationwide. To give one other example, when you ride the Resort Shirakami train between Akita and Aomori, you encounter the following situation (note that in this case there is not even any transfer, it's all the same train!).

When travelling from Aomori, it first travels on the Ou Main Line to Hirosaki, and then it backtracks and proceeds on the Gono Line to Higashi-Noshiro (and then to Akita). Note that it does stop at Kawabe after Hirosaki, but not before, so it is not possible to make the transfer at Kawabe (exit and wait for it to come back?). Thus the exception applies and you can make the whole trip on just one base fare ticket despite the backtracking at Hirosaki.

* As a side-note, I just checked and it is actually cheaper to buy two separate Asahikawa-Sapporo and Sapporo-Chitose tickets (3560 yen total) than one Asahikawa-Shiroishi-Chitose plus Shiroishi-Sapporo-Shiroishi (3800). Tickets for small trips like Shiroishi-Sapporo should be avoided as much as possible, as they are very expensive per kilometer.

Not the answer you're looking for? Browse other questions tagged trains japan japan-rail hokkaido or ask your own question.

15
When are stopovers permitted on Japan Railways (JR) trains?

12
Which train routes are permitted when going from Great Britain to other parts of the UK?
5
When going by a train from Paris to Amsterdam, can I hop off in Antwerp and then hop on again?
6
What's the easiest way to get to Sapporo, Japan from Misawa, Japan?
2
Going from Nice airport (Nice St Augustin) to Cannes when arriving late (~9pm)?
2
Why can't I get anywhere from Cleveland via Amtrak?
6
Going from Frankfurt Airport to Mainz by train - DBahn Strike?
47
Why can't we use the toilet when the train isn't moving in some countries?
32
What are my rights when I have a Sparpreis ticket but can't board an overcrowded train?
7
When going by a train from Paris to Düsseldorf (Thalys), can I hop off in Köln and then hop on again?