Why are Schengen and non-Schengen flights mixed at Corfu airport?

I am at Corfu airport, waiting for a flight to Athens, where I will connect to a flight to a destination outside the Schengen area. Because of the somewhat inadequate signs, I spent some time waiting at the security checkpoint for the international gates. Before I got to the front of the line, I noticed passport control desks behind the security screeners, which led to the discovery that the screening for domestic gates were down near the end of the arrivals area.

To my surprise, these are truly domestic gates, not intra-Schengen gates. Flights to the UK are mixed with flights to Germany, the Netherlands, and Austria: 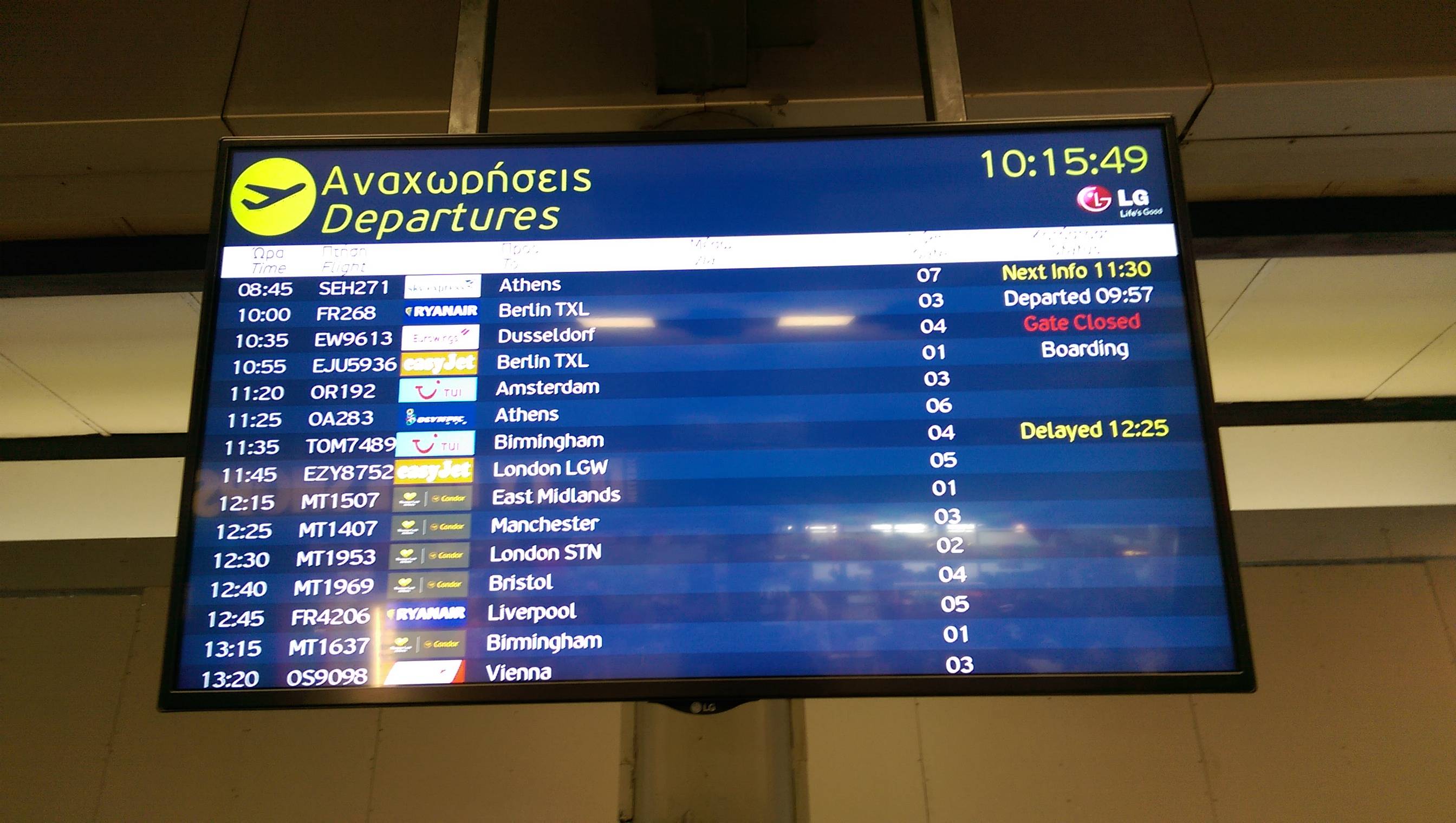 Why is it done this way? How does it work? It seems like it would be fairly easy to exploit this to get a Schengen exit stamp before flying to another Schengen country (for example with the cooperation of a confederate who resembles the traveler).

The political salience of immigration, technological changes, and concerns over terrorism have all contributed to a much tighter border enforcement but it's important to note that borders in (Western) Europe have long been much more open than in some other parts of the world. I remember the (pre-Schengen) time where many border posts between France and Switzerland were open or border guards would just wave you through after a cursory look. The police was not actively seeking people staying illegally and removals were reserved for people who came to the attention of law enforcement for other reasons.

Enforcement was based on formal or informal risk assessment (which might include racial profiling). Arguably, this is still the case: I don't have stats to back that up but I have the feeling that the French customs and police spend more resources patrolling the border with Italy or checking long-distance busses than checking the length of stay at international airports or Eurostar terminals. In that context, a potential loophole in a remote airport that requires quite a bit of money and ingenuity to be properly exploited isn't going to be a concern.

Recently, I have seen a similar setup in Toulouse: there is a Schengen terminal there but not all Schengen flights use it. I assume it's due to operational constraints: lack of suitable gates, quick turnaround between a non-Schengen flight and a Schengen flight when there is no dual-use terminal. The first thing the border guard asked is where I was flying to and they presumably treat passengers accordingly. I don't remember whether they checked my boarding pass but they could easily do that too.

The main issue is the inconvenience to travellers within the Schengen area, as one of the objectives of the whole thing is to make it easier to cross borders. After security, I expected a hassle-free walk to the gate and was surprised to stand in a (short) queue and be subjected to questioning by law enforcement (to be fair, being a citizen, the questioning was very cordial and superficial, but I tend to find that intrusive nonetheless).

On the other hand, I don't see any scenario in which the exit stamp is a huge issue. Exit stamps play an important role in the regulations but much like speed limits and traffic lights, enforcement doesn't need to be airtight for them to serve their purpose. There are countless reports of haphazard stamping in the Schengen area and many travellers can testify that border guards do not always spend time checking all the stamps in a passport.

And what good would your exit stamp be? It might be useful to hide a longer stay when you come back to the Schengen area but in the meantime you still run the risk of getting caught within the area without a coherent paper trail. Then, before coming back, you also need to find another loophole to leave the area, lest you show up at an exit border check with no way to account for your date of entry (and, worse, exposing the fact that you actively tried to dodge the rules).

Finally, if you are prepared to have a confederate walk with your passport just to get an exit stamp, they could easily do that at any number of airports in the Schengen area. All you need is a real or fake boarding pass, no need to actually fly to another Schengen country. They could then reenter on their own passport, directly or after flying inside or outside the Schengen area, it doesn't really matter.

Not the answer you're looking for? Browse other questions tagged schengen airports customs-and-immigration or ask your own question.

11
How can I find the arrival gate for a flight?
26
Why is security screening done at the gate in some airports?
30
Why does Ryanair check non-EU passengers' visas on intra-Schengen and domestic flights?
13
Why does immigration check passports at some Schengen-only terminals?
6
Travel between Schengen and Non-Schengen Country
3
Are there passport checks when going between EU and non-EU countries in the Schengen Area?
5
Can I go Schengen to Schengen via non-Schengen airport with a single-entry Schengen visa?
9
Intra-Schengen flights without passports: EU citizen and non-citizen spouse with 5-year residency
3
Why are passports controlled two times at arrival to Schengen countries?