Is there a way to encourage or even force airlines and booking engines to show options with overnight layovers?

Sometimes, airlines and booking engines offer options with overnight layovers, and usually present these as unattractive options (and usually they are, because not many people enjoy sleeping in airports).

Occasionally though they are in cities where one can easily spend a night, for example with a friend, and this turns the option into an advantage.

Is there a way to search for flight options that incorporate overnight layovers?

(Of course, it could be possible to search flights from A->B, and then flights from B->C the next day. However, such combinations can be more expensive, and may have different ticketing conditions.)

It's pretty standard for most airlines to offer layovers up to 24 hours, and up to 4 hours domestically. This is another case where the power of ITA Matrix (https://matrix.itasoftware.com) comes really handy!

In ITA Matrix, you can search for flights with a connection above a minimum length. Usually, if you search for connections longer than 12 hours, that'll yield you a bunch of overnight results.

You'll be presented with a page of results that may have some nonstop flights, but more importantly, has layovers of at least the length you specified. If layovers are over 12 hours, they're usually overnight!

Congratulations! You just got an extra layover in Hong Kong or Beijing. Note that you should also check if the visa policies allow this stopover, and get the needed visas if you want to leave the airport.

Once you've gotten a flight, you can head over to https://bookwithmatrix.com/ to book the resulting flight: for example, this flight with a 1.5 day layover in Beijing, with enough time to visit the Great Wall. 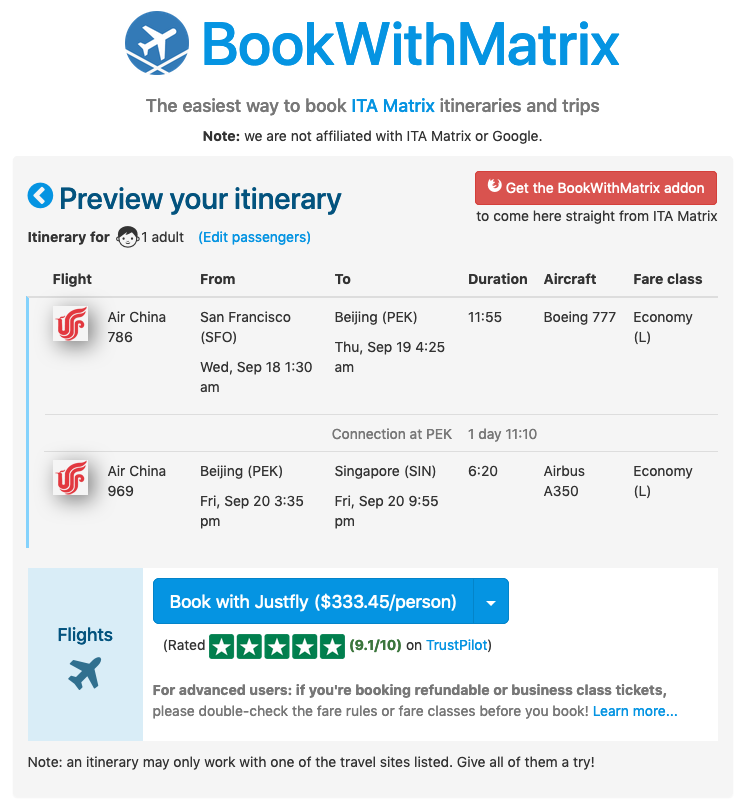 Searching for flights with stopovers (the term used to describe a long layover, usually over 24 hours, where you retrieve your bags and check them back in when you depart) is not an easy task.

Airline policies are very variable in this respect. Some airlines do encourage stopovers in their "home city", pushed to do so by local authorities. They will often have special deals for hotels, transfers, etc.

Cathay Pacific used to do that a lot for stopovers in Hong Kong, don't know if they still do. Some of the Middle-East airlines do so as well for a stopover in their home city.

Some airlines on the other hand have restrictions on stopovers (as they are seen as a way for business travellers to pay less for flights), including:

Doing a generic search is not easy, especially if you have flexibility on the number of days you are willing to stay, as this adds yet another dimension to the search.

The find such fares, there are multiple methods:

It's quite time-consuming though.

The way you would search depends a bit on whether you are set on a specific itinerary or are willing to consider multiple options.

Note that even if the airline does not charge more for the stopover directly, there may be additional taxes (1 arrival + 1 departure often costs more than 1 transit in many airports).

Try external website, where you can filter out easily too short connections (e.g. kayak), or just check the possible flights on different days (and check how many days you can do a stopover), then contact the airline. Unfortunately, in such way, it is difficult to compare different airlines.

Not the answer you're looking for? Browse other questions tagged air-travel bookings flight-search-engines stopovers or ask your own question.

39
Are there any flight price search engines with baggage allowance included?
17
What to do when no search engine can find a connection that clearly exists
20
Hotel booking sites with a calendar view, similar to flight search engines?
18
what is the most advanced flight search engine besides Azuon and Matrix?
8
Is there an easy way to compare which airfare search engines cover which airlines?
7
Avoiding red-eye flights for long journeys
8
Booking issues with Israir Airlines
4
Could I have found this flight plan without knowing to look for it?
6
Is there a way to exclude third-party booking websites on Skyscanner?