How TAP airlines counts miles from a partner airline

The following flight has 4 different options for how much money to pay: 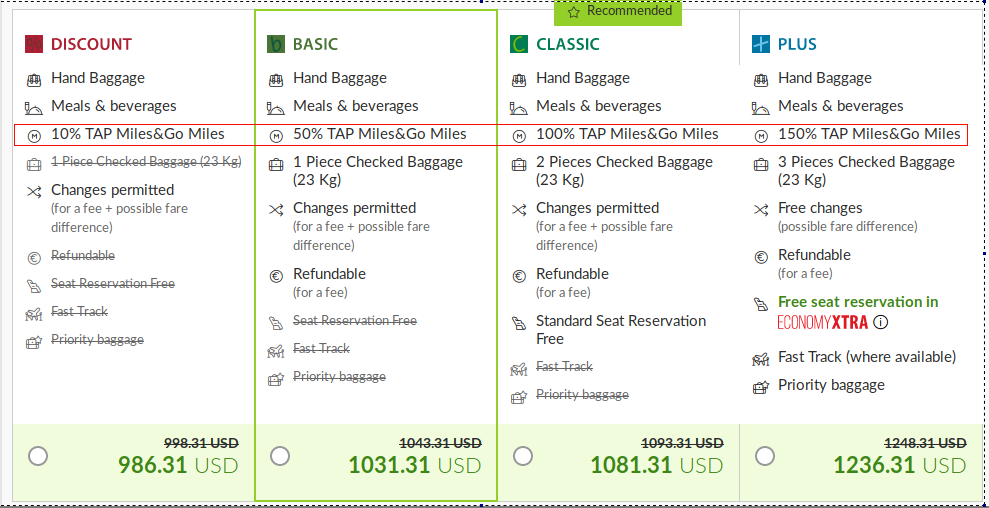 I assume that "10% TAP Miles&Go Miles" means that a 1000 mile flight would only result in 100 miles being added to your TAP Miles&Go account.

However, what if my account is with Turkish Airlines Miles and Smiles, which is a different Star Alliance partner? Is it still that we only get 100 miles for this 1000 mile trip?

The miles you earn when flying a Star Alliance airline and crediting to a different Star Alliance airline will depend on two factors - the "fare class" that your ticket is booked into, and the earning on the airline you credit to for that fare class. The earning rates on the airline you book with (in this case, the '10%'/'50%'/etc listed on that site) do NOT necessarily correspond to the rates you'll get when crediting to a different airline.

Each airline publishes earning tables for the relevant combinations - such as this one for TAP flights credited to Turkish Airlines Miles & Smiles.

The difficultly is normally finding out in advance which "fare class" your tickets are booked in. TAP's website will NOT show you those details until after you have actually booked your flight.

TAP's "Discount" fares can book into multiple different fare classes, including 'A' (no miles with TK), 'T' (10% miles) and 'K' (50% miles) so if you're booking via their website you really have no idea how many miles you are going to get.

Some other booking sites do show you the booking class, so booking via them will give you a much better idea of what you will earn. For example, Expedia shows the fare class at multiple stages during the booking process (here an 'A' class fare, which would earn no miles when credited to Turkish, despite earning at least 10% when credited to TAP) :

You have to check the Miles & Smiles earning chart for TAP, which has a table listing how many miles you will earn for various booking classes.

There are sometimes slight discrepancies between the various FF programs, and it’s usually quite difficult to find the actual booking class before booking (and even sometimes afterwards), though.

Note that some booking classes do not get any miles in your situation, and there may be complications in the cases of code shares (where the ticket is from airline A but the flight is actually operated by airline B), so double-check everything if miles are an important decision factor.

3
Is it still possible to find mileage run flights and if so, how?
3
Is it possible to transit through Istanbul airports on two different tickets while carrying luggage?
9
Redeeming miles from one program for partner airline ticket (Star Alliance)
13
Can United make me pay for rebooking a flight cancelled due to snowstorm?
1
Turkish Airline & Aegean Airline Interline Baggage
20
How can I calculate the value of any given airline's miles?
11
Booking a trip to earn airline status
5
Access to Star Alliance Gold lounges at Singapore with children
10
When should I use a green Star Alliance "Transfer" flag on my airline bag tag?