How to find bus maps for Paris outside the périphérique?

I'm staying in a little town just outside of Paris, and it seems to have plenty of bus service, but the train station is a bit far away AND it seems that you can't transfer from the train to a bus without paying again. So it would be convenient to take the bus for my whole route into Paris.

However, I can't find much information about these bus lines: 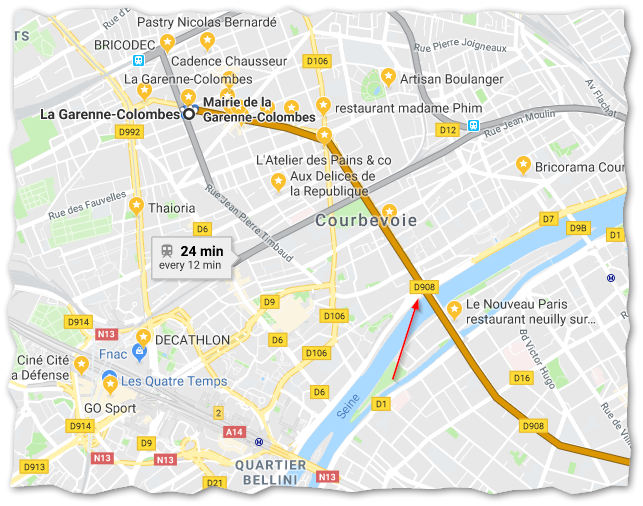 The standard bus maps just don't show these D lines and I can't find anywhere that does, nor much information about their routes or schedules, even in French!

Does anyone know what these are called or where they are documented?

The RATP (the public transit authority in Paris and Île-de-France) has "sector maps" (plans secteur) available on its website. These are PDF maps of the Paris bus and metro systems with roads, as well as different maps throughout the Île-de-France region -- so for example there are separate maps for Marne-la-Vallée, Seine St-Denis Est, Sud de Paris, etc.

In this case, the relevant map is that of Haut de Seine Nord (sector #6). You'll be able to find the aforementioned route 164 bus, as well, as the other buses that go through the Courbevoie area. Here is a screenshot of part of the map matching the Google Maps screenshot above:

What you see as bus lines - D6 abd D908 - are in fact routes Départementales i.e. roads that maintained by the Département they are in.

The bus you have highlighted seems to be bus 163 whose schedule can easily be found on Google maps, the RATP app, and even the Moovit app which is more comprehensive and international.

RATP (the Paris transport authority) publishes bus maps. On their website, select “Maps” then (the non-obvious bit) “Sector maps”. Finding the right sector can be a bit hit-and-miss if you aren't familiar with local geography; you need to know which département you're in. In your case, that's Hauts-de-Seine Nord.

The D+number indications are designations of roads. They are of some use to drivers, but of no use to take public transport. Most bus lines within the Paris city limits have a number in the range 20–99 and most bus lines in the suburbs have a three-digit number (but some local agencies have a different numbering scheme, some including numbers below 100!).

For the most part, buses around Paris are not designed for end-to-end transportation, but to take you to a nearby metro or train station. In the summer months, in the evening and on week-ends, buses are infrequent. During rush hour, buses tend to get stuck in traffic. While you can make a long trip by bus if you want to, and it might be scenic in some places, it's likely to take very long indeed.

An ordinary bus/metro ticket ticket t+ allows you one bus/tram trip anywhere in Paris and the suburbs (excluding some express lines which are more expensive and require you to use multiple tickets). There's a time limit on the ticket, so you can't use a single ticket to cross the whole region: the ticket stops being accepted 90 minutes after you initially stamped it (after that you can stay on the bus that you're already on, but you can't transfer anymore). You can use a ticket of the same type on the metro (and RER within the Paris city limits), but you can't do a combined bus/metro trip with the same ticket (there's a plan to allow that, it was even announced for 2019, but so far the rules haven't changed, and it might end up only be implemented for the new electronic pass and not for paper ticket).

You might prefer to get a day pass for zones 1–3 for 10€ and then you can take all the trains, RER, metros, trams, and other public transport you like within the chosen zones. If you're staying for several days, you can get a weekly pass (Monday to Sunday only, you can't do mid-week to mid-week) for 27.80€ covering the whole region. This includes a one-time 5€ fee to get the pass itself. If you're staying from Friday to Sunday, it's cheaper than 3 day passes, but unfortunately you have to purchase the pass on Thursday at the latest: if you get a weekly pass on Friday, it's for the next week.

Not the answer you're looking for? Browse other questions tagged buses planning paris ratp or ask your own question.

13
Is it safe to stay outside the Boulevard Périphérique in Paris?
8
Ticket for a day trip by train and bus in Skåne
3
Paris and Riviera - July/August 2015 By Train
2
Is there a list of Greyhound partner bus carriers?
5
Public transport options between Paris and EuroDisney
4
Long-distance bus tickets with overnight stops
3
How to find bus schedules from Jasper, Alberta
11
How can I get information about bus lines between towns within Poland?
5
Bratislava (airport) to Budapest
25
How to understand quality of Google Maps transport info in advance?