May a hotel provide accommodation for fewer people than booked?

I booked a room in a hotel in Vienna for 3 people (2 adults and 1 child - 8 years old). I received an email from Agoda.com that confirms these details. The hotel sent me an email confirmation too, but the room reserved is for 2 adults. I have contacted them to correct the error and they refuse to deal with the issue. They insist that the room I booked is for 2 people only. I refered the matter to Agoda.com. Their response is this:

Please be advised that we already negotiated with the hotel and we were told that your room can only have either 1 double bed or 2 single beds. If you will need and ask for an extra bed that will cost you extra charges that will be collected by the hotel. If you need to request an additional bed, you can contact the hotel directly or request it upon arrival.

I am extremely frustrated by this situation. They have charged me for 3 people yet they are not providing a room that can accommodate my family.

The booking is non-refundable according to the Agoda.com website.

Any advice as to what I can do to resolve this?

You have an issue with Agoda, not with the hotel. Agoda sold you accomodation for 3 and you have confirmation for that. Whatever the agreements between Agoda and the hotel are*, is not your business.

Disclaimer first:
If the situation was as in the example in jpatokal's answer and that was shown to you when booking, you have no leg to stand on.**

As suggested in JJJ's answer you should fight this out with Agoda's customer's support one way or the other. You should not have an argument with the hotel.
Agoda is the company that sold you something you are not receiving, so it is up to them to resolve it. In some countries this a legal requirement, but I'm afraid that Agoda, being an international website, probably has all kinds of disclaimers in their conditions.

If you cannot get this resolved with Agoda, what's left is contacting the hotel directly, explaining that Agoda screwed up, and doing a request if they can someway help you accomodating the child.
If they are willing, I would suggest accepting any offer from them, even if it includes some additional payment, and thanking them for their assistance.

And if you cannot get this resolved with Agoda, in this age of social media, I would not object to a little public shaming and some stiff negative reviews. But with facts.

Note that your question title May a hotel provide accommodation for fewer people than booked? is a bit misleading because it is not the hotel's 'fault'.

* That's exactly what Agoda is doing in their response to you after contacting the hotel: they try to move responsibility to the hotel. JJJ's answer is also going in that direction, that's why I wrote a new one.

** You write I received an email from Agoda.com that confirms these details but we can't see that email. That text should be in your question.

TL;DR: The hotel has provided what you paid for. Sorry.

There are two separate but related things here:

Both are typically made clear in the small print, such as this example from the Doha Marriott Qatar: 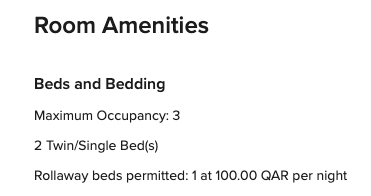 Your case is the same as above: it's a room which allows 3 people, but only has bedding for two. For parents with young children, this is often fine, since the baby can sleep in the same bed or they can bring along a travel cot. However, this is less realistic with an 8-year-old, so you're best off paying for the extra bed.

What the other answers seem to overlook is that you more than likely paid for this with a credit card. Agoda can say it's non-refundable all they like, but they can't keep you from disputing the charge with your credit card.

You've paid for a room for 3 people. Agoda has made plain it will not be delivering that. Therefore, the charge is clearly disputable. So:

I am extremely frustrated by this situation. They have charged my for 3 people yet they are not providing a room that can accommodate my family.

This really depends on the way it was advertised. In my experience, the listings on Agoda include the room composition in terms of beds / sleeping sofas / other sleeping facilities. If you are required to pay for extra beds, that's normally stated when selecting your room.

I've also had some problems with rooms booked via Agoda (a few times in over a hundred bookings). Most of the time I could resolve it via their customer support (mostly via email, one time by calling), even to the extent where everything in the area was fully booked (some national holiday) and we had to drive +-30 km to get a much more expensive accommodation for the day.

My advice would be to call Agoda's customer's support, but don't expect them to have much influence with this accommodation. If it's hotel policy then Agoda (or any other of those booking sites) probably won't get much done there. Instead, they may help you find alternative accommodation, help you search and be able to cancel your booking without charging as much or anything.

I've found that these booking companies provide hotels with a lot of business. Since they control payment and bring in a lot of cash for the hotels, they can play a bit with that without getting much backlash from the hotels (they want to stay on good terms with the customer providers). They cannot control what happens at the hotel (short of calling the reception, which they may do), so that's really where to stop being able to assist.

Parents are often happy to share a bed with a child; a young child may even be more comfortable sleeping with a parent than alone in a strange place.

When you booked the room, you booked a room with a specific number of beds, and said that three people would be staying there. It is up to the customer to make sure that the type of room they book suits their needs.

Cots or extra rollaway beds are not a guaranteed amenity, nor necessarily free -- even hotels that have them often have a limited number and can run out, and many rooms are not big enough to accommodate them.

If the booking service booked a room that did not match your clearly stated requirements, that is between you and them, not you and the hotel. (A good hotel will try to fix problems for customers, but may simply not have three-bed rooms available, as that is not a common arrangement.)

Assuming you read the details at the time of booking correctly, it sounds like there has been a breach of contract on the part of Agoda and/or the hotel. Consequently, the "non-refundable" rule should, in principle, be unenforcable. The simplest solution, then, is to cancel the booking without penalty (obviously, if rooms have since become more expensive, you may feel this is insufficient). Do this swiftly (ideally within 24 hours), to avoid anybody interpreting lack of immediate action as implicit acceptance of the revised terms. Be militant and insist on your right to cancel without being charged (if Agoda and/or the hotel will not agree to this, refuse to pay and dispute any payments already taken -- many banks and credit cards offer mechanisms to dispute a payment without going to court over it, although the other party can, in theory, try and sue you).

Personal anecdote: I once made a non-refundable booking directly with a hotel in which I used a promotion code for free breakfast (the code was given to me by the hotel after my having stayed there before); the website accepted the code and confirmed there would be free breakfast, so I proceeded to book; however, after booking, the confirmation message said there was no breakfast; I immediately wrote to the hotel and asked for the error to be corrected; the hotel replied that the promotion was available only in the winter months; I asked to cancel without penalty since it was a material change of terms from what the website had articulated; the hotel then said that they would add free breakfast as a "goodwill" gesture.

Not the answer you're looking for? Browse other questions tagged bookings hotels vienna agoda or ask your own question.

29
Why do hotel booking sites ask for the number of people? Does it matter how many I say?
21
Are "adults-only" hotels the same as love motels?
1
Can the person who books a hotel ask hotel for information regarding guests etc?
2
Booked hotel, but never asked for payment information
2
Booked hotel through booking.com and now want to cancel but they have card details!
5
Cancellation fee for a hotel in Austria booked via phone call
1
Can a hotel charge me for reservations a year later if I signed up on a waiting list?
4
How can I find hotels in a given area that rent units with a separate bedroom?