On a recent full flight there was no room overhead for my standard cabin bag which had even been given an approved sticker when I checked my baggage in. The FA instructed me to put it under the seat in front from where it completely blocked the seat aisle. I complained that this wasnt safe and was told it was 'normal'. Well, not in my 50 plus years of flying nor according to the airlines own safety card. There were many other seat aisles similarly blocked.

What are the applicable safety regulations?

Should I notify any oversight organization, and if so which one? The carrier was Lufhansa, out of LHR.

The phrase "many other seat aisles" suggests the OP is referring to the space between seat rows. – David

Yes, David, that's what I meant.

My concern is that if there are these very public breaches of Lufthansas own rules what is going on behind the scenes?

By way of example of what is normally required, the US FAA Advisory Circular Carry-On Baggage which provides information on how to comply with carry-on baggage regulations (AC121-29A, page 2, Par5) says that the FAA could approve a carry-on baggage program that requires baggage stowed under a seat not to project beyond the overhanging seat. It says ... ensure that each piece of baggage fits under the seat such that no part of the bag protrudes bey0nd the fully upright seat back or causes obstruction to passenger movement to, from, or across the aisle'.

As another example, the Lufthansa Terms and Conditions - General Conditions of Carriage state at 8.7.1 Baggage you carry onto the aircraft must fit under the seat in front of you ... The airlines own diagrams and even the tags attached to carry on bags show such a bag entirely under (ie NOT sticking out) the seat as the FAA prescription above.

National aviation safety agencies such as the FAA or CASA (Australia, with whom I have discussed this issue) have no authority over other nation's airlines. Thus a complaint to the UK CAA cannot be dealt with by it and has been referred to the German Luftfahrt-Bundesamt section responsible airline licensing and cabin-crew inspection.

Following are some pictures from the flight in question: 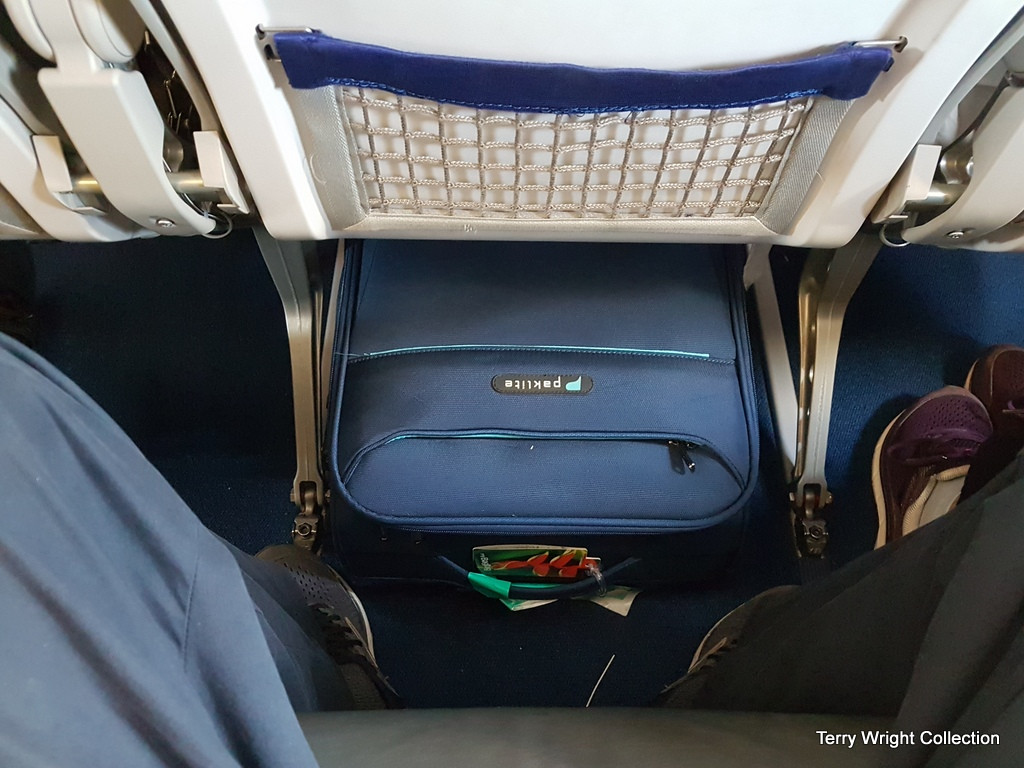 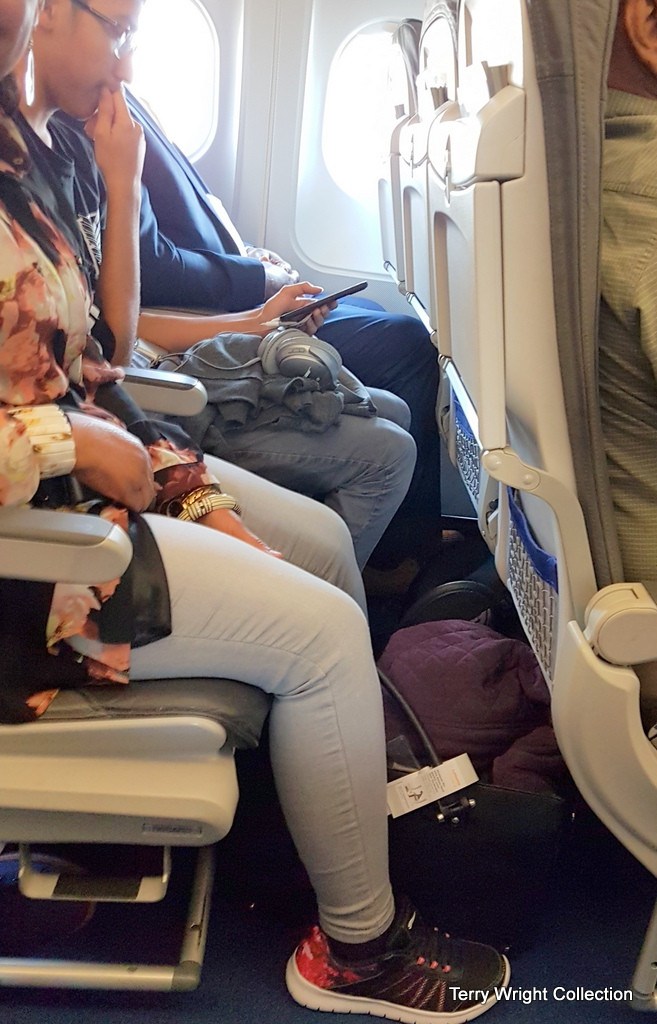 You are right to ask about safety-related issues, and of course a passenger has every right to inquire about or report such things, though I would first seek clarification from the cabin crew or airline.

That said, most of the "outrageous" things you'll see (wether live or on the internet), are actually perfectly safe, as for example fixing minor problems with speed tape

As for your question, it is impossible to answer what the regulations are on your flight without knowing the exact procedures of that particular airline for that particular type of aircraft. So unless some A320-Lufthansa cabin crew pitches in, we'll probably not get a definitive answer.

In their passenger-facing documentation Lufthansa suggest to put laptop bags and such under the seat, and trolley luggage into the bins. But that doesn't mean their internal rules don't allow larger items.

The FAA has some information on cabin safety, which gives some insights into the general guidelines. These will probably be the same, or very similar, in Europe. Note that they refer several times to the "airlines carry-on baggage program", indicating that the airline will have to provide the specifics.

It is a bit moot to discuss the safety card: They are not meant to be a exact diagram on the maximum dimensions of items under the seat.

A note on terminology: The "aisle" is the walkway in the middle of the plane. It does not refer to rows of seats or the space between them - this was confusing in the initial question and needs to be understood when reading the safety regulations.

Even according to your explanation, the aisle of the aircraft was never blocked.

The FAA guide gives some insight in what safe: The baggage must be stowed in designated places, not obstruct emergency equipment and not obstruct movement through, or to and from, the aisle, and the luggage must not move around.

Can they do that?

Part of your question seems to be wether it is likely that the cabin crew of a major European airline would regularly flaunt safety regulations. The answer is, most likely, no.

The airline industry is highly regulated, and crews are regularly and specifically trained on this. While some may be more relaxed about things, any flight attendant who intentionally goes against safety regulations risks to be fired, or worse, especially when doing so in a public, obvious way. And no airline would ever officially permit such conduct.

So in your situation it seems they had much to lose, but apparently nothing to gain, by going against regulations.

To me it seems more that the crew prioritised an on-time departure over the comfort of (some) passengers.

Not the answer you're looking for? Browse other questions tagged safety aircraft or ask your own question.

5
Unsafe seats on a Boeing 777?
36
Is sleeping on the floor in planes allowed, and if not, why not?
4
Airplane Seats and overhead storage
11
Flight path over a war zone, such as Syria and Iraq in 2015
1
Has the flight security briefing text changed?
8
Personal item size: how large is the space under a seat?
29
Why do airlines not have you put your bag underneath your own seat?
40
Passenger rights during a flight
66
What Happens when Passenger Refuses to Fly Boeing 737 Max?