How can I legally visit the United States Minor Outlying Islands in the Pacific?

The United States Minor Outlying Islands (USMOI) are nine islands or groups thereof, eight of which are remote outposts in the Pacific Ocean with no permanent residents (the other is in the Caribbean). 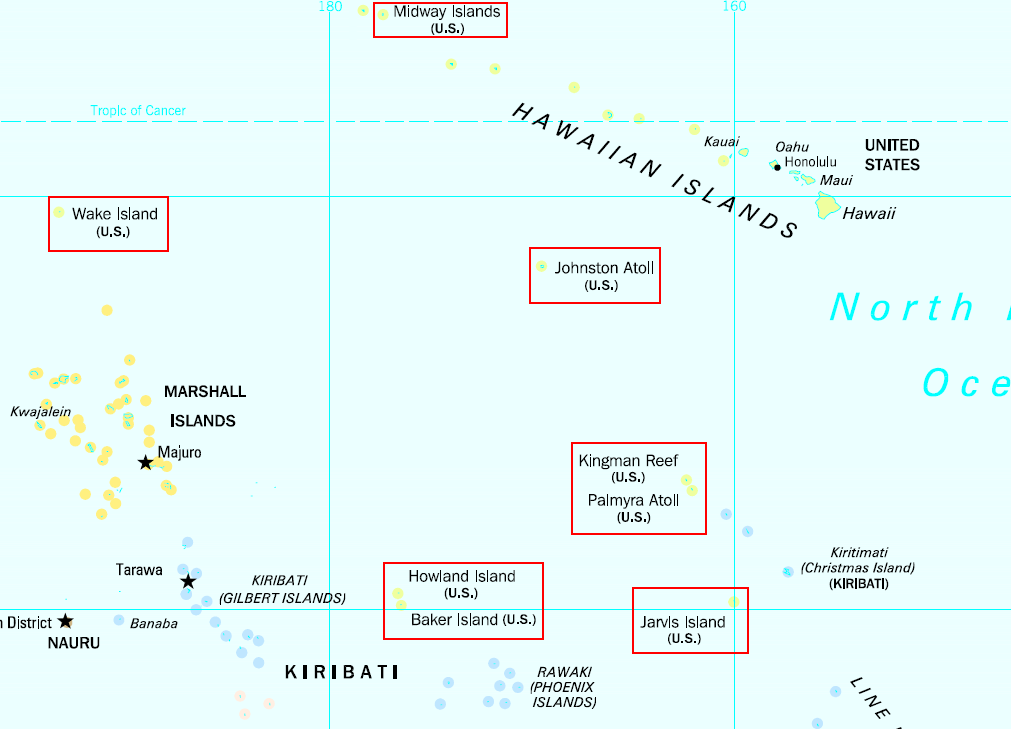 Being a fan of remote places with visible human history, I am intrigued by these Pacific islands. I know that once I got to one the charm would likely wear off in short order, but one can dream.

Given that I am a citizen of the United States, what is the easiest legal way for me to visit each of these islands? For the purposes of this question, I am willing and able to join the military, get a job with the Fish and Wildlife Service, sail/fly on a private boat/aircraft, etc.

(Note: There are a couple similar questions on this site, but none specifically deals with the particularities of the USMOI.)

I can answer for Palmyra Atoll, as I happend to have come across this recently.

From time to time, the US Fish and Wildlife Service seeks volunteers to work on Palmyra Atoll. The last call for volunteers went out in May, and it's a bit of a commitment: "Volunteers will be expected to work 8 hours a day 6/days per week for the entire ~3-4 months on Palmyra, without any chance of leaving the atoll." So you could look out for future volunteer opportunities, if that appeals to you.

If you'd like a shorter trip, FWS describes the methods for authorized visits:

There are four ways the public may gain access to the refuge:

Donating a bunch of money to the Nature Conservancy could do the trick, and I'm sure their development department would be happy to discuss the amounts required. Or you could arrange a boat to take you out there (or learn to sail and get your own boat). That page further describes the requirements for private visits (limited to 7 days); you'd have to get in touch with FWS staff to determine when they're able to accommodate a visit.

A final note from that NPR story:

And a tip — a final field note — for those who do get to the island: Before you go to bed, shake out the sheets. Often, brown spiders the size of silver dollars live in the folds of the bed spreads.

The richer hobbyists will sponsor or join a DX-pedition to some of the more exotic, uninhabited, locations that are rarely heard on the air. Inhabited places already have Amateur radio operators, as it is widely accepted as a hobby or public service. Often these DX-peditions are timed to coincide with specific, well known yearly contests where they compete at generating the most ham radio contacts or the highest contest score.

An argument that is often put forward when advocating for permits, etc. is that these expeditions (and the related contests) have value as emergency preparedness training exercises. Organizing an effort to take equipment, wire, antennas, portable or improvised towers, and portable power generators out into the middle of nowhere with no infrastructure and set up contact with the world can yield some insights into readiness and operations after a hurricane, earthquake, or other event in civilized areas when ordinary communications has been disrupted. Those participating in a contest from their comfy air-conditioned home may find special categories or extra points for using low power to make contacts or for disconnecting from commercial electricity and using non-polluting solar/natural power sources. The overlap with actual emergency ops isn't perfect, of course, but maybe it doesn't need to be.

As for these specific islands, I found previous efforts by Googling a location+" dxpedition"

Reading through these stories, when money is discussed you will find most of the financing comes from the groups themselves. Although it is possible that some hobbyists may include a few dollars with their request for a QSL card, and some of these efforts yield tens of thousands of contacts, not everyone wants a card. Also, most countries' Amateur Radio regulations prohibit soliciting for funds directly on the air.

I would imagine that enough resources, skills, money, and networking would yield a chance to be part of a group visiting one of these places.

Not the answer you're looking for? Browse other questions tagged usa transportation islands adventure remote-locations or ask your own question.

14
How could I explore the Rock Islands of Palau?
6
Visiting a National Park in the United States
27
Is it possible to legally visit uninhabited islands in the Pacific for a couple of days/weeks like Robinson Crusoe
10
How to travel between the islands of Cape Verde?
51
How can I visit 'Null Island'?
0
US Immigration - VWP/ESTA eligible?
4
Caribbean Islands or adjacent to the sea? Onward ticket ESTA requirements!