I'm taking a train from Germany to Russia and back. In both directions, the train is direct at least between Poland and Moscow. On the Belarus transit visa application form, question 19 is:

What do I write here? On the way east the train arrives at Brest at around 21:15 and departs between Orsha and Smolenks between 05:30 the following day. On the way west the train crosses between Smolensk and Orsha around 20:30 and then leaves at Brest around 05:10. I'll be in Belarus on four days in total. Does that mean I should write 4 for на тэрмін знаходжання? Or should it correspond to my Russian visa (plus two days), such that e.g. westbound transit on September 1 and eastbound transit on September 20 would be a transit visa valid for 20 days? I find the idea of a transit visa for 20 days confusing because transit doesn't take 20 days — it takes 1 or 2, in each direction...

Be aware that your route might not be possible at all, at least not legally. Foreigners are not allowed to cross the border between Belarus and Russia by land even if they hold visas for both countries. The reason for this is the lack of border checkpoints between the two countries. With no border formalities on the train, you, technically, enter Russia illegally. In theory, you might enter Russia and return to Belarus without any Russian official checking your documents.

In practice, experiences may be different and there are people having done this trip without problems. The information I received from the Belarusian embassy (May 2019) is the following:

Taking practice into account there are no problems for traveling from Russia to Belarus with international train after entering Russia via international checkpoint of the Russian Federation. Problems arise when foreign citizens try to cross border of the Russian Federation from Belarus by land coach (car, bus, train). Russian border guards in these cases deny exiting Russia and sent to Russia–Latvia border.

Nevertheless, it is suggested to check this with Consular section of the Embassy of Russian Federation when submitting documents for Russian visa.

I suggest clarifying the current situation with your closest Belarusian embassy.

As to your question, the Belarusian MFA defines a transit visa on their homepage like this:

transit visa (type B) with the right of single, double or multiple transit through the territory of the Republic of Belarus within 2 days;

To me, that sounds like you would need two transit visas in which case a short-term (type C) visa might be the better choice.

However, I strongly suggest reaching out to the Belarusian embassy with your exact situation and itinerary. They can probably provide more detailled (and up-to-date) answers. 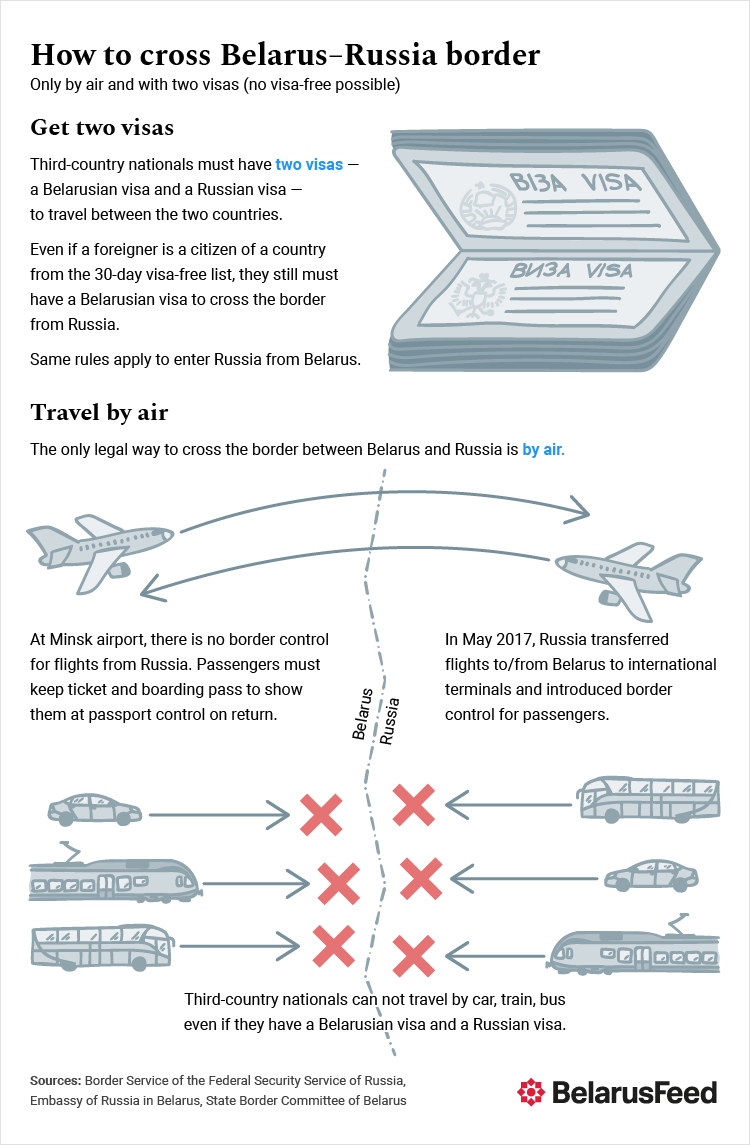 The company Pul Express specialises in invitations and visas for travel to Russia, Belarus, and Kazakhstan. They have advised me:

I'm aware that formally, travellers cannot take the train from Belarus to Russia, but according to several online sources, direct trains from the EU are allowed and neither seat61 nor realrussia has any report of any traveller being taken off this train.

Not the answer you're looking for? Browse other questions tagged visas trains transit-visas russia belarus or ask your own question.

4
Can I travel to Belarus or Ukraine with a valid Russian visa?
4
Can I leave the station with a Belarus transit visa?
12
How to apply for a Belarus tourist visa without booking a hotel?
14
Valid Russian Visa Required when Entering Belarus?
10
Visa to Belarus when traveling Belarus-Russia-Belarus
10
Is Emirates' 96-hour visa 4 calendar days or exactly 96 hours from entry to exit?
3
Visas required for Irish passport holder travelling to Minsk via Moscow
5
Is the Belarus-Russia visa recognition into force yet, or do I still need a Belarus transit visa?