Almaty to Urumqi by connecting train (via Altynkol and Khorgas)

Besides the direct train which runs twice a week (and, unfortunately, doesn't fit our planned schedule) what other options do we have to make the journey from Almaty to Urumqi by train/bus within a day/24 hours? We have a flight out of Urumqi on the 27th of October and would like to arrive the day (night) before to give us enough buffer.

I plan to split the journey into two parts, first, taking a Kazakh train from Almaty to the border at Khorgas and then a Chinese train from Khorgas (on the Chinese side it is called Huoerguosi) to Urumqi.

I have researched a few options but struggle to confirm their actual availability. First, there's Lonely Planet citing two daily connections between Almaty and Khorgas:

A similar option (as pointed out by the Lonely Planet) is to take the train to Khorgas but then continue on a bus or taxi to Yining. How frequently do these busses run or how easy is it to get a taxi? How much would it cost and most importantly, how much time would we need to plan to make our way from the border to Yining, i.e. which onward train to Urumqi can we realistically aim for?

If these timings are accurate how can we bridge the gap between Altynkol and Khorgas/Yining? Is there transportation available and how much time do we need to plan for crossing the border? I didn't find any information about potential border closures but maybe someone can share their experience crossing at Khorgas on a weekend.

Lastly, for further research, could anyone confirm the Kazakh and Chinese names for Khorgas/Khorgos/Korgas/Qorǵas?

This question covers the same route but I am explicitly asking for a different connection.

Update I found the bus from Almaty to Urumqi on Sayran's webpage. There's a daily connection at 7:10 (if I click on the details it says 7:00). There's not as much information as for other connections but it appears as the bus stops at Khorgos (I don't know which side of the border though, and whether it's possible to get out and continue by train from there). It's a 24 hours ride for 16000 tenge. 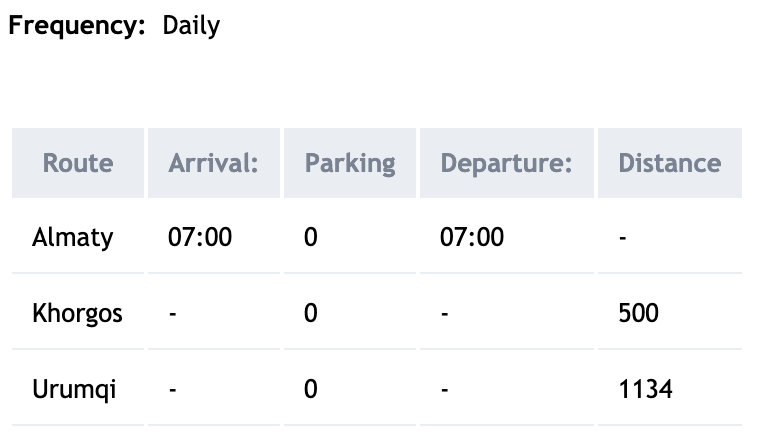 There's also a connection from Almaty to Zharkent (2000 tenge) every other day at 9:20 (again the detailed information mentions 9 am sharp): 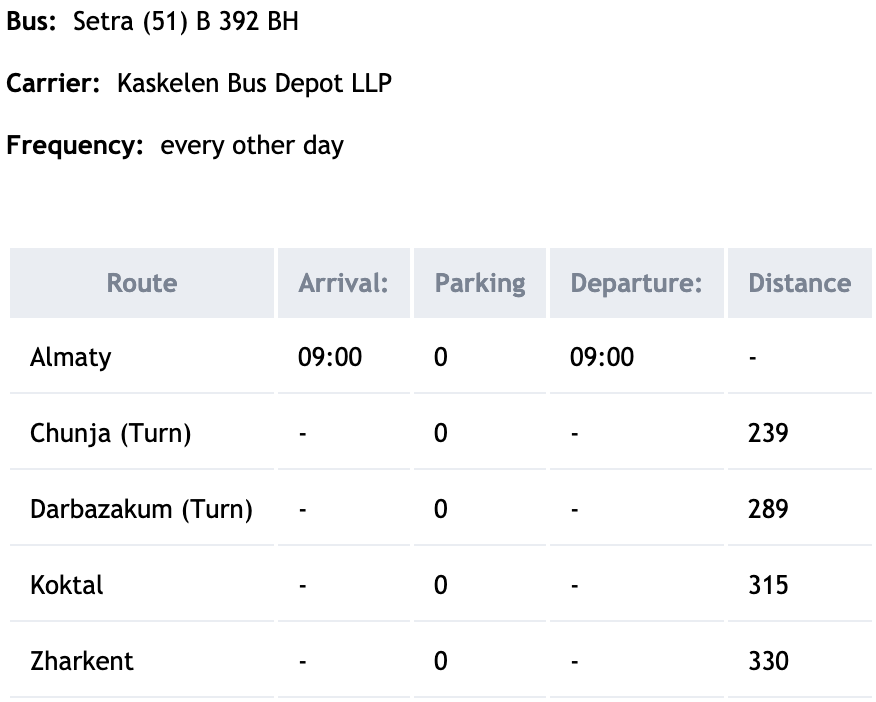 [...] Zharkent, from where a bus to China leaves twice a day, while minibuses leave when full (average wait 2-3 hours, less in weekend).

There's also a report about someone making the trip from Almaty to Yining by bus.

First of all, the Khorgos border is no longer operational:

Since late 2018, the former Khorgos border crossing is no longer active and now only functions as a Special Economic Zone with discount shopping and tacky tourist attractions. The new border is called Nur Zholy and lies a few kilometers south of Khorgos. It is not yet marked on the map: follow the main new highway from Almaty and you will get there.

The border opens at 10:30. The border is also quick to cross with freight vehicles taking less than 40 minutes and the automobile check point is quite sophisticated:

From Almaty to Nur Zholy there is a bus:

I went to the border directly with a taxi: 35 yuan. After exiting China, there is a Kazakh bus that goes STRAIGHT to Almaty (you must buy the ticket on the spot because the bus starts in the no man's land, this bus never touchs Chinese territory) It is then possible to skip Zharkent!! Price of the bus: 100yuan (I feel I could have bargained)

And then to get to Urumqi:

These guys arrived to Huo er guo si' and went to the city bus station. They took a bus which drove them to the Chinese border, and then crossed to Zharkent.

In my case, I went to the border directly with a taxi: 35 yuan.

the other is 103Ц Almaty — Urumqi which leaves at 09:45 AM on Monday and goes for 21 hours. By the description the latter seems to be much more comfortable.

Both leave from Almaty 2 and pass Almaty 1 (the listed time is Almaty 1).

Obviously you can take either one with a break in the middle. Or trace their route and make a switch to a different train in between.

Not the answer you're looking for? Browse other questions tagged trains china borders kazakhstan or ask your own question.

16
Board Chinese train at a different station (on-route)
7
How to get from Kazakhstan to Urumqi?

7
Is there a direct train from Bucharest to Istanbul?
8
Are there overnight bus from Chiang Mai to Chiang Khong?
11
Is there an ATM at the Si Phan Don/Stung Treng border?
2
Dual citizenship (US and Ecuador) travel to China
7
How to get from Kazakhstan to Urumqi?
3
Can I transit through Guangzhou into Beijing from Melbourne to Almaty and still get visa-free transit?
5
border formalities when entering China from Hong Kong by train
14
Are these Deutsche Bahn train seats side-by-side?
9
Train from EU to Kaliningrad