How should I ask for a "pint" in countries that use metric?

This is perhaps a silly question, but I've found that when I've been abroad (and let's be realistic, this probably applies to every country but the US and the UK), I often want a drink from a pub or bar. In the past usually out of habit I would tend to ask for a pint, and indeed would receive half a litre as I would expect. But I always end up wondering afterwards if it's the right thing to say — it kind of seems like a pretty stereotypical "clueless insensitive tourist" thing to say (not that a system of measurement is anything to be sensitive about, but you get my meaning I hope).

Would people in countries which use metric measurements for beer and cider at a bar normally ask for half a litre or 500ml, or would they use some word which more-or-less translates to pint (even when they don't expect to receive a literal old-units pint)? Should I continue to say pint, or would some other term be better for clarity (bearing in mind I don't usually speak the local language in most cases so I would be asking in English)?

I don't think you'll find a completely universal approach that fits all cultures perfectly. However, in the continental beer cultures I'm the most familiar with (Dutch, German, Czech, Austrian, …), there's typically one dominant "size" of a beer that everyone gets. What exactly that means differs a lot by country or region. Asking for "a beer" in Prague will get you half a liter, while doing the same in Düsseldorf will only yield a ridiculously tiny glass.

Apart from that, "large beer"/"small beer" seems to be the usual way to distinguish between different sizes. But again, what is a "small beer" in Czechia can often be a "large beer" in the Netherlands.

Asking for "a pint" definitely marks you out as 'a tourist who isn't trying to integrate much', but probably not much more so than ordering in English. Bar staff who understand English will understand that you want something like 0.5L of beer and presumably present you with the closest they offer.

That said, learning how to order a beer in the local language (and even being prepared to do so in the standard local quantity) is probably not too hard and would be appreciated.

As others have said, drinking establishments will be well-versed in knowing what various foreign customers are talking about when ordering. But, just ask them how you'd order a "pint" in their local language, and let them explain it to you.

This does a few things...

1) it shows them that you have an interest in their culture and customs, rather then you being a jerk tourist that expects the locals to accomodate yours

2) the locals are way more familiar with slang and such they use, so you could learn interesting ways to order drinks that folks on the internet may not even know

3) it can strike up a convo with the locals, and before you know it they're giving you tips on great places to go check out (eg: a great local hole-in-the-wall place for good local food instead of tourist trap food, or a great site-seeing trip, or some other off-the-beaten-path thing that would be really cool to do that other tourists wouldn't know about, b/c they didn't go out of their way to be friendly to a local and try to fit in.)

Part of being a good tourist is to just let the locals teach you by asking them for help. Locals love to help folks out, because they love others taking an active interest in their culture, and it sparks that desire in human beings to help others.

As other answers note, it varies, but by and large in the Eastern European countries I've visited you can order a "large" or "small" beer and the sizes will usually be near 0.5l and 0.33l respectively.

In Latvia, for example, it is frequently also said "zero three" and "zero five" in Latvian, as in "zero five Tērvetes" for a popular brand of beer here. But I suspect many would not understand at first, if the volume was said in English, as tourists most usually go for "large" or "small".

That said, the volumes of drinks in pubs are not preset, and in some places (especially, but not only tourist traps) you could get served 0.4l for a large beer and whatever is less, for a small one. In other places the small beer can be 0.4l. Nevertheless by and large it will be 0.33 and 0.5, and usually only two glass sizes available, sometimes even only one (the 0.5 one).

I've found that an extremely effective solution to asking for a beer in different countries is to use the universal language of saying "a beer, please" (in the local lingo) while simultaneously showing them with your hands (or fingers) roughly what size you're wanting.

Or else you'll end up with an embarrassingly small beer, like the chap below. 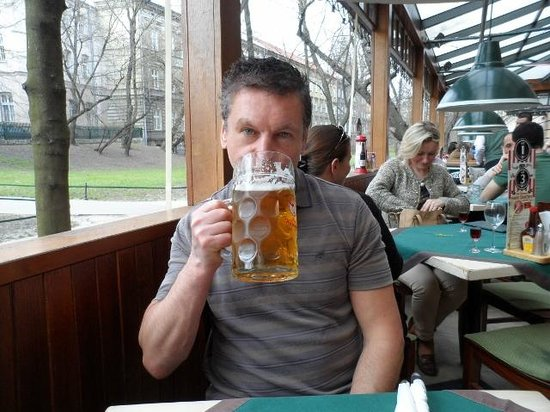 Wikipedia has the following table on capacity and the terms used in different countries:

I'll add a [disputed] tag in the table above if others make a credible case in the comments below.

Comments on the question, too good to lose, so into a community wiki:

You should probably be country specific. It is called differently (and “pint” is different volume) even in different states of Australia: ournakedaustralia.com.au/drink-australian-beer-sizes – Jay Random Jul 5 at 9:21

Most places that regularly serve tourists will understand the english word pint as a measure for draft beer. In many countries that equates to a larger than normal serving size, except maybe in Germany's beer halls where that is a small glass compared to the normal 1 L Maß – HBruijn Jul 5 at 9:26

Yes, this is country-specific. You might ask for half a litre or for a 'large' beer might be the local way to request the same quantity. – Martin Jul 5 at 9:31

In France, the traditional serving in a bar is un demi (which actually is 25 cl). A 50 cl glass can be asked as une pinte (with French accent), une chope, un baron or un distingué. – audionuma Jul 5 at 14:38

In Sweden just ask for "en stor stark". A big strong one. It will likely be between 400 and 500 ml. Unless it is some special bar or festivity you won't get bigger than that. – mathreadler Jul 5 at 17:29

In warmer countries only tourists order large beers. The reason is that it's so hot that if you order a pint then it'll lose its chill before you've had time to drink half of it. Here, we order half the amount but twice as frequently :-) – Aaron F 2 days ago

In Canada, you can order a pint (in French, une pinte). Though as @choster mentioned, the size might vary. I think I've even seen European import glasses which are 500ml. – wjandrea yesterday

@njzk2 Hmm, other people have mentioned that in this thread, but it's not correct. Dieu de ciel for example lists a pinte as 16oz, and in my experience a chopine is only used for dry goods like berries, tomatoes, etc. (I live in Montreal btw.) But on the other hand, all the official resources I've found agree with you. – wjandrea yesterday

I don't drink, but on the odd occasion I've been to a pub with friends they usually just ask for a "four-X gold". It appears to come in single size of glass bottle. – Clonkex 12 hours ago

@AaronF This is fine. Having grown up in the UK I actually prefer beer at room temperature. XD – Vality 41 mins ago

As others have said, it depends on the country. In Spain the word "pinta" (pint) has become really popular in the last few years, so even in my grandparents' village they will understand it. Some bars even actively promote it. Otherwise you can ask for "una jarra" (a jar).

However, in Spain is very common for bars to give you some free food with your drinks, so generally speaking it is a better idea to order several small beers ("una caña" or "un tubo") than a big one, that way you get more food.

The other answers already provided good takes on the aspect of simply ordering "a beer", as in "a beer of the usual size". If you are fine with whatever size of glass that may be, this can be the best option.

However, I want to add an aspect that works really well if you aren't sure what the "usual size" is and you want a certain size: Have a look at the menu. Often, you will find prices for beers in different sizes (e.g. 0.33l and 0.5l). If there are only two sizes, you can generally just order a small or large beer.

Some styles of beer have a preferred size, e.g. Kölsch is mostly served in 0.2l glasses (but sometimes available in 0.3l), while wheat beer is commonly served in 0.5l (but sometimes available in 0.33l). If you want the standard size and additionally qualify it with a size ("a small Kölsch please", or "a large wheat"), that would obviously be redundant and might get you a funny look but shouldn't offend anyone.

Bartenders are not ignorant

Since a pint equals 568.261ml, if you ask for a pint in whatever language to a bartender who barely knows their profession, they are going to serve you the closest size to 600ml, depending on the sizes they have available in the shop.

Depending on the country you are visiting and their drinking habits, they are likely to serve you a glass of 500ml or at least 400ml, regardless they call it medium or small.

Most of the answers seem to concern Western countries. In South Korea, beer is measured in cubic centimeters. So when ordering a pint, you would ask for 500cc. In Western-style pubs, however, the default size seems to be a pint, so you probably don't need to specify.

I don't know about other languages, but in Spain there are different words for different sizes of beer and you have to be specific if you want something specific. If you are ambiguous, you might just have to take what you are given. As indicated in the picture below, 'una cerveza' could mean anything.

You can ask for 'una pinta' for a pint, and if you want it as small as they will sell it, you just ask for 'una caña'. 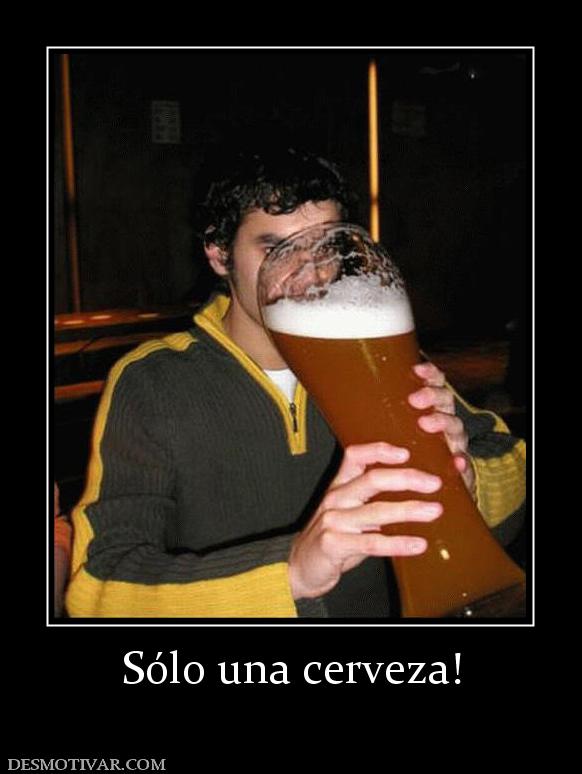 Not the answer you're looking for? Browse other questions tagged language-barrier alcohol or ask your own question.

25
How to know "your number" for a machine haircut in a foreign country?
18
How to ask drivers not to take me to the bus station when hitchhiking in Thailand?
38
How to make sure that you get off at the correct bus stop in Thailand?
7
How to request for translator at Australian Border Control in advance?
57
How to use public transport in Russia with limited knowledge of Russian?
15
How to find breweries in France that actually make their own beer?
27
How to I prove my legal age so that I can drink in New Zealand?
24
How do I ask Japanese restaurants in writing not to serve me any meat?
14
How to politely indicate that you only speak English and would like to continue in it?