Is it allowed to photograph airport customs signs from the baggage claim area?

It's certainly true that there are often areas in airports (including Norwegian airports) where photography is forbidden -- most frequently in the security control zone. Here's an example from Sandefjord Airport in Torp, near Oslo (source): 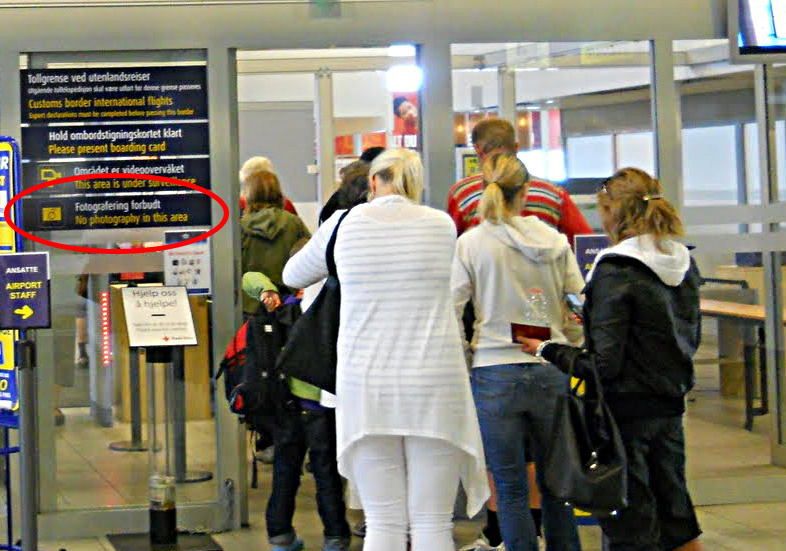 As you can see, there's a sign at the entrance clearly indicating the prohibition in Norwegian and English (circled in red). That makes it fairly clear that you shouldn't photograph within areas for which that sign is displayed. It's also a strong indication that photography is permitted in parts of the airport where this sign is not displayed – otherwise the sign would be at the entrance of the airport itself. Provided you're not photographing within one of those restricted areas, there's no cause for concern. In particular, the baggage claim is not usually restricted in this way, even if the customs signs are visible from it.

Even if any member of staff does accost you for photography in a non-restricted part of the airport (as in this question), it's very unlikely that they will do anything worse than asking you to delete the photograph.

As a side note: for Oslo airport (which, like Bergen Airport, is operated by Avinor), there are admittedly some rather draconian-looking rules governing photography:

Anyone who wants to film or photograph at Oslo Airport must send a brief e-mail to kommunikasjon@avinor.no with information about who you are, what you want to shoot / photograph, what is the purpose of your request and the context in which it will be used.

However, from the context I think that it's fairly clear that they're talking about professional, commercial photography here. Oslo Airport averages around 80,000 passengers a day, most of them with a phone camera in their pockets, so trying to restrict photography outside of a few small, tightly-controlled zones would be unfeasible in any case.

This is a little peripheral to my answer, but I am adding it at the request of a commenter below.

In Norwegian law, prohibition of photography in airports is enforceable under regulation LOV-2005-05-20-28, which makes it an offence, punishable by a fine, to remain on somebody’s property after they have asked you to leave1. This means that a property owner can make admittance conditional on following certain rules (such as not taking photographs in specified areas), and ask you to leave if you break those rules. Provided that you leave the airport when asked, you have not committed a legal offence – but if you were planning to fly out, you will of course be unable to board your flight. Avinor (who own and operate most of Norway's commercial airports) could also ban you permanently from all their airports, making future travel to and from Norway less convenient, but that’s a theoretical worst-case scenario, and in my opinion very unlikely to happen if you simply took a couple of snapshots without realizing that you were in a photography-restricted area.

For security areas such as the one in the photograph, things are more serious: photography at an airport security check is explicitly forbidden2 under regulation FOR-2003-03-05-283. In contrast to the more general case above (where you only break the law if you refuse to leave the airport), this means that you have committed an offence as soon as you take the photograph, and you can be arrested, charged, and convicted for that act alone. The law does not specify any fixed penalty for the offence; if you were convicted of it, it would be up to the judge to decide on the sentence. See Franko Aas (2004) and references therein for more details of Norwegian sentencing practices; as noted there: ‘When it comes to sentencing, Norwegian judges have fairly broad and unregulated discretionary powers. The Norwegian penal code does not have a general provision or a rule about the principles of sentencing, nor about which circumstances should be taken into account when judges determine the appropriate sentence.’

Not the answer you're looking for? Browse other questions tagged customs-and-immigration legal airports norway photography or ask your own question.

11
What rights to photography exist at UK airports?
4
Is it legal to take photos at the airport?

56
What rights do you have in China to appeal stuff being taken off you in transit?
4
When entering the EU, can one bag count for two people's duty free allowances?
60
Can Customs make me go back to return my electronic equipment or is it a scam?
28
Is it forbidden to enter the bag claim area through the arrivals gate? Why (not)?
11
What rights to photography exist at UK airports?
2
Are import duties supposed to be paid within the airport customs area itself?
5
Where to buy cigarettes? At the airport duty free or in local supermarket?
29
What happens to the garbage from a pre-customs side of an international airport?
1
Sydney Airport international airline transfer