Why do almost all international trains to Russia show as sold out?

Do summer trains to Russia from Poland, Germany, or France really sell out as soon as their booking opens (apparently 45 days before departure, but other sources say 60 days? I have a hard time booking a train ticket from Germany to Russia. Do they all get bought by agencies?

For example, Frankfurt-Moscow shows as sold out on 12 July, 19 July, 9 August, and only De Luxe Sleeping left on 26 July and 2 August (unavailable on 16, 23, or 30 August, probably because it's more than 60 days from today). Berlin-Moscow on 27 July or 3 August (43 and 50 days respectively from today, so not exactly a late booking) has only two sleeping places per car left: one for a disabled person and one for a person accompanying a disabled person:

Warsaw-Moscow for 10 August (57 days from today) shows 1 place available. Milano-Moscow shows as sold out for 4 August, but has a few places available for 11 August, which must have only just gone on sale.

Is there a problem with the online booking system, or do international trains to Russia apparently really get sold out as soon as tickets go on sale? Do they all get pre-booked by travel agencies?

Some trains are sold out on RZD but available on Polrail: 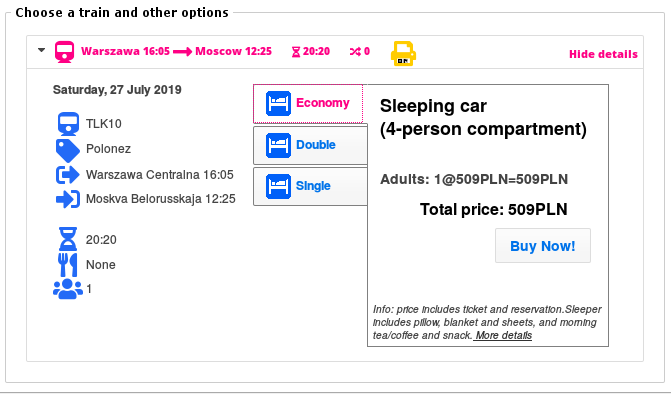 which seems to mean that only a limited number of tickets are available online via RZD for this train — so even when it shows as sold out there, there may still be tickets available elsewhere...

There are several things going on here:

Travel in July and August is popular; there are likely many Russians on vacation in Europe.

Specifically for the Paris-Frankfurt-Berlin-Moscow train, there appear to be track works in France in summer. Tickets between Paris and Berlin are not available beyond 15 August. When looking at the train Berlin-Moscow for 16 August, RZD reports:

And the arrivals and departures at Berlin Hbf show that the Moscow-Paris train is shortened between 5 July and 9 August and between 14 August and 6 September, running only as far west as Offenburg (westbound arrival Offenburg 03:51 or 04:56, eastbound departure 23:39 or 0:18). When searching through bahn.de / HAFAS the train shows up normally from Paris until 8 August, but not from 15 August, when HAFAS also shows it as running only from Offenburg: 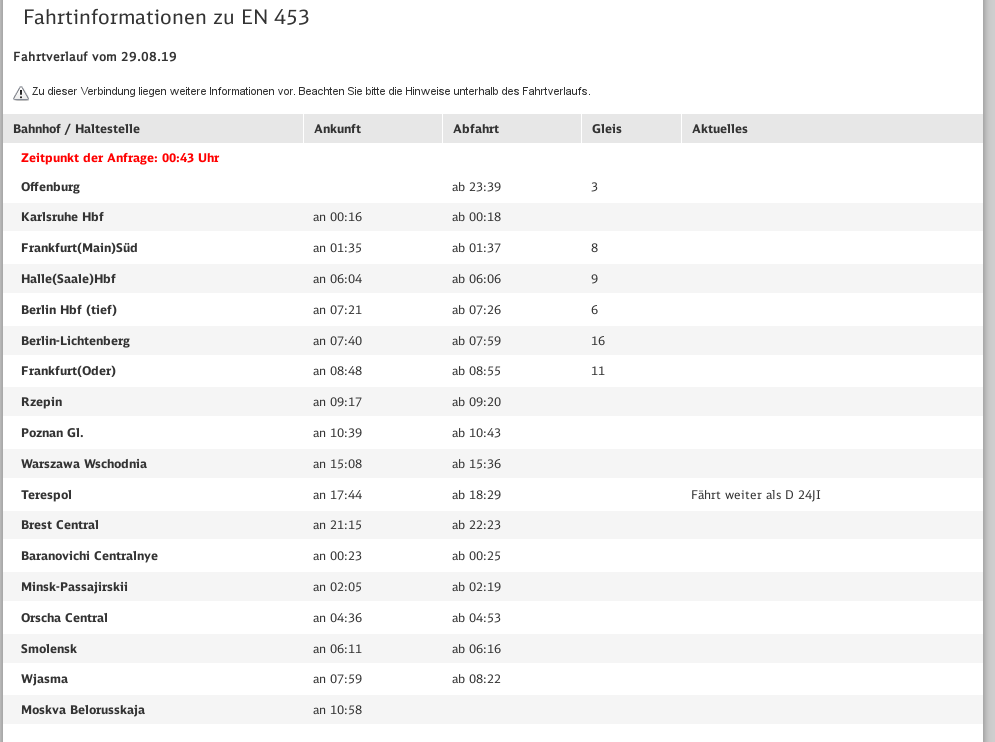 So it looks like there is something going on (I guess trackworks on France). The train may not be running to or from Paris on those dates at all (I've read before that the English language interface at RZD shows trains as "sold out" when they are unavailable for booking for any other reason, such as when searching too far into the future, so that is consistent), or even when it will, by the time RZD opens the Paris-Berlin section for booking the train may be sold out between Berlin and Moscow! So it looks like travellers in this period may need to travel on different trains to Berlin then get on the train to Moscow there.

Tickets available, but not (all) through RZD

For the Warszawa-Moscow train, there is yet another message from RZD:

which appears to mean that RZD only sells a limited number of tickets for this train. Indeed, as shown by the screenshots in the question, even when RZD reports a train as sold out, Polrail may still be able to sell tickets.

I have checked the departures for 2 August, 9 August, and 16 August again. When I checked those on 22 June (5 days ago), they all showed as sold out. Checking them again today (27 June), there are (in second class) 7 seats available on 2 August, as well as 43 on 9 August, 49 on 16 August, and 39 on 23 August. So it seems that some tickets are made available only later — perhaps extra carriages were added to trains that had sold out.

Traveling to or from Russia by train is neither time nor money efficient, what with the different gauge system and the lack of proper high speed rail infrastracture anywhere between Moscow and Brest.

You can easily see it yourself by comparing travel times for the Paris-Berlin-Moscow train. The cheapest ticket you could get from Berlin to Moscow would cost approximately €160, with the trip taking a whopping 24 hours. Compare this to the cost of the cheapest non-stop airplane ticket of €90, with the flight taking less than 3 hours.

Traveling abroad by train is and has always been a luxury tourist attraction in Russia. As such, the wait line can get pretty long throughout the vacation season when everyone wants to get the fun train ride.

One could make an argument that with increased demand there should be greater supply. One reason that is not the case might be the fact that there is only one state-owned rail company operating in that region, yet there are multiple fully competitive airlines that operate in Russia.

The only fast and affordable train connecting Russia with a non-Soviet bloc country I can think of would be the Helsinki-St. Petersburg train. Note that the train is operated by the Finnish VR group (as opposed to RZD). A seat in the second class car would cost mere €39, getting you to your destination in just 3 hours. Moreover, you could book it for almost any day, even tomorrow.

To summarize, the likely (though admittedly unsatisfying) answer to your question "why do almost all international trains show as sold out" would be "because the Russian government wants it this way, or just does not care enough".

13
I'm in Volgograd, Russia. Aside from trains, is there another way to get to Astrakhan?
11
Should I book my train connections in advance in China?
16
Can I take trains in Finland even if it shows sold out?
21
Countries with solely international trains
13
How can a private person put a SNCF train ticket on hold to combine it with its return journey later?
8
Train travel in Russia between host cities during Football World Cup 2018
43
What time zone do trains in Russia operate on?
44
Who compensates my UK train ticket when the train in the ticket didn't exist?
2
Trans-Siberian trip in August