Delays in SFO in late February

Our cruise line has booked us on a flight from Charlotte (CLT) through San Francisco (SFO) on to Sydney (SYD) in late February, but the connecting time is only 1.5 hours. The cruise line says it’s a legal connection and won’t change to earlier flight out of Charlotte.

What is likelihood that fog will delay us getting into SFO, which could cause us to miss the flight to SYD?

Fog in San Francisco is largely a morning phenomenon when it happens, and has largely cleared out by afternoon. If your flight arrives after, say, 1pm then you'll probably be OK. All the SFO-SYD flights I see currently leave in the evening. 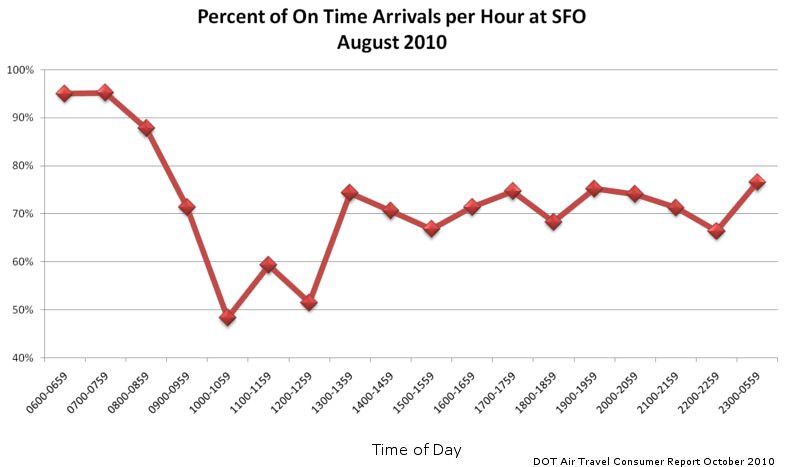 While a bit dated, this graph is pretty representative of what you can expect at any given hour of the day. The later your flight arrives, generally, the more likely it will not be delayed by weather.

Also, since your flights are eight months away, it's quite possible the flight schedules will change between now and then and you'll have to be rebooked anyway.

Michael Hampton is correct that fog is unlikely to be a problem. High winds are more likely to be an issue, as they cause one of the runways to close, but there is no way to guess that months in advance.

I suggest you prepare a list of alternate connecting cities, e.g., LAX or DFW. If SFO weather is bad, you may know that already when you arrive at CLT. Point out that you need to be rebooked to make it to SYD. This works best if you are already prepared with a better itinerary. Check the SFO flight hours in advance.

If the flight is on time, 90 minutes is more than adequate to change terminals and for your baggage to get transferred.

6
How long does it take to transfer from Terminal 3 to Terminal 1 at SFO?
1
Only one hour for changing flight from Victoria BC to SFO to LHR
5
Is 1hr 25mins long enough to go through international layover processes in the USA?
2
International arrival and departure at SFO
2
Connecting between terminal 1 and 2 at SFO
1
1.5-hour connection time for an international flight from Vancouver (YVR) to Sydney (SYD) through San Francisco (SFO)
0
Connection time SFO (ZRH-SFO_KOA)
11
Does travel insurance for short flight delays exist?
1
Missed connection & long delay on an Iberia/American flight from US to Spain. Am I entitled to compensation?
5
How likely will I or my luggage miss a tight Japan Airlines connecting flight in NRT while travelling from Southeast Asia to the US?