Churchill, Manitoba is the "Polar Bear Capital of the World", being built in the middle of a polar bear migration route. 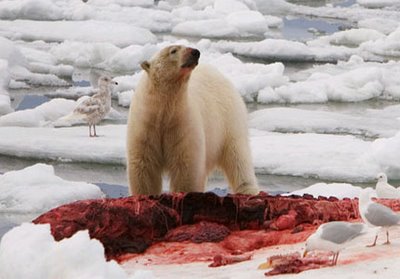 Everything I've read tells me the best time to see the bears there is in November. However, what I can't find out is whether or not that's the ONLY time to see them, or whether if I go in late March/early April, if I'll be able to see any then. It's a 36 hour train trip each way from Winnipeg which I'm passing through, so I want to be pretty certain if I go.

Links preferred, but personal experience of seeing them would be handy too.

Observing polar bears in Churchill is kind of like going on safari - the odds of seeing the animals aren't guaranteed, so your best bet is to catch them during periods of migration. While I've never been during April, I hear because it's between mating and hibernation tour guides try not to disturb them in Wapusk.

Just so you do know, Wapusk is 2.5 hours away and only accessible by helicopter or snow buggy so you're stuck going when the tours go. Wat'chee does tours in March (which sound cool because they're also Aurora Borealis tours combined!), but I think they conclude mid-March. So I guess your decision isn't really a decision if you're there at the end of March or in April. So double check because Wapusk without a guide sounds miserable if you can even get there.

You could go snorkeling with Beluga whales in April though, Frontier (same company that does the fall polar bear tours) offers snorkeling. :-)

Not the answer you're looking for? Browse other questions tagged canada nature-and-wildlife seasonal churchill manitoba or ask your own question.

13
Seeing puffins in their natural habitat
18
Seeing Penguins “in the wild” in Sydney
8
Does the country Georgia have a problem with bears, wolves, or dangerous feral dogs?
6
Any way to get a cheaper train ticket from Winnipeg to Churchill?
9
Where in India do I have the best chance of seeing wild tigers?
3
When is Spring in the USA?
4
Immersion at St Helen's Spring (Sacred Spring in England)
6
Which tour companies have a full permit to access the Churchill Wildlife Management Area?
4
When is there a high chance of seeing the aurora from Sweden?