I cannot seem to find the gate I20 depicted on the MUC termial map. I am flying from Tel Aviv, Israel to Cluj,Romania connecting through MUC. How much time required to connect arriving LH681 from TLV gate I20 connecting to LH 1668 H39 Cluj, Romania.

short-connections lufthansa muc
Share
Improve this question
edited May 10 '19 at 3:01

I20 refers to a "remote stand", where you will need to then catch a bus from the plane to the terminal. Munich Airports website confirms this, showing the plane arriving at "Gate REMOTE" : 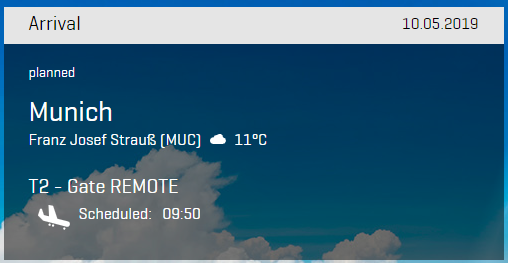 As far as connection times, Munich is one of (if not THE) best airport in the world for short connections presuming both flights are on Lufthansa, with many flights having a 30 minute minimum connection time.

Israel and Romania are both (currently, see below) outside of the Schengen zone, which means there is generally no need to clear immigration between flights - and most likely also no need to re-clear security when coming from Israel. In the even of a short connection it's not uncommon for Lufthansa staff to meet the inbound flight at a remote gate and take passengers via car or mini-bus directly to their connecting flight - especially if it's also leaving from a remote stand.

If you are changing airlines, or booking on multiple tickets, then it's always a good idea to leave additional time between flights.

(Note that Romania is due to enter the Schengen area agreement, potentially as early as later this year. That would change this answer as you would need to go through immigration before making it to your connecting flight, which would add additional time)

Not the answer you're looking for? Browse other questions tagged short-connections lufthansa muc or ask your own question.

15
Is 50 minutes of transit time ample in Amsterdam airport?
16
Possible reimbursement for missed connection due to gate change
4
2 jetways for arrival of international flight at Newark?
6
Connection time needed from USA to Heathrow to Shannon
0
Transit time required in Istanbul airport
0
Minimum connection time in Sydney
4
US to Germany connecting in Dublin - how much time needed to transfer?
11
Is it possible to transfer between terminals at Tel Aviv Ben Gurion airport without leaving air side?
7
1 Hour 10 Minute Connection in New Istanbul Airport