What equipment should I travel with to increase the odds of good internet and phone connectivity?

Getting decent internet and telephone coverage while traveling is not a given. I find that outside of urban areas many places I stay when traveling have unreliable internet connectivity, if any. This question confirms that hotel wifi is hit-and-miss. I also find that cellular coverage is marginal in many places.

What equipment is helpful to take with you to maximize the odds of having decent internet and phone connectivity while traveling? And how, exactly, does each piece of equipment help?

I arrived at the kit below by adding gear only as needed. I started with just an iPhone and laptop and only added to that when it was literally impossible to get reliable internet at my accommodations with the gear I already had. I have trial-and-errored through a bunch of other gear that turned out to be unhelpful or not worth the bulk (e.g. higher powered boosters, satellite gear) and deliberately left those out.

The No Holds Barred Approach

I have obligations that require me to have fairly decent internet most of the time, even when traveling. For most people my kit is probably overkill because they can either wait until they are staying in a place with better coverage, or travel a small distance to a public place with better connectivity. In my case pretty much everything (convenience, cost, etc) is of secondary importance to having 'uptime' wherever my accomodations happen to be. That said, I do not travel with anything that I do not rely on regularly to achieve good connectivity. I have found that the particular capabilities of the devices I carry is at least as important as nominally having them with me. I have included those particulars in the sections below.

Here is the concrete list of items that I currently travel with to achieve good connectivity:

Cellular Devices from Home that Work at the Destination

I travel a fair amount, so one of my criteria for selecting cellular network devices is that they have a hope of being used in other countries and with other mobile network operators. Here are the criteria that I look for in a cellular device for traveling:

I don't know other phone offerings very well, but I suspect some hardware versions are more widespread than others, so look for the most universally used versions.

Sometimes I am able to save on international roaming costs by getting a SIM Card from a mobile network operator at my destination. In this case, I travel with a second handset and keep my home network's SIM Card in it. Its sole purpose is for me to see who is calling and SMSing my home mobile number. Without a second handset, I have no record of missed calls, and I would need to swap my home network's SIM Card back into my handset in order to get SMS messages for that number.

These adapters allow me to take a smaller SIM Card and put it in a device that expects a larger one. Having the adapters makes it possible to move my SIM Card between dissimilar devices.

Get these before you leave home, they are mainly available mail-order and therefore not that easy to obtain while traveling. Without the flexibility afforded by these adapters, it is not always possible to achieve the combination of carriers and handsets that works best. 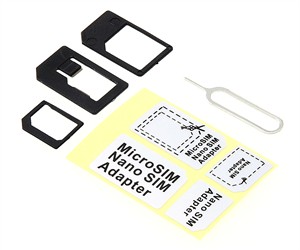 Now that I have the adapters, whenever I get a new SIM Card from a carrier, I always get the smallest one that works, so it will fit in as many other devices as possible.

If you are in a bind where you have a larger SIM Card than you can fit in your device and you can't swap it for one of the right size, you can usually trim them down. There are loads of how-to pages and videos on how to do this (here's one). Here is what you need:

The process is rather quick, if unforgiving. The most important thing, though, is that you have the required tools to achieve the modification.

Personal Hotspot on A Different Network at My Destination

As a backup for my devices with built-in cellular data, I use a cellular data personal hotspot. The hotspot is deliberately activated with a different mobile network operator from my other devices. That way, I have slightly better geographic data coverage because I can use data from either network. I have also used this device during an outage on the network that my phone was on.

I use a signal booster to get a cellular signal that is otherwise too weak to be usable. Some car-type booster kits like the Wilson 2B5225 are small and light.

Despite that these boosters are designed to be used in a car, they can be used in buildings as well. The antennas are designed with magnetic bases to mount to the exterior of a car. This arrangement provides both a physical mount and a ground-plane for the antenna. Sitting at a desk with marginal cellular coverage, I often power the booster over USB from my laptop and use it to boost my phone for voice calls and internet. In that case, I have found that I can usually find a metal baking sheet or roasting pan to use as a ground-plane and mounting surface.

I have cellular data built-in to as many of my connected devices as possible. There are a few different reasons this helps achieve better connectivity:

1 From a ladder I once tied my iPad to the soffet of a tin-clad warehouse to get a reliable internet connection through a window where my laptop was. Haywire? Yes. But the point is that my iPad was the only device that could keep a signal to both to the cell network and my laptop. It worked all day.

I recently added a USB battery pack to my kit. This allowed me to reduce the number of USB power adapters I carry to two: One AC, and one car adapter.

There are two main reasons why a battery pack works better than straight adapters.

I have standardized on dual 2.1 Amp (10 Watt) output chargers and battery pack. It takes about 6 hours to charge the battery pack using these adapters. Since switching to a USB battery pack I have neither had a dead device battery, nor have I had an awkward cabling situation.

Another nice side-effect of the battery pack is that I only need to carry short cables to charge my devices.

I find that four cables is all I need to carry to make the best of almost any terrestrial internet connection:

With the above four cables, I can usually rearrange things so that I'm connected via cable or my own wifi access point using bridge mode, and/or closer to the gateway so that I have decent signal strength and can reset it when it locks up.

The network cables are also useful for connecting up the wifi access point that I travel with when I'm staying someplace with wired internet.

I suppose I might one day have to do the same rearranging with cable-based terrestrial internet, although I have not needed to do that yet.

These are handy when I need to move a DSL gateway to a more sensible phone jack, and that jack already has a phone plugged into it.

I use my own Airport Extreme when traveling in two different situations:

I opted for an Airport Extreme rather than an AirPort Express only because it has 3x3:3 MIMO configuration as compared with 2x2:2. I made this choice on the speculation that the Extreme has better range with my other MIMO devices. I find that I am often near the limits of range between my laptop and my AirPort Extreme.

I also try to avoid any device with external antennas that can break off in my luggage. The AirPorts have their antennas built-in.

For the case where the only desk is far from the only internet connection, a laptop with a good MiMO wifi chipset (and my own wifi access point) is necessary if I want to make the connection without cables. My preference is the Intel 6300. I have had productive work days using a connection to my AirPort Extreme from remarkable distances.

@alx9r wrote a fantastically detailed post here, but I think it may be overkill. I'm on the road for most of the year and need to be connected 24/7 for work. For the most part you can get away with:

An mini-router (I use an Airport Express). Flakey hotel wifi can be remedied by using a LAN cable to your mobile router, providing a personal wifi spot, backed by reliable hardwire,

A multiband unlocked smartphone (I use an iPhone 5) Buy a prepaid SIM from your destination, most countries carry SIMs of all sizes, so the need for adapters is almost nil these days. Research your APN setting before you go if you plan on using 3G/LTE because sometimes out of network phones won't automatically update.

Your regular laptop/iPad and standard wifi equipment are now ready to go!

Don't overkill. I run several web based companies, one of then that makes digital travel guides (so travel + Internet are essential) and I get by fine with these things.

These days you can get SIM cards for iPhones pretty much everywhere. Then you can usually use the "Personal Hotspot" function on the iPhone to share the connection. Make sure you keep the SIM card after you go home as it is usually easier to get top-ups when you return than to keep getting new SIMs.

If you look respectable you are much more likely to be able to wander into hotel lobbies and hang out there for free using their wifi. Be careful as higher end hotels generally charge for their Internet.

Not the answer you're looking for? Browse other questions tagged cellphones gear internet or ask your own question.

47
What are the best ways to avoid data roaming fees when travelling abroad?
42
Is there any way of evaluating the quality of a hotel's internet connection in advance?
12
Any fast internet (good wifi) in Ubud (Bali)?
5
Need wireless internet access on Macbook Pro for travel in USA
3
What's a packing list one could use when traveling to a place with hot weather?

6
Good (up-to-date and reliable) source of information about travel destinations
8
Prepaid SIM card for Austria, with mobile internet and relatively cheap foreign calls
0
What are my options to access the Internet in Kuala Lumpur as a tourist?
3
Using mobile internet with a Elephone P7000 in the USA
6
Are there commercial airplanes on which I can access the Internet from my mobile phone?
0
Good and stable internet in Mexico