Are there any websites or resources for planning bicycle routes across western Europe?

A friend and I are potentially interested in doing a bicycle tour across parts of western Europe, which parts specifically we're not sure of yet. We would be starting in London and from there we would likely go to France.

We aren't really sure of how to go about planning any routes however. Google maps seems to have little to no cycle routes or information on the continent, following the given car route may not be entirely suitable either.

Are there any good resources for planning bicycle friendly routes?

Within England, the answer is The Cycle Streets site which will generate much more accurate and helpful cycling routes than Google, and could certainly be used to get you from London to the coast. It also generates astonishingly traffic-free routes through London itself.

Outside England, I can only suggest using the Open Cycle Map, which covers most of Europe. I don't know with what accuracy, but would tend to trust it at least in France, Germany, and Benelux, where there are strong cycling traditions. It shows the main national cycle routes in red, and local ones in blue. The Dutch network is very clearly signposted. You can use it with ViewRanger on a smartphone, though you'll need a data connection most of the time (it is possible to cache particular areas in advance)

Viewranger and RidewithGPS do bicycle route planning but neither, in my experience, are as good as the cyclestreets site. Sorry. I don't have the reputation points to post links to either of those two programs. Google is your friend.

There is also an established "route verte" from London to Paris, but I know nothing aobut it except the name and that it exists.

This would be a good start. According to the site, they have 14 major routes you may follow.

Most of these routeplanners will just guide you through any route disregarding the beauty/ugliness of the route.

An alternative would be the so called "knooppuntenroutes". This is an extensive bicyclepath network in the Benelux and bordering regions of Germany. Here the different cyclepaths are connected with numbers. The numbers are visible at the different nodes as signs similar to the picture below. 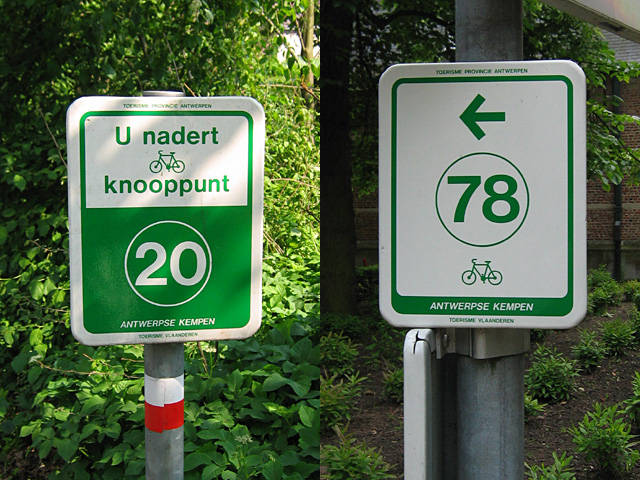 Its working is simple. You either buy the maps (NL/DE) showing the networks where the nodes are numbered. You note all the nodes on the trip you want to take and you can actually cycle the route by just following the numbers. Using the paper maps is by far the best option.

There is also an online maps to generate your sequence of nodes or numbers to follow, but the website is in dutch only and quite clumsy built. So technologicallywise, I would not recommend their online resource. The quality of the cycle paths and the way the signs are maintained on the other hand, is quite high and definitely worth considering if you want to travel in the Benelux and the region just over the border in Germany.

For accomodation you might want to check: Friends on the bycicle

You can use several resources. Some of them were already pointed here.

Google Maps contains routes for specific countrys like the Netherlans

Another way might be using some routes for the "Camino de Santiago". Even if you're not going there the "camino" is spreaded all over europe, coming from several places. You can cycle in most of the paths and there are even specific variants when it become hard for bikes. The paths allways avoid major roads, and try to go as most as possible through scenic routes. The camino is allways marked with arrows and you can find plenty information on the internet (this might be specially important if you are following the oposite way) 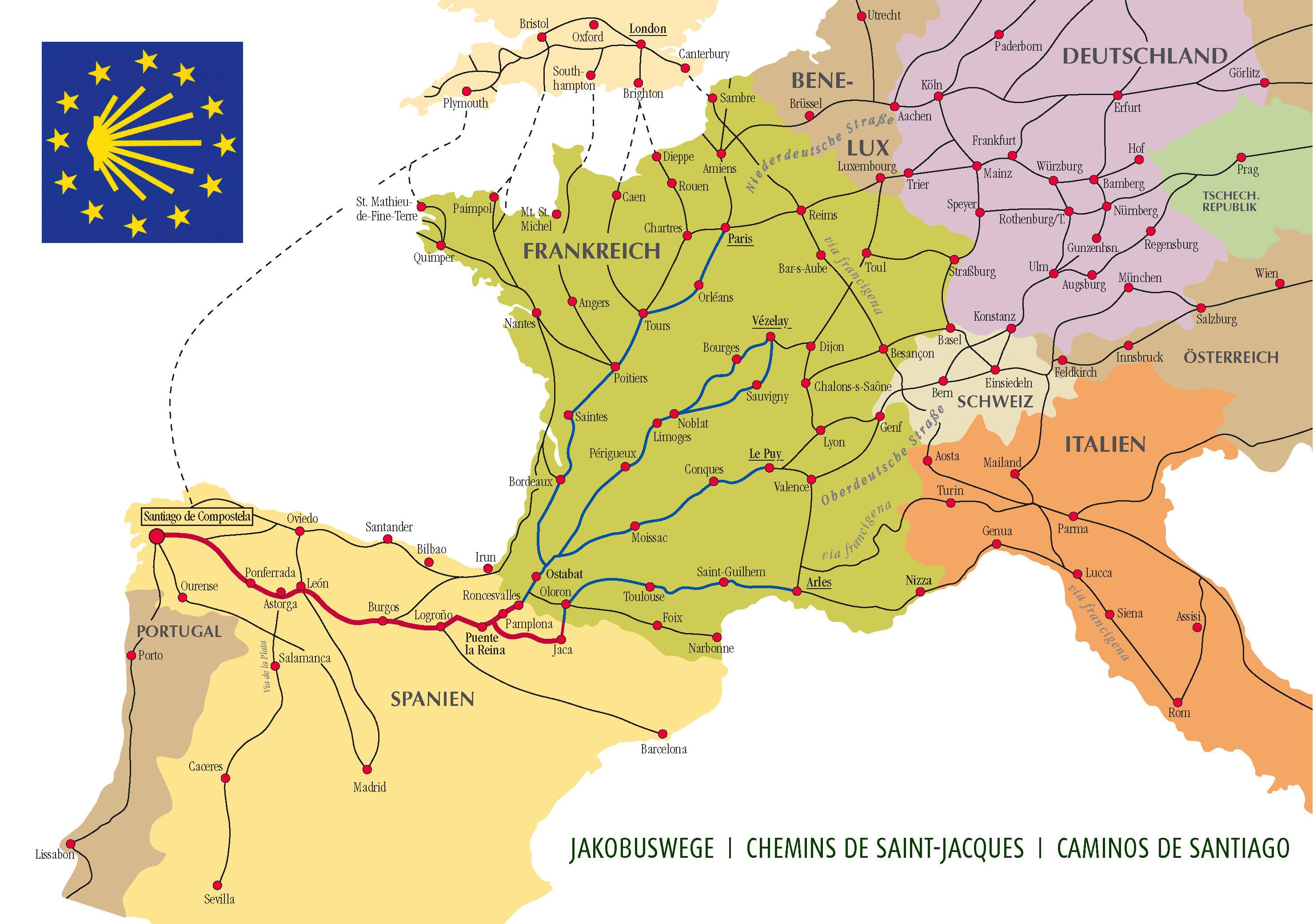 While google is a good for general planning, it is not made for cycling and while the cycling information is updated and improved it will never be specifically for long distance cycling.

There are several sites that do specialize in long distance cycling, either just routes of one organization or combining however many routes they can find that run within their working area.

Of the first kind, this map is a good one, routes all over Europe and it is an interactive map, click on a route and you will get a page with more information. I have not used EuroVelo myself, but I have cycled several parts of at least on of the routes.

I prefer the second type, where you will get many more route options. The Dutch (now with more language choices on the pages) Fietsrouteplanner (cycle route planner) which will also give you the option of printed texts in several language, GPS routes and/or routes with signposts along the route.

cycle.travel/map has full coverage of Western Europe (and North America), based on OpenStreetMap data. It aims to have the detailed bike-friendly knowledge of a custom planner like CycleStreets, but with the fast response and draggable UI of Google Maps, and is designed to be particularly suitable for touring. It's based on the fast OSRM routing software, extensively customised.

In some countries, it additionally uses real traffic statistics to keep you off the roads with the heaviest motor traffic.

I'm naturally biased as I've been building it for the last couple of years and wouldn't remotely expect anyone to trust my views on it! But if you'd like a third-party opinion, have a look at the Cycling UK forum (formerly the Cyclists' Touring Club) where it's been extensively discussed and you can see what people like (and don't like) about it.

12
Differences between the Routes of the Camino de Santiago

13
Are there any tour group comparison websites?
6
Any websites or resources for planning my trip around Europe?
11
Badges for tourist achievements in Western Europe?
9
Are there any websites or other resources that lists discounts or special conditions for seniors in Europe?
7
Petrol price comparison in Europe. Which resources are there?
5
Strategies for finding short hiking trails near a driving route in the Pacific North West?
5
Which websites provide last-minute deals for trains in Europe?
10
Bicycle routes in Europe