How to search for accessible routes? (In case, Seattle)

When arriving to my Airbnb close to the Montlake Boulevard Market, I found there are a number of stairs to climb from the Montlake Freeway Station. But there are other bus stops in the immediate vicinity which are level with the street. Is there a route planner which would show / avoid such problems? Just in Seattle is helpful but globally would be even better.

As you know, public transit is poorly coordinated throughout the United States. Even in cities with high ridership, there are multiple government agencies, interstate compacts and governmental corporations, and private concessionaires who operate services, all competing for passengers, and all backed by different political interests— and so with few incentives to cooperate. There are around seven agencies operating in Seattle, and something like thirty in the San Francisco Bay Area.

Using the "Transit" option in Google Maps can be a good option, as they will aggregate schedule and station information from multiple agencies and return combined itineraries for given origin and destination points.

In the Google Maps apps as well as the website version, just below the starting and ending points, you should see an "Options" link. Opening it will show "Route options", one of which is "Wheelchair accessible." 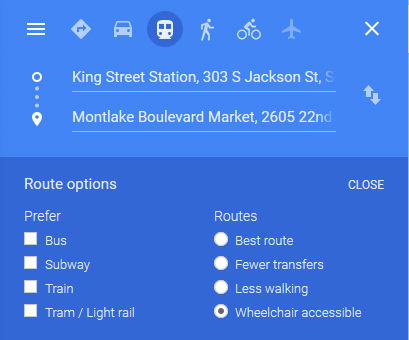 The downside is that Google Maps is dependent on the cooperation of the transit agencies. If agencies do not participate, they they will not factor into Google's calculations at all, and if the agencies provide inaccurate data, or do not keep their data up-to-date, the results will be correspondingly disappointing.

Many agencies provide their own transit planning websites or mobile apps, which often have a filter for "accessible" under some label or another. Some cities have jointly operated planning sites, and there are also independent mobile apps using agency-supplied data. One can expect this data to be at least as reliable as Google, but the technology behind the planner may not be as sophisticated. As with Google Maps, not all agencies participate, and not all provide full data.

As a case in point, Sound Transit, which operates the light rail and some bus services in Seattle, has its own Trip Planner website. It too allows you to set trip preferences, one of which is "Accessible trip." I had a lot of trouble using this site in Firefox, however, where it help telling me a trip was impossible when I knew for certain it was. I eventually had to restart my browser for it to return an accurate result.

As serving people with disabilities is a key mission of all urban public transportation authorities in the U.S., many publish guides which may suggest certain facilities or routes. King County Metro (a second major agency serving the City of Seattle) provides such a guide for downtown Seattle, though not all the way up to Montlake.

Since the question asked globally, it's worth cross referencing this answer -- Citymapper does have a "Wheelchair accessible" section where such data is available. Not in Seattle or Vancouver but certainly in London.

Not the answer you're looking for? Browse other questions tagged public-transport online-resources accessibility seattle or ask your own question.

11
How do I find the fastest route from Heathrow to an address in London using all forms of transport?

4
At Brisbane Cultural Centre busway station, how do you know where on the platform to wait for a given bus?
2
Transportation from St Pancras station to ExCel convention center
24
What is the advantage / reason for many trams being high floored and non-accessible?
7
Intercity transportation in Cuba
6
London Underground:Baker St to Liverpool St, step access
32
How to plan a UK train route avoiding the tube?
36
What is the best way to ensure a disabled, inexperienced passenger will receive suitable assistance on a trip from Windhoek to Europe?
3
Train from Vancouver to Seattle Airport