I am planning on doing a long distance bike trip through part of Europe. I would like to start in Amsterdam and bike through the Netherlands, parts of Belgium, France, Luxembourg, and Germany and end in Switzerland. I have found that OpenStreepMaps has a very useful "Cycle Map" layer which displays many bike routes. However, when I look up biking directions on Google Maps or OpenStreetMaps, it routes me on many roads. I would prefer to stay on as many bike routes as possible, especially since there are so many in the region. Is there a good way to get directions using only bike routes? Or a good way to create and save my own custom route?

I would suggest at least basing a route on one or more of the EuroVelo routes. Particularly Route 5 and Route 15. 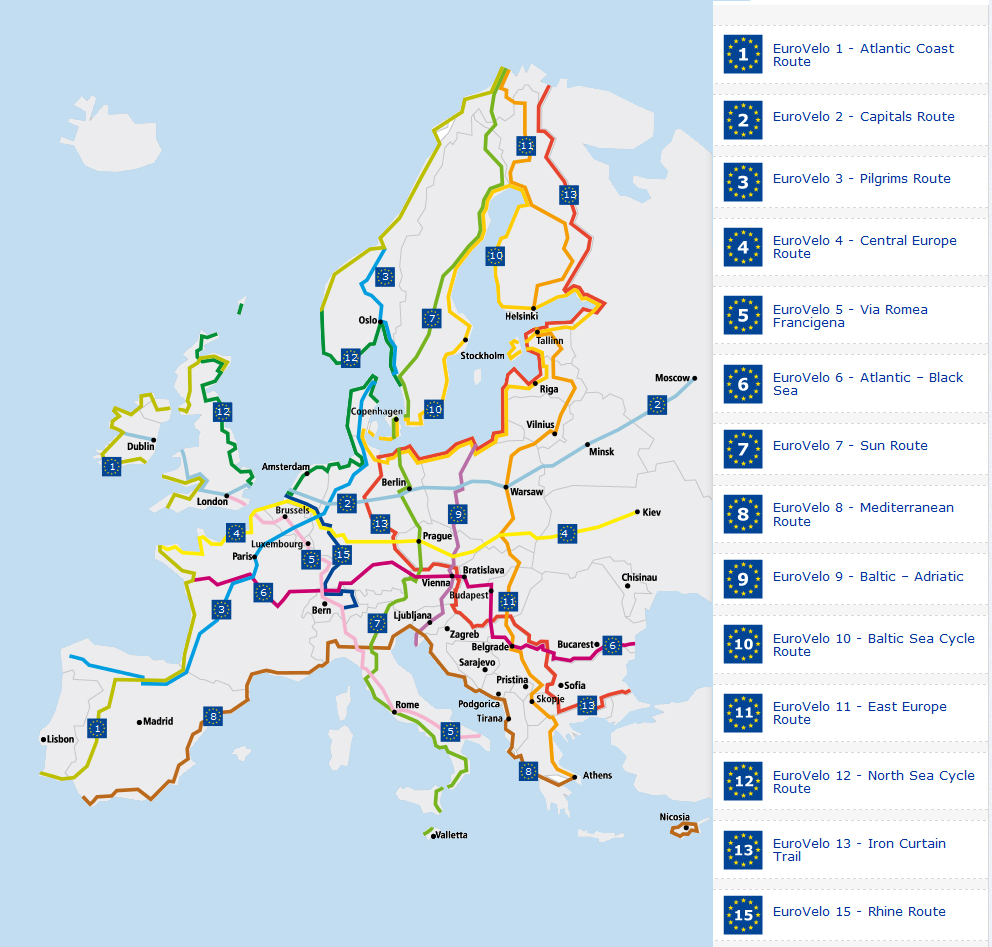 It should save quite a lot of planning time and the routes are more or less signposted.

In terms of a tool for selecting a route manually, I have long been impressed by Ride With GPS's mapping functionality.

There will be quite a lot of road in there, so I think you're best off using a tool that routes well on roads, and pulling it onto bike paths where you can. I've done quite a few (part-day) chunks of Euro-velo 6, and that includes quite a lot of road, most but not all of which is quiet. By sticking too rigidly to maximising bike paths you can end up having to join them with some nasty stuff.

I take a multi-tool approach to route planning. For me the biggest requirement is getting out a GPX file of the route I planned. If you can get a reasonably detailed map of a long-distance route that goes in roughly the right direction, it's easy to re-create it, but note that many long-distance routes use quite a lot of road.

These days I use Komoot (planning is free but some important features like large-area export require a one-off payment). This uses OpenStreetMap data which these days is very good, and results in routes far better than Google can produce. Google is useful for getting rough estimates of daily distances and broad directions, because it's very responsive. RideWithGPS is also popular. Both of these allow you to import a downloaded GPX file to modify it; RideWithGPS (and Strava) with careful searching, can often provide a route to start from, and many long-distance routes have official or other files online at their own websites.

Previously (Strava route builder now costs money, and has some other downsides, but is still an option if you have a subscription anyway): As a primary tool in the UK and France, I use Strava's route builder. It's quite good at routing on quiet roads, with the "popularity" option turned on. If you're touring you may want to use the "minimise elevation" options to route round hills. The crucial feature in its favour though is that you can drag unlimited points on the route onto the road/track you want.

I tend to have OSM and Google maps open in other tabs at the same time (also Cafe Network to plan my stops but that's mainly a UK thing).

I initially tend to let Komoot Strava auto-route segments of up to about 100 km between points I think I want to stop at (perhaps using Google Maps to generate an overview). Then I tweak the route by hand. Street view is good here if you have the slightest suspicion about the road; some bike paths are on it too.

Use a dedicated bike route planner.
For the Netherlands and Belgium you will find several or even many.
Search on fiets route planner or try in your preferred language.

For long distance travel, as you are planning, I would use long distance bike routes. There are planners which combines those. Fietsvakantie is one of them. This page tells you how to use this site.

It combines long distance bike routes into one long route for you, giving several options where there are more routes. In 'overige route voorkeuren' (other route preferences) you can select routes with sign posts, routes with GPS (satnav) and to avoid ferries.

Once you have found which routes are useful for you, you can buy them from this site but you can also search online and often get them for free elsewhere.
One site where you can find long distance cycle routes in the Netherlands is this one of the cyclist union.

The sites I linked to here are mostly to show what is around, there are more sites specific for long distance bicycle trips.

Not the answer you're looking for? Browse other questions tagged europe bicycles routes western-europe or ask your own question.

20
Searching for bikeable offensive town names in Europe like "Fucking"
8
How long does it take to bike to Marken Island from Amsterdam
12
How can I estimate the duration of a long bicycle trip?
18
Are there any websites or resources for planning bicycle routes across western Europe?
6
Good route for a 1-day bike trip around Amsterdam