I am planning to get to Zurich on Jun 13 and I land in Paris on Jun 12 at 16:40PM. While I could fly, the train doesn't look so bad. I am trying to find a train around 6PM going to somewhere that would get me closer to Zurich. I have already figured out the TGV Lyria stops at Dijon, Belfort-Montbéliard, Mulhouse and Basel. Searched SNCF for CDG-Dijon and the train is at 19:57 which is no good, I am incoming from Vancouver, I would die waiting two hours for my train. There is a train to Lyon at 17:57 which is great but for my life I can't figure out where does it stop because going all the way to Lyon is clearly counterproductive.

What I can't find on the SNCF site are timetables. I can find realtime departures (useless) and a route finder which is equally useless. I am 100% these exist but where are they?

You can use the DB site, to get an overview which trains are departing at a given station in a given time frame: https://reiseauskunft.bahn.de/bin/bhftafel.exe/en

If you click then on a train number, you get the schedule for that train with all stops and times.

On that page, the "ICE" category includes TGV, Thalys and other high velocity trains. 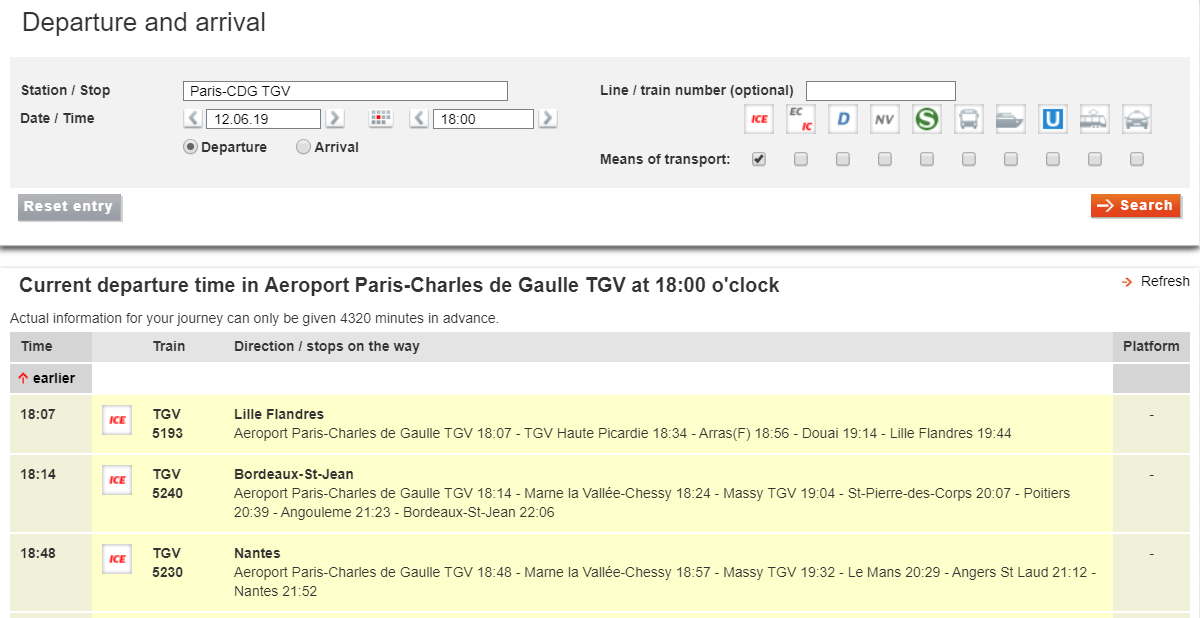 CDG-Zürich is not an easy one by train, honestly.

The other option is to get from CDG to Paris Gare de Lyon where you can get a direct TGV to Zurich (depart Gare de Lyon 18:23, arrive in Zurich 22:26). Timing in Paris is a bit tight, though, you would need to be at the CDG TGV station by 17:20 to have a chance to catch that TGV, and you are dependent on the notoriously unreliable RER B and D.

Not really sure there are any other easy options, you probably would have to go through Lyon and Geneva, which is quite a detour.

Note the SNCF site will not show connections with more than 2 changes, while the DB or SBB sites will.

I really think your best option here is still to fly from CDG to Zurich.

If you want to split the trip, you can either stop in Strasbourg, Basel, or anywhere the TER Alsace stops in between.

For instance, the 18:58 train at CDG arrives at 20:58 in Strasbourg. You then have many choices for Strasbourg-Zürich in the morning the next day.

Not sure whether this is what you are looking for, but this link seems to work for me. Basically you can enter your "From" and "To" place directly on https://www.sncf.com/en.

Unless you can catch the 18:23 in Paris (which should arrive in Zurich at 22:26) you might be better off with spending a night in Paris and taking the TGV leaving 07:23 on Jun 13th to arrive in Zurich at 11:26. There are some connections in-between, but they require you to change the train quite often during the night. If you want to look into those anyway, try https://www.sbb.ch/ which worked better for me in this case.

Not the answer you're looking for? Browse other questions tagged trains sncf or ask your own question.

6
French Strikes: Using idTGV ticket for standard (SNCF) TGV
15
On TGV (or other French long-distance trains), can you take the earlier/later train?
8
Can I change our assigned seats on our TGV Atlantic train itinerary?
8
Do I need to label my luggage on the French TGV?
7
Wrong surname on TGV Lyria ticket / Loopholes
5
Reservations on TGV when delays require a different train?
2
TGV ticket price appreciation as departure date approaches
13
Bikes on TGV/THALYS
12
Corridor seats on the TGV — why? Are seat reservations not always mandatory?