Why does my laptop charger not work with this adapter?

I just bought this adapter at the hotel because I forgot to bring mine from home. For some reason my laptop is not charging when I use this. 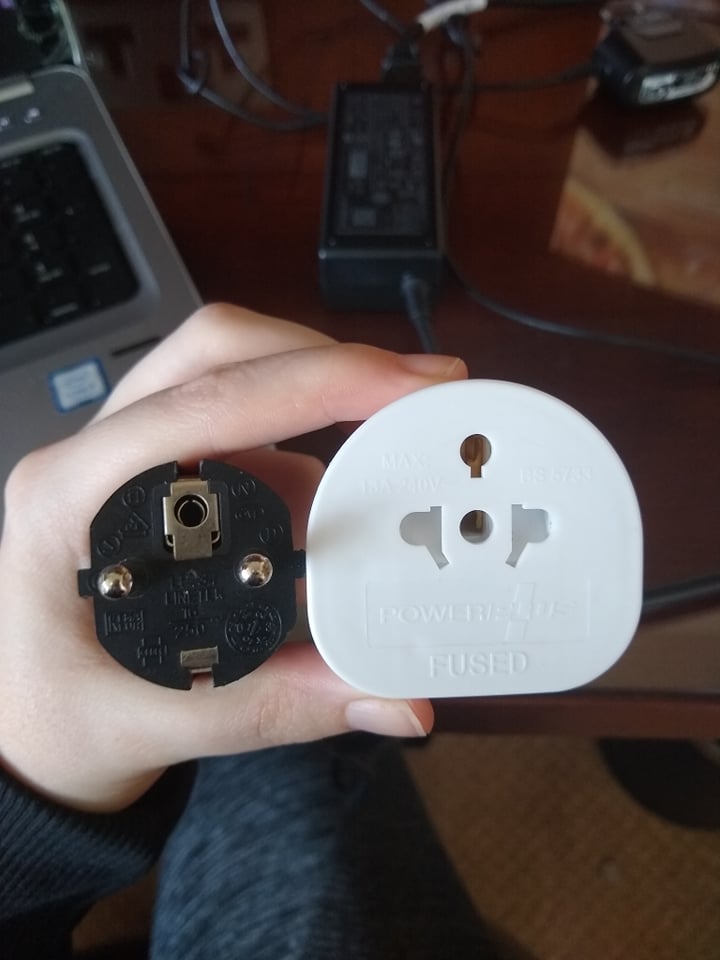 My charger works until ~250V and the adapter accepts 240V.

As the photo shows it's fused. The fuse might be blown. It happened to me before with these adapters, almost none of them adhere to the relevant standards so problems are expected (the adapter on the photo accepts a US and an Australian plug besides the EU plug you have, there is no standard allowing for that). The other possibility the socket doesn't have power. If the hotel room has a nightlight with a plug , you can use it as a tester or you can plug somewhere else. There's a switch next to the UK plugs, try both directions.

That might be the fuse (which is mentioned on the face of it visible in the photo) or some of the wiring inside. (The fuse is also mentioned in one of the other answers.)

As you bought it in a hotel to use in that hotel, I would go back and ask them to replace it. That is after you have tested it in an other outlet, checked the switch on the outlet was in the right position, the plug did fit well enough in the adapter to make a good connection and other simple checks you can think up.

It might indeed be that your particular adapter does not work with your particular plug, in that case a decent seller will take it back and return your money. Or at least replace it with one that is working.

Small warning, you will never get an earthed connection with this combination, as the earth parts do not match.

So this does not go answered the plug on the left which we are all assuming is the OP's charger is a common type in some other countries in Europe (hence the tag EU) and adapters to use it in the UK (question tagged UK) look absolutely nothing like the one shown which is for visitors from elsewhere. They would usually have two holes positioned to accept the pins and possibly the clips which ensure earthing with plugs which have contacts on the circumference. They are unlikely to have the pin which is an alternative earthing system.

So the conclusion must be that the OP has been sold the wrong adapter possibly as a misunderstanding of what country they came from.

Not the answer you're looking for? Browse other questions tagged uk eu power or ask your own question.

5
Will this device work with a US/Europe adapter?
17
Is there a Macgyver-esque way to charge rechargeable batteries?
3
Is it normal that a socket only gives electricity when the plug is plugged in one way?
10
Power converter that worked in Barcelona doesn't work in Rome - how to recover?
6
Adapter voltage different to both mains power and appliance expectations
28
Issues powering a US laptop in Europe, via an adapter
22
Can I use my laptop, which says 100-240V, in the USA?