Should I transfer the money now and reapply? [duplicate]

I had applied for a visit visa (business) to appear for my PLAB 2 exam on 21 June 2019. I had to attend practice classes from an academy in Manchester for which I had attached the invitation letter; my duration was 15 days to prepare my exam in a better way. I had mentioned the cost of my trip to be £1500 and my brother sponsoring me for £3000 (my entire trip).

My rejection letter stated that I was going with my mother, when I had nowhere in my form or cover letter mentioned that I am going with my mother, because I was going alone. I had shown that my brother is my financial sponsor as I didn't have enough funds in my account. I had attested all the documents of my brother but somewhere in my form I made a mistake where I wrote the total money I have is £3000, but I had only £1200 in my account. I thought we had to write the total amount, so I put my brother's sponsor money, which was supposed to be £3000; he hadn't transferred it into my account, it was in his account only. I made one more mistake in the form where they asked how much is the cost of travel to you personally. I wrote £1500 but I think I had to write nil there. I don't know how to proceed now. Should I transfer £3000 into my account from my brother's account and get a bank statement proving the source of income? I don't have enough money in my account despite being employed since Nov 2018 with a salary of £700 per month( currently having around 700£ in my account which is less than before)as I had to make some big transactions such as booking my PLAB 2 exam (£830£), etc.

I have already booked the exam for and I don't have much time left. 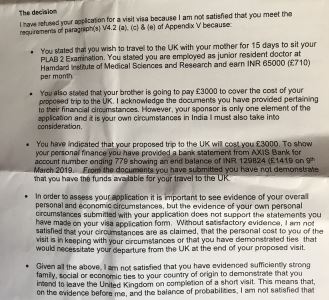 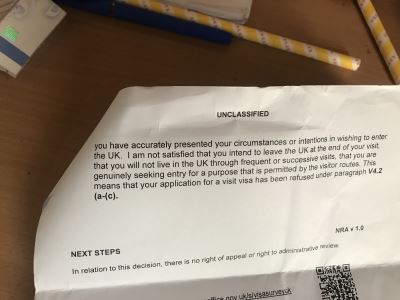 Depositing a sum of money into your account shortly before applying for a visa can be a red flag to an ECO. On TSE we refer to it as ‘funds parking’ UK Visa Refusal: Provenance of funds/parking and it typically leads to a refusal.

The premise of the application is that your brother will give you £3,000, not that he has already given it to you. The best approach is to provide evidence to prove your brother will and can afford to fulfil his commitment to give you the £3,000 (letter from him, plus 6 months’ bank statements and payslips) with the application and transfer it after you receive the visa.

If you decide to go ahead and transfer the money before you reapply, you must make sure that the supporting documentation you submit is watertight. My application was refused due to 'lack of evidence of funds', are there hidden requirements for UK visa applications?

1
UK visa refusal For PLAB 2
25
My application was refused due to 'lack of evidence of funds', are there hidden requirements for UK visa applications?
25
UK Visa Refusal: Provenance of funds/parking

2
UK Standard Visitor Visa refusal for lack of evidence on funds - how to reapply?
2
Application for UK Standard visa twice refused, what next?
6
UK visa refusal due to undefined source of fund after retirement
16
I've applied for a UK Standard Visitor visa to attend to my sick husband, but my application was refused. How should I reapply?
0
UK visit visa refused due to unexplained deposits, how to address. complex statement