According to Google Flights, there are reasonably priced (~100 USD) tickets from Sydney to Melbourne (roundtrip) for all dates, including a couple of days from now. Is it typical? I plan to fly in August and I'm trying to work out if I need to buy the tickets now to guarantee a good price, or if I can wait until nearer the date I plan to fly.

I don't think this is a duplicate because I'm asking about pricing trends specifically for domestic flights in Australia (because apparently [according to Google Flights] they are different from those in the US).

Yes, prices for Australian domestic flights tend to increase as the departure date approaches. You can trivially confirm this with a local booking engine like Webjet, and here's a snapshot of their best available SYD-MEL fares for the next few weeks: 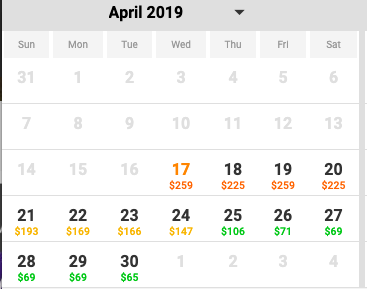 Also, there's nothing particularly Australian about this phenomenon, it applies to all modern airline pricing. See this epic answer for much more detail.

In general there are two pricing tiers used by Australian airlines - the "deals" and the standard. There's a certain number in the deal bucket and everything else goes into the standard bucket.

If there are available tickets in the cheaper bucket it's worth booking ASAP. If there's none left the standard flight prices don't tend to increase significantly. Indeed you'll find prices vary more significantly across the day rather than between days - first thing in the morning is the cheapest.

If you monitor the prices you might get cheaper sale prices if you're flying off peak times (no weeknights, no weekends) but the difference often isn't more than the difference between the "deal" and "standard" options.

Not the answer you're looking for? Browse other questions tagged air-travel australia fares syd mel or ask your own question.

126
Flight tickets: buy two weeks before even during holiday seasons?

12
What times do the Sydney international and domestic airports open and close?
1
Flying TYO - FRA - LAX - TYO
11
At what time frame is there a significant increase of the price of airplaine tickets?
6
How to search for (cheap) flights, for flexible travel dates within 1 week or more?
3
2h 15min to change plane & rechecking bag on different tickets in Sydney - Anything to improve my timing?
5
How to tell if two flights are scheduled to use the same equipment when booking?
42
What is the cheapest regular-priced scheduled flight I can book and fly?