I am traveling to Budapest next month via Bratislava airport. We will be arriving at 20:40 in Bratislava, and we want to catch a bus or train to Budapest ASAP.

From what I have found the best option is to catch the 21:30 FlixBus from Bratislava, AS Mlynské nivy station.

The only other available options, that leave later from Bratislava airport, are going through Vienna, which is in the opposite direction, and the trip lasts many hours.

So I would like to ask, if you think it would be possible (if the flight has no delays of course) to make it to the bus station by 21:30 from the airport (leaving say at 21:00) on a Friday night. (We will take a taxi from the airport in order to have a chance to be on time.) Our flight is from within Schengen, so we'll only have to wait for checked bags, not immigration.

P.S. If you know of any other available options please let me know.

Update The FlixBus service is the only one I could find online. I would be greatful if someone local can point me to other transportation services available (like local bus companies) that have any routes later that 21:30 from Bratislava to Budapest.

I would be interested also to know how much approximately a taxi fare would be.

The taxi ride was less than 15 minutes, with almost no traffic at all (being it holy Friday i suppose(?)) and since we had no checked in bags, and the taxis were just outside the arrival hall, we were able to get one at 21:00.

Just be careful when going to the bus station, as it seems that the old terminal, that is permanently closed, is still listed on Google maps, and that can be misleading.

Is planeside at BTS Airport to AS Mlynské nivy doable in 50 min?

It might work out but it's extremely tight with checked bags.

In order to make the connetion the flight will need to be exactly on time, the baggage service quite promt and there be no other hiccups. I expect the biggest risk beyond the flight is for the bags to take more than 20 minutes to make it onto the claim. This probably depends on how many other flights are being handled at that moment.

BTS Airport is small, planes often park at gates where passengers can just walk up to the terminal and exit through baggage claim. Sometimes, though, passengers need take buses from the plane to terminal, adding a few minutes.

Options for travelling Bratislava to Budapest at night

Unfortunately the 21:30 FlixBus is indeed the last bus of the night on the dates I checked. RegioJet offers the first bus at 3:15 the next morning.

There are no train connections either during this time. With one adventerous exception - that only runs on Satudays: you could take the RegioJet train from Bratislava Nove Mesto at 22:13 to Komárno arriving at 00:13. Then walk or take a taxi to Komarom (Hungary) to catch train R 4819 departing 3:39 to Budapest-Deli arriving 5:09.

The taxi ride is <15 minutes. Here's the Google Maps route. It's a bit tricky to get Gmaps route it properly, it goes bonkers with the lanes on the bridgehead but if you set it to go to the Regiojet stop, then it draws the straight lines.

Speaking of Regiojet, while there is no way to prove a negative, but here's what Regiojet has to offer: 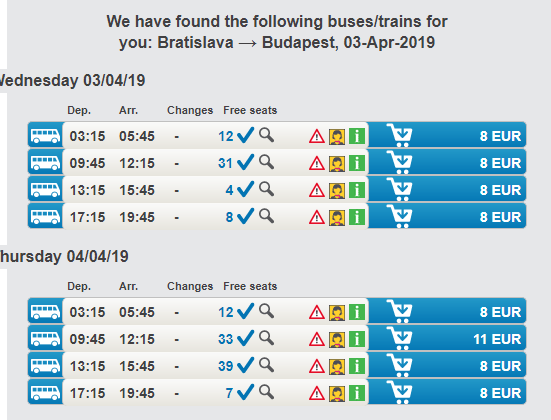 Googling in Hungarian doesn't get further, this is from a Hungarian site:

these are remarkably the same buses.

You can try, but is it worth the stress? Imagine arriving at an unfamiliar airport, waiting for your bags, and dashing to the taxi rank (wherever that is), only to miss your bus by three minutes! If I were you, I would find a hotel in Bratislava (a taxi to Budapest costs 142 Euros, according to this website).

I know that some online booking agents seem to treat Bratislava as an alternative airport to Budapest, but it really isn't. It's 200km!

Not the answer you're looking for? Browse other questions tagged buses budapest bratislava flixbus or ask your own question.

4
Is a Budapest “transfer ticket” valid for Bus then Metro then Tram?
7
How late do the 200E bus and Metro 3 run from Budapest airport into the city?
4
How long does it take to get to Budapest airport (BUD) by bus?
4
How can I check the current situation in Budapest train station?
3
How to get from Nagoya Airport to Matsumoto by bus
5
Is there a Twin City Liner sales office in Bratislava?
7
What is the fastest way to get from Mineralnye Vody to Kislovodsk by bus?
2
Is there any bus that works all day-long between Tirana International Airport and Skanderbeg Square?
2
What are the public transport options to the Hungaroring?