Not able to read bus schedule in France

This pdf file indicates which bus I should take from Vallorbe to Metabief.

However, as I am not able to read French, can someone kindly help to read the file and pinpoint me to which bus should I take at Vallorbe in order to reach Metabief?

Métabief is a village in France. Vallorbe is across the border in Switzerland. Vallorbe is not the primary way to reach Métabief: that would be Frasne, in France, even though it's farther from Métabief. The bus schedule you've found gives you a few more options between Frasne and Métabief than between Vallorbe and Métabief.

Some useful translations for this schedule:

Métabief is a ski resort. During peak ski season (French winter school holidays), a shuttle bus runs between Frasne and some ski resorts. The rest of the year, there are only a few buses a day.

In a comment, you mention that you're arriving in Geneva on a Sunday. Your best option by public transport would be to take a train to Frasne and then that bus you found. The train trip to Frasne takes a little under 2 hours with a local train to Lausanne and then a TGV to Frasne. Note that you must book in advance on the TGV.

However the connections aren't good: the buses are scheduled to connect to trains from Paris, not from Lausanne. Chances are that the place where you're staying can pick you up, if not in Geneva, then at least in Vallorbe which is served by Swiss local trains (every hour on Sundays). If you can't get a pick-up in Vallorbe, you can get a taxi. It's a small town, so I recommend that you book in advance (maybe from the airport in case your flight is delayed; Swiss trains are very reliable). The local taxi company estimates the fare at 44 CHF, and according to this site they accept cards (in Europe, that means Visa and Mastercard).

The right bus appears to be 33802, leaving Vallorbe at 5:53 AM and arriving in Métabief at 6:16 AM. (The second page lists buses going in that direction.)

Unless you have a very specific reason to only take the bus you can also get from Vallorbe to Métabief by taking the train (TGV) to Frasne first and then change to a bus there. 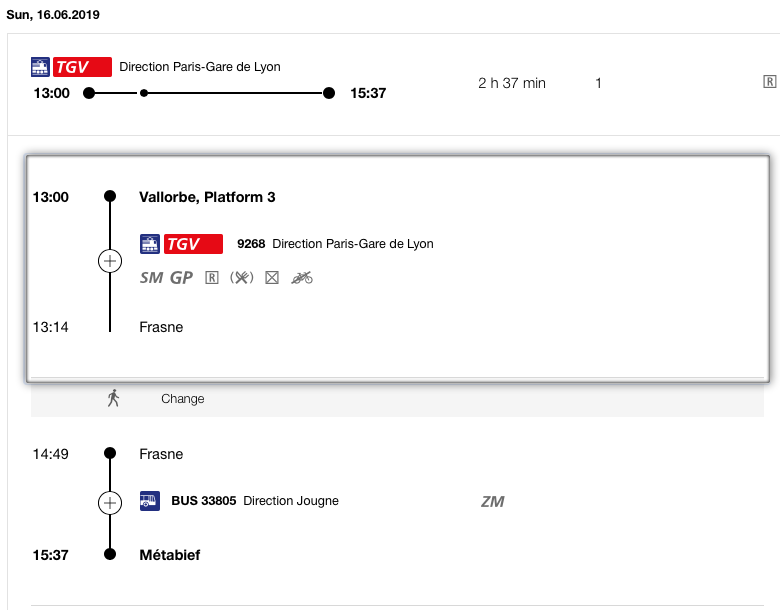 Not the answer you're looking for? Browse other questions tagged france buses or ask your own question.

6
How to get from Geneva Airport to Metabief, Doubs, France by public transport?

4
About inter-city and inter-country bus services in Europe
5
How to get from Belize City to Tikal?
4
Bus line 21 from Nice to Castellane
10
Do I need a Chilean identification number just to buy a bus ticket?
5
Can I cross the US border by bus the first time with a newly-issued visa?
4
Is Luong Yen bus station still operational?
3
How to read Donan bus schedule (Hokkaido)
6
Heathrow terminal 5 to East Croydon via bus with luggage
6
How to get from Geneva Airport to Metabief, Doubs, France by public transport?
4
Conflicting information for Crete bus routes