In the Loire Valley, are there any “arty” caves that can be visited?

The Tuffeau stone that makes up the bulk of the Loire Valley has been used for building for millennia, and this has left behind a lot of caves. It has also left us lots of lovely buildings too - most of the Chateaux in the area are made of the off-white Tuffeau stone!

For all of these popular three reasons for visiting the caves, any guide book or tourist information office will be able to supply you with places to visit, so we've no need of a question for that! However, the caves and the stone have wonderful artistic potential too, and yet looking through a guidebook you won't see anything about caves to visit for this. So, are there any caves that are "arty" that can be visited?

Self answering, as after much hunting I did find two, and I figure it's worth sharing!

What's different about the Bouvet-Ladubay caves is that in 2002, they had the artist Philip Cormand come into the caves to sculpt the rock. The rest is that around 400m of the caves feature small to large sculptures around their edges. Sometimes it's a pillar, sometimes an apparently ornate staircase, or perhaps just a small design in the rock:

Much much harder to find than that is the Helice Terrestre de l'Orbiere, near Saint Georges des Sept Voies just south-east of Angers. When you arrive here, it feels like you're in a small quary village, but the magic lies within... 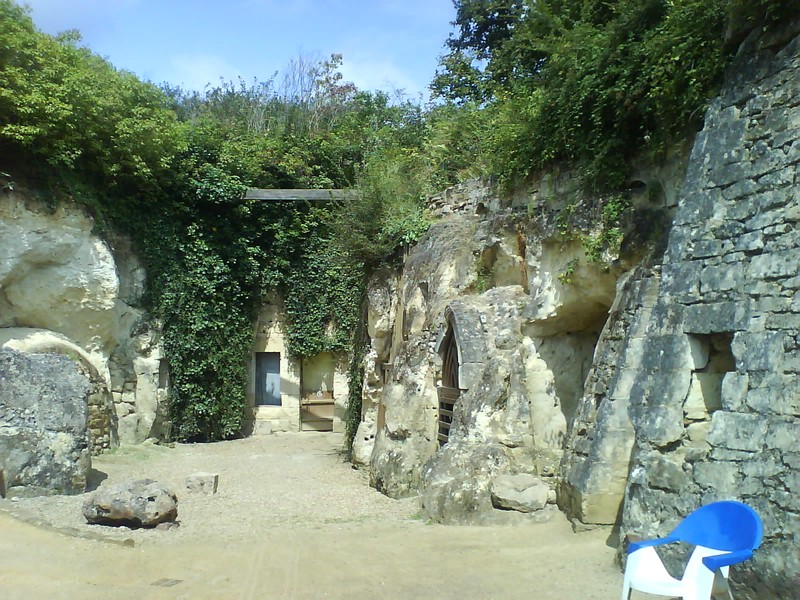 Inside, you discover the work of Jacques Warminsky, who has created amazing sculptures and patterns in the caves. Small passageways lead into giant carved chambers, on into rooms with a wonderful echo, and on past small carvings and then suddenly back into the sunlight. It's magical what can be done with the lights, the carvings, and tunnels. 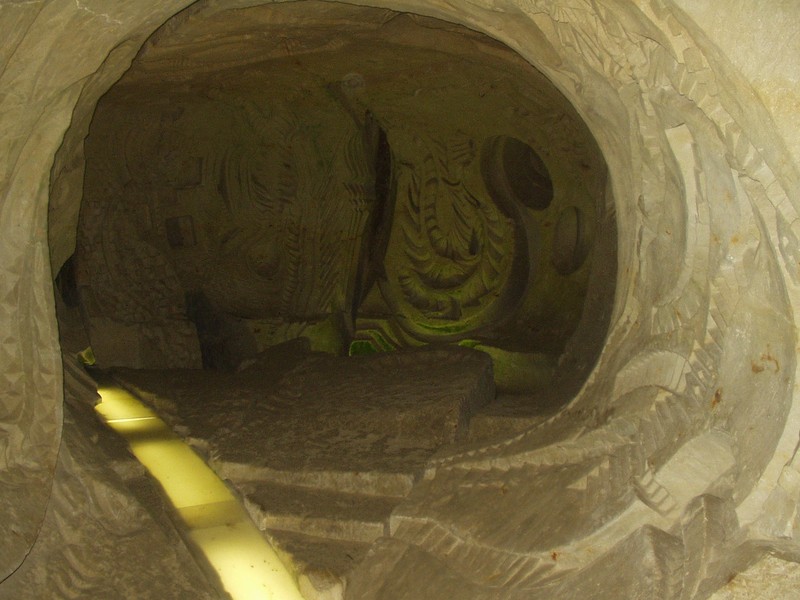 It's hard to do the caves justice with just a few photos, but luckily the Anjou tourist board have a virtual tour of one of the chambers to give you an idea!

I think you're "onto" something with your question, but the most interesting caves (to most connoisseurs) are a bit further south, in the Dordogne region in France, south and east of Bordeaux. These are appealing from both an art and archeological perspective because there are cave paintings done by prehistoric man.

The most famous of the caves in question is the Lascaux.

This is in contrast to the central Loire, which cuts west across France to Nantes. But some of the southernmost tributaries of the river approach the region of greatest interest.

There are a number of caves in the Loire Valley which have sculpted walls, as well as caves which serve as artists' studios. The Hélice Terrestre, which you mention, is superb, and Philip Cormand's sculptures in Bouvet-Ladubay, are, as you say, great. You can see considerably more of Cormand’s work in the nearby Pierre et Lumière, where he sculpted miniature versions of a number of Loire Valley monuments and bas-reliefs of whole villages.

For another winery with sculpted scenes on its walls, though of a completely different style, take a look at Les Caves Rupestres at the Vouvray winery Domaine Bourillon Dorléans. Some of the bas-reliefs were made by the local sculptor Zaeli, who has a cave studio in the adjoining village of Rochecorbon.

The caves of the Loire Valley, which usually started as tuffeau extraction quarries, are hard to compare to the natural caves of the Dordogne. They have their own charm, much of it owing to the new uses to which the Loire caves have been put.

I've identified 10 sculpted caves plus 14 artists' studios or sales rooms (and much more) located in Loire Valley caves in my eBook "Deep in the Heart of France: A Guide to the Loire Valley's Contemporary Caves", available at www.smashwords.com/books/view/148646. Enjoy!

Not the answer you're looking for? Browse other questions tagged france sightseeing caves loire-valley or ask your own question.

10
Which chateaux of the Loire are worth visiting?

22
Are there caves and tunnels under Tallinn, Estonia?
10
Which chateaux of the Loire are worth visiting?
12
Paris on a Tuesday - are the Louvre and the Pompidou Centre the only “big” attractions that are closed?
10
How to travel between castles in the Loire valley?
5
Is there an awamori distillery/factory/etc in Okinawa that does tours or allows visitors, with tasting/samples?
8
Are there any caverns in the Peak District suitable for young children?
9
River swimming near Chinon in France's Loire Valley
6
Are there any submarine group trips originating from the UK?
9
Are there any Squat houses in Paris?